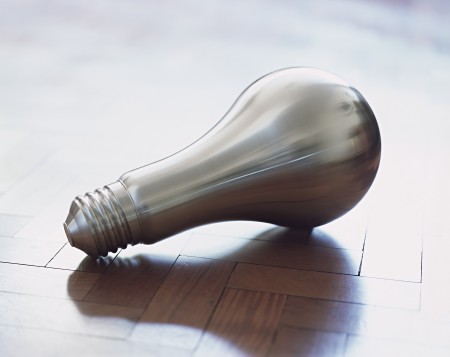 Iran do Espírito Santo is perhaps a fraud, maybe a riddle, depending on who crosses his path. If in the past he once gave viewers clues to his visual puns, in his recent solo show he decided to withhold everything. In an empty gallery, covered in painted stripes of varied grey, Espírito Santo reaffirmed an artistic existence ‘in between’ – seeking and often finding light in the gaps that separate the particular and the archetype, the familiar and the foreign, function and beauty. In what he calls ‘an open protest’ against the market values that govern contemporary art and encourage quick stardom and rocketing prices, he abandoned his signature sculptures and here produced no objects. In En Passant (2008) both floors of the two-storey gallery were emptied, save 52 strips of colour, gradating from white to black, applied in mechanical brushstrokes of equal width and calibrated tonal variation.

Whether Espírito Santo’s ‘protest’ is ultimately meaningful or not is difficult to assess (especially when seven of his works fetched tidy prices at Madrid’s Arco art fair just before this show opened). But more noteworthy here is the deconstruction undertaken in his production, doing away with any figurative or sculptural traces in order to explore new grounds. His previous mural ‘interventions’, reproducing the look of brickwork or wood patterns, although often read as pieces tending towards abstraction, always had the weight of reference to sustain them. They added to his investigation of the nature of representation. When he mimicked the surface patterns of the façade of the Brazilian pavilion at Venice inside that building in 2007, he laid bare the structure of the walls with all their particularities, creating an archetypal construct dissolving into space. The viewer needed little reorientation to engage with his visual conundrum.

His restricted palette – white, grey and black – which up until now was evidence of his clear Minimalist tendencies, in the recent show attained what Milan Kundera might term an unbearable lightness, revealing a willingness to push back on its perceived limitations just as Espírito Santo has elsewhere attempted to stretch the inheritance of Concretist experimentations in Brazil. Simply emphasizing the organized perception of light and its interaction with space, Espírito Santo reasserts his faith in forces still unknown to him to sort out the chaos of everyday experience.

In his youth Espírito Santo worked in photography laboratories, where every day he tested and observed the limits of light and its impact on photosensitive paper. With shades of grey a part of his daily routine, he learnt to see light assembled and deconstructed. When aspects of industrial design and production made their way into his practice, much work was put into reconstructing the very objects that produce light: candles, light fixtures, fluorescent bulbs.

Painting his stripes vertically on the ground floor and horizontally in the galleries above, Espírito Santo created an optical effect that hinted at what may be his latest obsession: instead of questioning representation in its pure state, he now wants to simulate the human eye’s experience with the incidences of light, regardless of what forms it takes. He doesn’t discard design, but he seems to make explicit that he trusts industrial patterns and machine-made drawings only to the point where they can be subverted, tamed and redirected to serve the purposes of art, exposing the underpinnings of his trajectory as a whole – straddling the divide between Walter Benjamin’s writings on art in the age of mechanical reproduction and the aura of the objet unique.

Although seemingly calculated and measured clinically, each shade was hand-mixed by the artist and assistants at his workshop, using regular house paint – a process combining artisanal variability and industrial pragmatism. Espírito Santo thus translates the work of a devout and skilled craftsman – laborious and born of personal experience – to the bare walls, achieving a monochromatic flood of light scaled to the size of an entire building that appears only on its surface to be painless, standardized, perfect and inhuman.