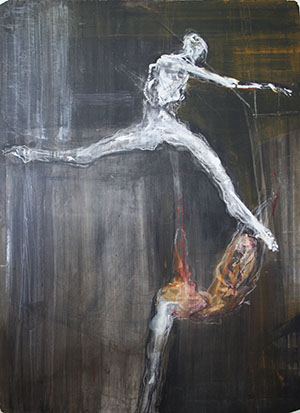 Isabel Rawsthorne’s art has long been eclipsed by her status as a muse to giants of the Modernist canon, among them Jacob Epstein, Alberto Giacometti and Pablo Picasso. Her life, in many ways, was her art: an itinerant, hedonistic existence that, for several decades from the 1930s, centred on the bohemian milieux of Paris and London. While her name has become synonymous with Francis Bacon’s ox-eyed portraits of her, Rawsthorne took little interest in publicity and enjoyed only a handful of solo exhibitions in her lifetime (the last significant outing of her work in the UK was the Mercer Art Gallery’s posthumous survey in 1997). ‘Moving Bodies’ at The New Art Gallery Walsall, an exhibition of her portrayals of dancers from the 1950s and ’60s, marked a reappraisal that was all the more timely in view of the prominence of dance in contemporary art practices, as reflected by ‘Dance/Draw’, organized by Helen Molesworth at the ICA, Boston (2011–12), or Performa’s recent colloquium ‘Why Dance in the Art World?’. Curated by Carol Jacobi and arrayed through two cabinet-scale galleries, it comprised 24 paintings and drawings as well as two pastiches of charcoal studies, including many previously unexhibited works.

Superficial parallels with Bacon and Picasso are traceable, whether in the pared-down backdrop of Fonteyn as Chloe (a spectral study in gouache, charcoal and chalk from the early 1960s), or the abundances of florid lines in several drawings. But such comparisons are ultimately a reductive disservice. If anything, Rawsthorne’s modestly sized sketches, gouaches and oil paintings – made from observation at Royal Ballet rehearsals in the years she worked as a stage designer – reveal her as technically adroit by comparison with Bacon. Looking at the sinuous, tautly-poised figure of Margot Fonteyn, one senses that this is how he would have liked to draw had he not disclaimed the practice.

Jacobi suggests that Rawsthorne’s agonistic dialogue with Giacometti – with whom she had a long, if unconsummated, romance – was the most significant factor behind her great innovation, ‘to replace the traditional still model with moving bodies’. (She later noted that, ‘Alberto was of the opinion that it was impossible to make a portrait in motion, that memory lasts one second.’) Of course, Modernist artists – Duchamp and the Futurists among them – had long grappled with the paradox of painting a moving figure, but the singularity of Rawsthorne’s images lies in their marriage of the analytical with the expressive. Movement from the Ballet La Bayadère 1, 1967, a painting of vaporous figures leaping against a streaking grey backdrop, absorbs the juddering geometry of Nude Descending a Staircase, No. 2 (1912), while channelling the powdery lightness of Degas’ dancers.

More recherché antecedents also suggest themselves. The skeins of meandering charcoal lines in Three Dancers (c.1965–70), on the one hand redolent of automatic writing, also strike a blowsy rococo note. Elsewhere, such evocations of Fragonard’s dashed-off marvels are brought up short by an abstract Constructivist framework (based, according to various accounts, on gridlines on the walls of the rehearsal spaces). The paintings’ evanescent figures and simplified palettes moreover anticipate the fragile figuration of artists such as Rachel Howard.

At once arcane and oddly contemporary, Rawsthorne’s protean styles cohere into a kind of Janus perspective. The allusions and presentiments well up and dissipate much like the sylph-like dancers themselves: transience is the overriding quality of her work. As the curator observes: ‘Isabel saw drawing itself as movement. Every mark is a motion.’ Indeed, Rawsthorne’s sense of the conceptual connection between drawing and dancing closely anticipates the ‘new dance’ of the 1960s and ’70s, which also emphasized literalism over mimesis, and the porousness of generic boundaries. (Annette Michelson’s praise of Yvonne Rainer’s Trio A in Artforum in 1974 as ‘asyndetonic, proceeding from phrase to phrase, without pause or transition’ is improbably pertinent to Rawsthorne’s drawings of more conventional choreography.) This very open-ended quality – dance’s capacity to translate or traduce other art forms – has been exploited in contemporary practices as diverse as those of Pablo Bronstein and Elad Lassry.

It is crucial to Rawsthorne’s works that they show dancers rehearsing rather than performing – unshackled from narrative or musical ornamentation, individuals rather than archetypes. There is an oscillation between the idealized ballerina and the reality of the human subject, between the dance and the dancer. It seems strangely appropriate given Rawsthorne’s identity not only as a ‘symbol’ of the mid-century avant-garde, but (as this exhibition reminded us) a woman and artist in her own right.

James Chaill was runner-up in the Frieze Writer’s Prize 2011.