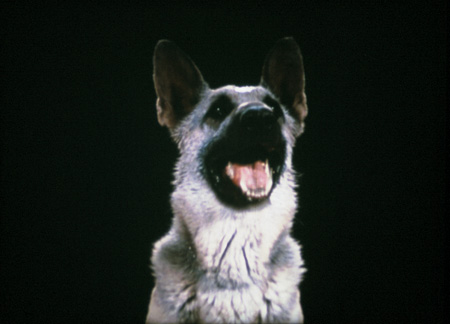 Talking to Morgan Fisher in 1977, Jack Goldstein described his practice as: ‘taking loaded images and reducing the symbolism. They all of a sudden take on a new meaning, but you’re left with some old meaning that lingers on at the back of your mind. What interests me is that the space between your head and your heart, that is, your throat. It’s like getting some phlegm caught in your throat and you try to clean it but it’s still there.’ Best known for his short colour films made in the late 1970s and his inclusion in the 1977 exhibition ‘Pictures’, curated by Douglas Crimp and Helene Winer at Artists Space in New York, Goldstein has often been situated at the turning point from the performance of the 1970s to the image-led practices of the ’80s. Yet his remarks point to a more complicated endeavour than the wrenching of signifiers from signifieds that has often been understood as his generation’s modus operandi. Nottingham Contemporary’s retrospective is Goldstein’s first solo show in the UK; since his death in 2003 his work has received renewed recognition – his influence on a younger generation of artists was acknowledged by the institution’s concurrent show of the work of New York-based Anne Collier. This gave UK audiences the rare opportunity to reappraise Goldstein’s practice by positioning better-known films – such as MGM (1975) and The Jump (1978) – alongside documentation of his contemporaneous performances as well as his later paintings and text-based work.

In his revised ‘Pictures’ essay for October in 1979, Crimp described the ‘psychologized’ sense of Goldstein’s work and its articulation of ‘foreboding, premonition, suspicion, anxiety’, yet this was not borne out here. The films are sharp and brightly coloured, over almost as quickly as they start – A Ballet Shoe (1975) is just 22 seconds – and there is little in the way of angst or rising tension. When we are offered a denouement it is either a cliché, irrelevant or never actually arrives: a bird falls off its perch; the promised feature film is never shown. The glittering rotoscoped figure in The Jump is so far removed from its source material – footage of a high-diver in mid-air – that what it depicts is almost irrelevant, but the action’s significance is rooted in its elegance, a looping rhythm and arched body twisting across the screen. Curators Alex Farquharson and Jim Waters’ decision to show all the films simultaneously in one gallery, rather than in a sequence on a single projector, allowed for several correspondences to become apparent. For example, as the MGM lion roared across the room, the Alsatian in Shane (1975) barked back, all teeth and tongue. This synchronicity had the cumulative effect of breaking down the films’ linearity.

The bodies and objects in Goldstein’s short films have a modest charm. Butterflies (1975) shows a hand against a cerulean background, a paper butterfly attached to each outstretched finger; as the fingers begin to move, the insects themselves dance as if they have a life of their own. Goldstein worked with professional filmmakers for the production of these works, and these everyday objects are given the full Hollywood treatment; stars in their own right, a knife or a plate holds us enthralled. This objectification is echoed in the sound pieces: here ‘Suite of Nine 7-inch Records with Sound Effects’ (1976) was displayed in a vitrine, but with headphones to listen to the recordings, the purple of A Tornado (1976) summing up what extreme weather might look like if made of plastic. In the little-known ‘Totems’ (1988–90) this approach is extended to text, as mottos are stacked on top of one another, bent and contorted so as to become just another element in a composition.

This tension between what objects are and what they represent is what complicates Goldstein’s use of imagery; the ‘phlegm’ of representation is where human investments – both collective and personal – clash with the object, whose materiality does not bear them out. His paintings put this tension in motion, speaking of our investment in an image but also the images’ investment in us: Untitled (1983) resembles an early MTV video, its heavily powdered surface is seamlessly artificial; red headlights zip across the surface in another, green explosions of fireworks above a harbour scene resembling illustrations from a holiday brochure.

In Goldstein’s final work, Underwater Sea Fantasy (1983–2003), scenes of a molten landscape and a distant erupting volcano give way to a sea of fish twisting through coral structures. As shifting shoals pulse in and out of abstraction, life becomes form and then resumes figuration. This literal and metaphorical mining of the image thwarts the received understanding of Goldstein’s practice, in which appropriation-based work is little more than a theoretical exercise illustrating how representation is nothing more than a tissue of signs.
While it may be true that, as Crimp wrote, ‘underneath each picture there is always another picture’, in Goldstein’s work there is a lot more there too: underneath but also on the surface, both in and of itself.