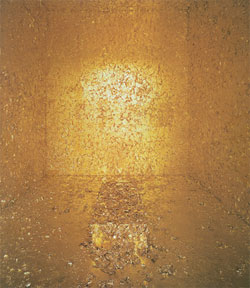 The first time I realized the full performative potential of letter-writing was at a James Lee Byars show. The Detroit native, who died in Cairo in 1997, often composed his letters as folded drawing–sculptures decorated with a star-like script that was hard to read. Each one seemed like a kind of formal challenge to decipher the message and, in so doing, complete the artwork. Others, though, were explicit invitations. In 1972, perhaps inspired by Elvis Presley’s ‘successful’ correspondence with Richard Nixon, Byars invited the President and other world leaders (via the more readily legible medium of the telegram) to visit ‘Documenta 5’. If Nixon had decided to attend, he would probably not have realized that the man standing on the roof of the Friedericianum shouting random German names through a golden megaphone was his host, but we can assume that Byars would have enjoyed the resulting confusion. (Just in case he might be spotted, he had concealed himself beneath a cloak of red silk.)
Always half showman, half recluse, Byars’ announcement for a show in Amsterdam in 1975 invited the public to watch for ‘flash showings’ of his paintings in ‘quiet places out in the city landscape’ – situations consisting not of canvases (of which Byars only ever made one) but of actions where the artist dressed in a golden suit and held up a long gilt pole. Early in his career, during the decade he spent mostly living in Japan (c. 1958–68), Byars did in fact make paintings – or rather, large black ink drawings – featuring dense iconic shapes that assume a kind of sculptural weight. This body of work, three examples of which were included in the Whitney’s ‘James Lee Byars: The Perfect Moment’, hints at Robert Motherwell, but the comparison is probably a misleading one; it is Richard Serra’s later drawings that allude back to Byars. Echoes of his sculptures from this period – those that, like his letters, were formed into three dimensions from many sheets of paper – show up in Serra’s painting-infused sculptural actions of the late 1960s.
The way these early drawings hang faintly between Motherwell and Serra points to the difficulties involved in measuring Byars’ significance. At times that assessment feels too dependent on art-historical developments necessarily beyond the scope of the work itself, frequently relying on a kind of anti-definition against various constructed categories. With many under-recognized artists it is often easiest to suggest that they beat the big boys (such as Serra) to the punch, or problematized period orthodoxies. On this latter point we can look at Byars’ marble sculptures, for example, and note that they have only the appearance of classically Minimalist austerity; as has been pointed out, the sparkle of the Thassos marble Byars sometimes employed speaks to his insistence on their gorgeousness. The Little Red Angel of Marseilles (2003), composed at the Whitney of 333 croquet-ball-sized red glass spheres, bore the Minimalist trait of repetitive materiality, but the shape of its arrangement on the floor remained baroquely ornamental, its jewelled luminosity transcendently decadent.
Dave Hickey wrote in 1993 that Byars’ Minimalism ‘is, clearly, not Minimalist; his historicism is nothing like pastiche; his theatre, purged of angst and drama, is simply too theatrical; and he has no taste for the banal. Further, his politics are not Western enough; his Orientalism is not mystical enough.’ Although Hickey intends otherwise, his approach has the unfortunate effect of making Byars’ position seem somehow outside the narrative – just as we always, incorrectly, thought – rather than occupying a central place within it. Byars may indeed have been a nomadic interloper navigating between cultural and artistic polarities, but when we define his achievement against them, we enable a kind of vague demotion as we lift him up. This feels awkward, as much as it feels true.
It seems obvious that we find Byars interesting because of this awkwardness, a discomfort provoked partly by his categorical slipperiness and partly by his enthusiastic sincerity, a trait that endured well after irony galloped into town on the back of a golden boy from Pittsburgh. But Byars is also unsettling, not least because he was so clearly ill at ease with just being an artist. His theatre is, in the end, full of this angst. We respond to it, however well it fits later readings of Byars’ work, because his brand of self-denial feels so pathological that it becomes humorously absurd. Roland Barthes’ idea of authorial death was ideally suited to this anxiety; steeped further in Eastern notions of transience and ephemerality, Barthes provided a framework for Byars’ escapism – what Klaus Ottmann describes as ‘part strategy of disappearance, part implacable honesty’. Death, and the ‘perfect’ moment of present consciousness that he strove to create, were the antipodes that bracketed Byars’ art.
The supposed highlight of the exhibition was a recreation of The Death of James Lee Byars (1994), a gold-leafed room originally made in a Brussels gallery, within which Byars lay down dressed in a gold suit and ‘vanished’ – practising his own death, as it were. Here the flirtatious gaudiness of the space and the dirty transcendence of the gold leaf ultimately lacked both the flirt and the dirt that Byars’ intrepid showmanship must have provided in the original. The piece succinctly illustrated the curatorial difficulties inherent in this kind of institutional re-presentation: without any connection to his physical presence the aura was lost, almost even beyond imagination. We may have been left worshipping at the stage, but James Lee Byars had finally left the building.