Jamian Juliano-Villani’s distorted toonlands hark back to the 1980s era of postmodern collage and its gaudy imagist configurations. The New York-based artist splices together material from her voluminous archive of overlooked comic artists, including figures like the Jamaican reggae artist Wilfred Limonious and the rebel adult animator Ralph Bakshi. Trawling the web and bookstore basements alike, Juliano-Villani amasses thousands of appropriated images torn from high-school yearbooks, horror-novel mood-boards and cult comic strips. She then works by projecting the images onto her canvas, using several projectors at once to build up surreal landscapes that force different styles and aesthetics to exist on one plane.

For her solo exhibition, ‘The World’s Greatest Planet on Earth’ at Studio Voltaire, Juliano-Villani has produced seven new, large-scale paintings and her first sculptures to date. A bendy wooden hammer sits on the gallery floor as it hits a nail into its own handle – a moment of pure comic-book slapstick. Nearby, a stack of white wicker chairs with tennis balls on their legs poke fun at country-club pomp. Meanwhile, the surrounding paintings conjure scenes that deliver, like the sculptures, one quip after the next. On one canvas, a woman with a crane fly for a head cruises through a cartoon cemetery; on another, a jukebox is on trial in a US courtroom. The jukebox, a glossy 1955 J-L Seeburg, also stands in a corner of the gallery, modified to play recordings of Juliano-Villani’s mother as she chats indiscreetly down the telephone or recites her daughter’s biography from a script.

The works often contain some form of self-reflection, with Juliano-Villani employing appropriations to sketch out her own idiosyncrasies. My Memories Projected in the Hallways of the Titanic (all works 2016) shows a vast, columned hallway of the doomed, transatlantic vessel. In the foreground, a Disneyesque figure with a fat, pink jewel for a body escapes up a staircase – a proxy for the artist herself. Above, a strange assemblage of images are conjured in mid-air: perfectly white gym shoes, what looks like Thomas the Tank Engine’s screaming twin and the LaCie archive on which Juliano-Villani’s source images are stored.

On the opposite wall, Stick Drawing for Help is an explicit self-portrait, which shows the artist in her bedroom. Garish lamps twinkle from various tabletops while Juliano-Villani sits on the bed, staring despondently at a green astroturf carpet on which the word ‘HELP’ is etched. The artist’s painting technique mimics the effects of digital post-production in paint, and she loads the imagery with a hyperreal shine. Everything appears to glisten with theatrical aftereffects.

On occasion, it can feel like Juliano-Villani’s paintings are victims of their own success at simulating the world of throwaway images. Set in a nursery, Blue Marina collates a fat, fluffy teddy bear, a molecular chemistry model and a violin, all lying inside a child’s cot. Here, her painting is literally at its thinnest: the canvas is visible through superficial layers of paint. The resulting composition is stranded between virtual and concrete, and not quite at home in either.

On the far wall of the gallery is The Sirens, a sinister portrait of a bruised Olympic swimmer as he breaks the surface of the water. The yellow necklace of the swimming lane doubles as a row of gigantic teeth and Juliano-Villani has spliced in a recorder for the gasping swimmer to play. The violence that charges this painting is double-edged, created not only by the elements set up to jeopardize its protagonist, but also its flippant tone: the violence of the mindless deformation of objects and ideas. 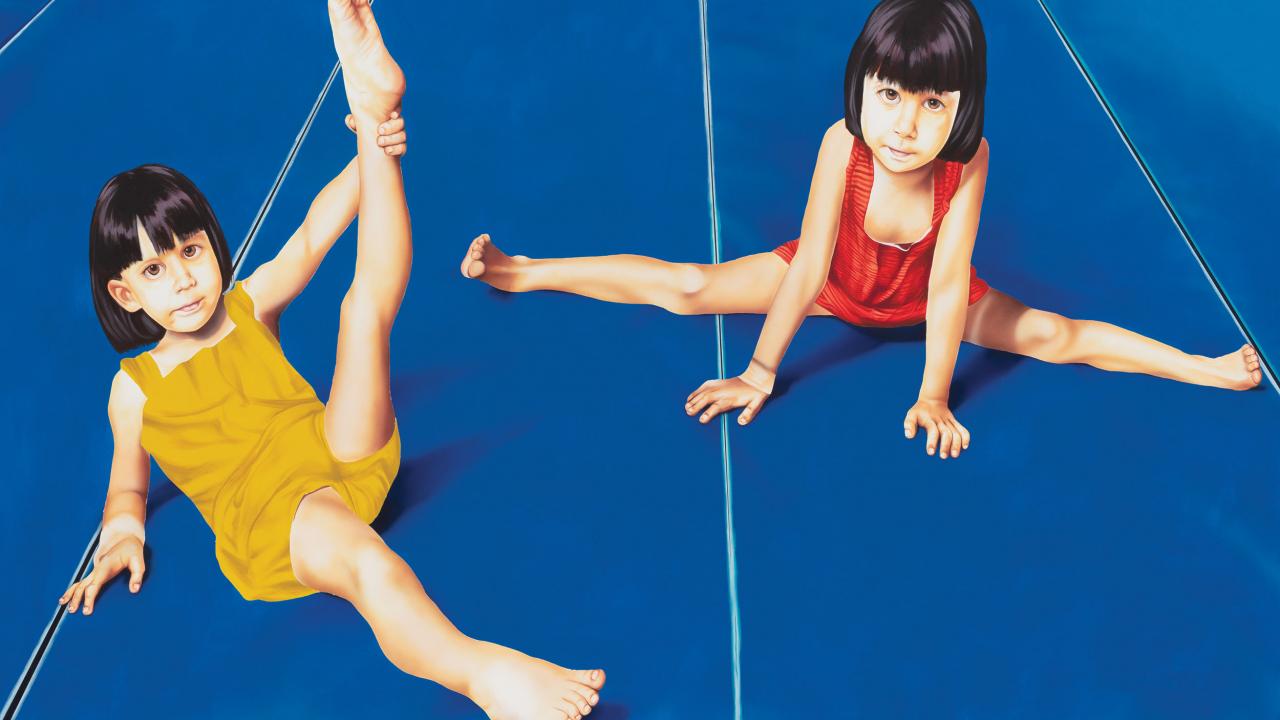