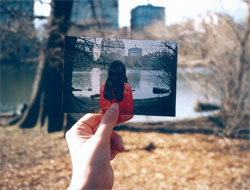 In her most recent piece, Her Long Black Hair (2004), the site-specific audio walk she devised for Central Park, Janet Cardiff doesn’t so much talk to you as try to occupy your mind. She uses the park and the surrounding city as stage set and backdrop for her dérive, retaining surprising control in a changing, unpredictable public setting. By turns confiding and authoritative, Cardiff has the true listener’s mastery of sound: she knows what needs to be heard, accreting sonic details to compose a soundscape both seductive and eerie.
The 35-minute walk took a circuitous path through the heart of Central Park. Tucked casually into the pouch of the CD player were five photographs of sites throughout the park, three of which show an unnamed black-haired woman, around whom much of the narrative is based. Cardiff’s voice seems to emanate from within your head rather than from outside your ears, a level of intimacy both beguiling and invasive. As in her earlier pieces, Cardiff uses binaural recording techniques that envelop you in crisp, freshly minted sound. The still audible background din of the real city becomes a muddy bass line to the crystalline acoustics, with each enhancing and overlapping the other.
Obeying her occasional directions to the listener to stop (coming to a standstill being perhaps the hardest of all feats for a New Yorker), walk backwards and even take a few steps with eyes closed, feels both publicly foolish and appealingly risky. ‘We’re in this together,’ she implies, ‘but I’m in charge.’ Cardiff is adept at creating a slightly sinister mood, though far less as a result of her storyline than through the choices she makes in the complex ambient sound. Like filmmaker David Lynch, she has a gift for finding the creepy in the humdrum. Snatches of mundane conversation, the sound of footsteps (that horror film standby) and even the quacking of ducks become alienating rather than reassuring. Amplifying this are her sharp-eyed observations, which make random real events seem intentional or predetermined: she mentions an Asian wedding party at the Bethesda Fountain and, as if on cue, you find an actual bride and groom posing for their photograph at the very spot.
Cardiff makes repeated references to the Classical myth of Orpheus, and to his tragic inability to resist the prohibited urge to gaze on his beloved Eurydice before leading her out of the underworld. Not surprisingly, she plays both overtly and obliquely with permutations of black and blackness and with references to unconsciousness (blacking out) and descent (flights of steps are well used), and uses the park’s several dank tunnels and passageways. (Music includes parts of Gluck’s Orpheus and Eurydice from 1762, as well as a few lines of Rap and an a cappella version of ‘Motherless Child’.) She constructs a non-linear story around the unknown woman, who remains as remote and untouchable as Eurydice, and whose photographs connect the dots that shape the walk. Cardiff maintains that the photographs were ‘found’, but they look deliberately mystifying, even contrived. The speculations about the woman’s back-story feel laboured and, although the entirety of Her Long Black Hair is haunting, those images and their attendant tale are not.
For good measure Cardiff mixes quotations from Charles Baudelaire and Søren Kierkegaard (both inveterate walkers) with an excerpt from the slave testimony of Harry Thomas, who in 1850 escaped north to Canada on foot. She touches on the history of the park itself, on the Great War dead honoured by one of its groves, and on the bones discovered during its construction. Interwoven are personal flashbacks about living in New York and the strangeness of her younger self, who ‘seems like a different person from me but somehow I have all her memories’. Ordinary observations sometimes veer from the personal to the historical, as when you hear gunshots and she casually mentions that ‘they’re shooting the scavenger wild goats and pigs that were supposed to eat the garbage’. The line sounds like an out-take from Bob Dylan’s song ‘Desolation Row’ (1965) and is a jarring example of her occasionally self-consciously precious prose.
Cardiff’s attentive and first-rate skills as an observer compensate for the occasional narrative misstep. The seemingly casual confidences – she wants you to walk ‘with’ her, she wonders if there’s someone ‘behind us’ – make her oddly present. She’s especially astute about walking itself as a kind of constant balance between where we’ve been and where we’re going, past and future. Walking is one of our strongest links to our ancestors, and Cardiff makes cunning use of this deceptively simple activity to make you more collaborator than passive consumer. By the time you’ve unclamped the earphones she has managed to superimpose her world on yours, and the trees, pigeons and even fellow strollers all seem part of Cardiff’s scheme.