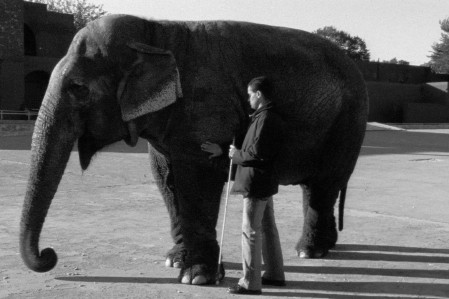 A warm tyre, a vulture’s wing without feathers, a plastic wall, curtains from a mansion: these are descriptions offered by the subjects of Javier Téllez’ latest film, six blind people confronting a four-ton metaphor. Letter on the Blind, for the Use of Those Who See (2007) realizes the famous parable, documenting an encounter between a group of blind New Yorkers and an Indian elephant. Yet the work is not so much an allegory as a drama of local perceptions. The five men and one woman sit on chairs in the centre of an empty, derelict Brooklyn public swimming-pool and, one by one, come forward to meet the animal. They share on-the-spot impressions and, in a voice-over, offer commentary on their separate histories. The stately pace of the film, keyed to the participants’ careful movements, creates a heightened, ritual feel. Shot in intense, high-contrast black and white, almost entirely in close-up, the elephant becomes less a recognizable form than a tactile expanse, its craggy hide frequently filling the entire screen. Like the Denis Diderot (1749) essay from which it takes its title, Téllez’ film commissioned by Creative Time, is an exercise in translation between the senses, an experiment in synaesthesia.

It’s a quixotic project, this attempt to visualize the unseen, but an apt one for the Venezuela-born, New York-based Téllez. Over the past decade he has worked with ‘invisible’ populations: the disabled, the poor and those institutionalized for metal illness. That the concept of ‘working with’ is linguistically – and politically – ambiguous is precisely the point. These marginal communities are, essentially, Téllez’ medium. At the same time his film, video and installation-based pieces grow out of and encompass extended collaborative work with his subjects. He walks a tricky, often unsettling line. He flirts with – and yet avoids – the twin perils of exploitation and do-gooder-ism, deriving ethics and aesthetics from the situation in which he finds himself.

If it’s possible to be born into such a role, Téllez’ autobiography would qualify him. The son of two psychiatrists, he grew up tagging along to the institution his father supervised. At a yearly festival there were beauty contests: doctors and patients would, for a day, exchange uniforms. Such carnivalesque reversals remain a powerful trope in Téllez’ work. One Flew over the Void (Balla perdida) (2005) – created for inSite, a biennial event straddling the Mexico/US border – is literally a carnival. With residents of a Mexican mental institution the artist developed a public spectacle – part circus, part protest march – around the theme of borders, literal and metaphorical. The rally culminated in a professional human cannonball being shot over the fence dividing Tijuana and San Diego.

Bizarrely resonant images such as this, simultaneously absurd and heady with reference, form the core of Téllez’ projects. In the video El león de Caracas (The Lion of Caracas, 2002), a stuffed and mounted lion makes its way down the vertiginous steps of a hillside Caracas shanty town, borne by four uniformed police officers. The lion, symbol of the Venezuelan capital, here takes the place of a Holy Week saint, while the procession also recalls the all too common ritual of police carrying a corpse out of the ranchitos. As giggling children rush forward to touch the immobile animal, the cops shuffle awkwardly in the background, all enlisted in a strange portrait of power and powerlessness. For You Are Here (2002) Téllez presented patients of an appallingly medieval Venezuelan mental institution with an enormous inflatable ball, a super-sized version of a stuffed cat toy. Rolling it through the labyrinthine corridors and out into the courtyard, they somehow spontaneously conspire (after many harrowing minutes of the blackest of slapstick comedy) to push the huge object over the wall, effecting its escape.

La Passion de Jeanne d’Arc (Rozelle Hospital) (The Passion of Joan of Arc, Rozelle Hospital, 2004) offers a more elaborate intervention. Téllez spent a month in workshops with a group of 12 women at an institution in Sydney. After viewing the Carl Dreyer film La Passion de Jeanne d’Arc (1928) the patients wrote new intertitles. Unsurprisingly, they reconceived it as the story of ‘JDA’, committed for believing she was Joan of Arc, ‘suffering from grandiose visions and auditory hallucinations’. Presented as a two-channel piece, the revamped silent film is accompanied by a series of intimate interviews with the co-creators. One woman conducts a dialogue with a marionette therapist, perfectly ventriloquizing the language of the professional mental health worker; another reads journal entries detailing her electroshock treatments. A young woman offers a giddy monologue of her institutionalization, while explaining her knowledge of Morse code through a past life memory. Suddenly, she breaks into song, a moving hymn proclaiming her resistance to rules and bureaucracy.

In the words of British psychologist Adam Phillips, madness ‘is defined, so to speak, by what it elicits in others’. And it is precisely through definition that the so-called mad are contained, administered and treated, in ways that are more or less useful, more or less humane. Téllez’ work manages to escape this logic: it is designed to elicit a response while circumventing the structure of definition altogether. He offers nothing as positivist as a ‘position’ on mental illness, and certainly nothing in the way of a cure. Rather, his odd and compelling spectacles embrace the irrational as a method of translation pressed to its limits. They are a series of letters on the mad, for the use of those who think themselves sane. 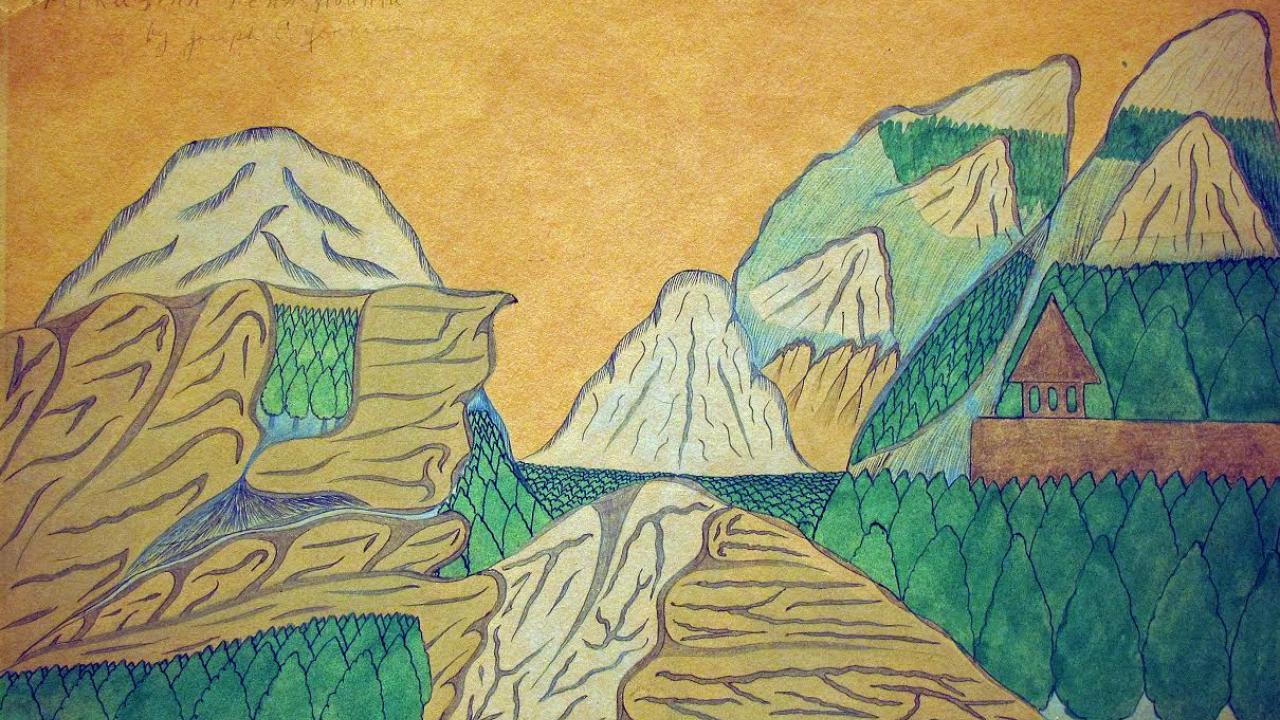 Frieze
The Doors of Perception: Beyond the Flat World of Appearances 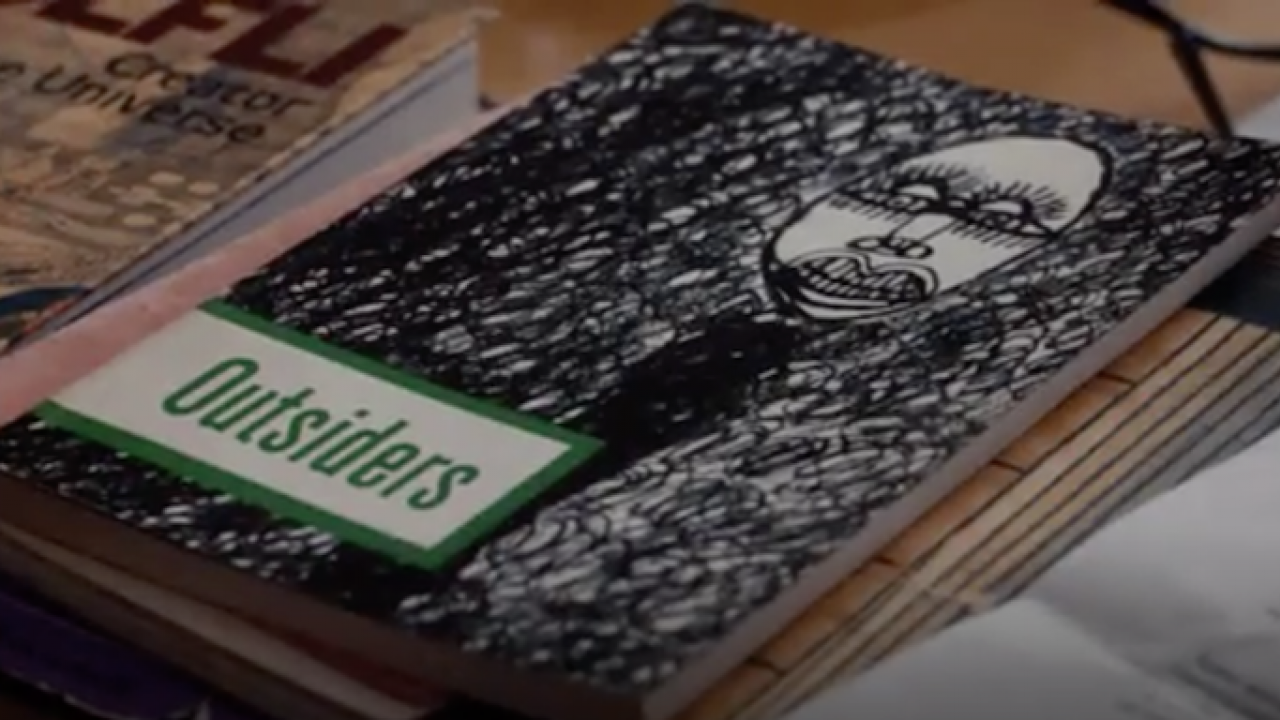 Frieze
Javier Téllez: ‘For me, the stigmas around people who are different don't exist’

The artist talks about curating ‘The Doors of Perception’, an exhibition of visionary self-taught artists at Frieze New York 2019 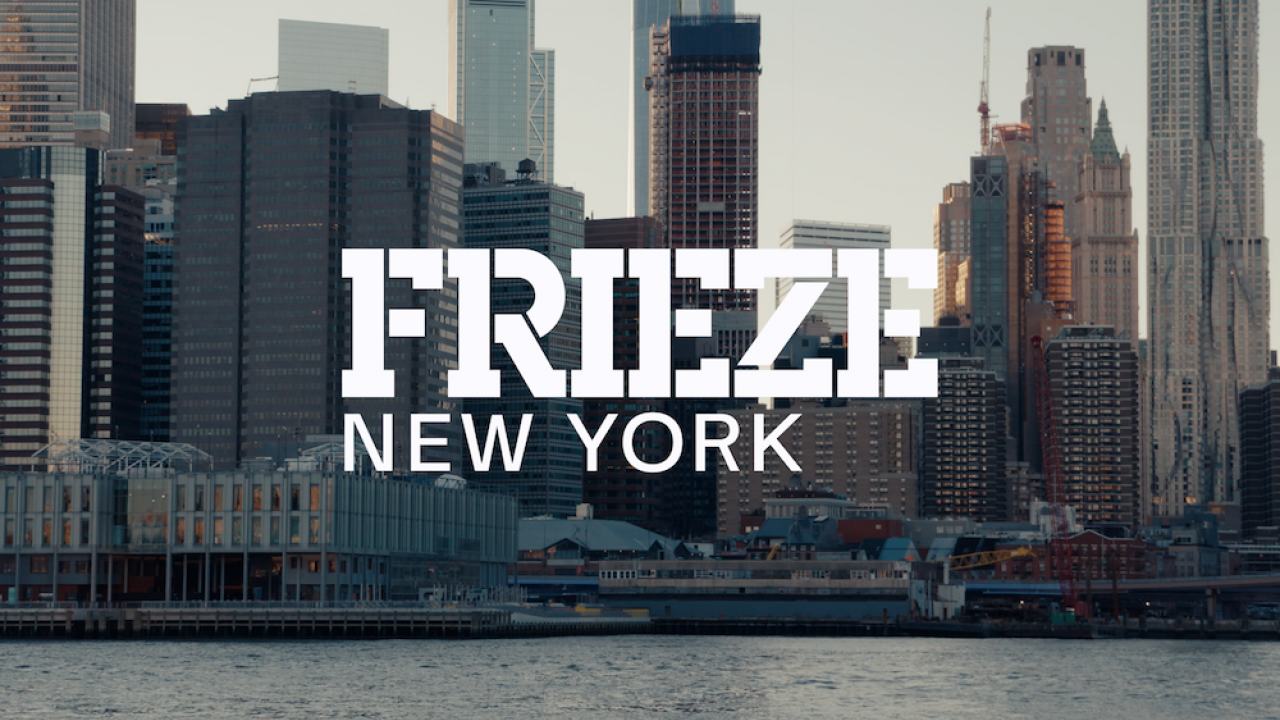 In this series, we hear from those involved in shaping the program Frieze New York 2019 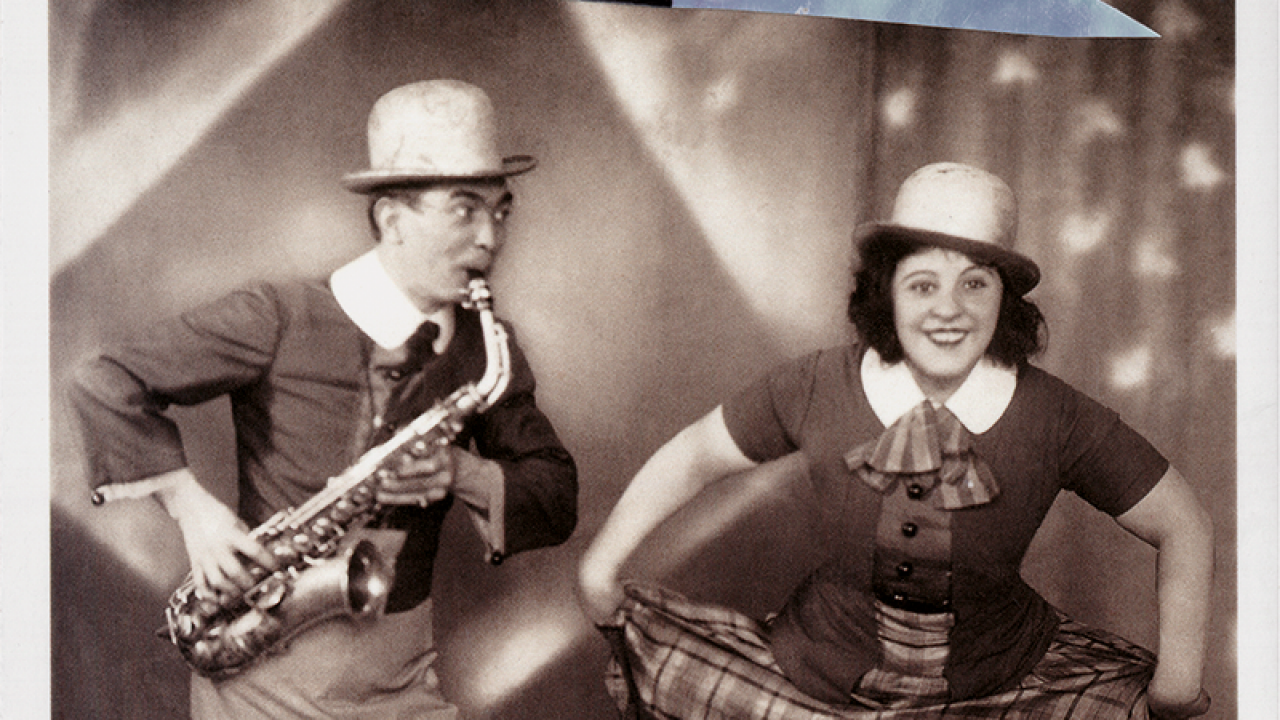