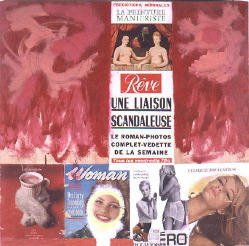 For an artist so infamous in France, Jean-Jacques Lebel remains strangely un-famous in the UK. Despite major retrospectives in Paris, Vienna, Budapest, Hamburg and Milan, this show at the Mayor Gallery was his first one-man exhibition in London. One problem could be Lebel's biography, which is simultaneously illustrious and obscuring. An old-school Surrealist by birth, Lebel grew up alongside Marcel Duchamp and André Breton. The former was a fan, who attended Lebel's happenings in the 1960s and praised their Dada spirit; the latter was one of his harshest critics, who expelled him from the Surrealists in 1960, citing his insubordination and rebellious tendencies.

Lebel was also a vital protagonist in the reciprocal relationship between America and Europe during the 1960s, working on both sides of the Atlantic with Claes Oldenberg, Allan Kaprow, Yoko Ono and Carolee Schneemann, whose seminal happening Meat Joy was performed in Paris at Lebel's Festival of Free Expression in 1964. Lebel also provided the first French translation of poems by Allen Ginsburg and Gregory Corso, and took Gilles Deleuze and Félix Guattari on a road trip around America, introducing them to Bob Dylan in the process. Lebel's position as prodigal son, however, is one that threatens to impinge on the reception of his work, by authors too seduced by tales of his (admittedly compelling) personal acquaintances.

The works displayed here cover Lebel's transitional period of 1960-5, from the schism with Surrealism to the apex of the artist's happenings. An iconoclast greedy for images, the culture clash evident in the techniques and iconography of Lebel's works is telling. The Surrealist forms of collage and frottage are pitched against a subversive spin on the imagery of American Pop art - celebrities are invoked not to glorify them, but to subvert them. The cast of characters ranges from the political to the pornographic, from the secular to the sacred. The social turbulence of the times, from the Cold War to the Algerian War, is vividly evoked by figures such as John F. Kennedy, Nikita Krushchev and Charles de Gaulle, while their images are provocatively juxtaposed with those of starlets and porn stars, culled from magazines. In some works, politics and celebrity unite, such as Christine Keeler Tabloid no. II (1963), testimony to the fact that even glamour girls can become accidental anarchists.

One of the strongest pieces is Portrait de Meret Oppenheim II (1964), which evokes the artist through knowing references to her work and sexuality. Oppenheim's Fur Cup (1936) is replaced with a kitsch advertisement for hot chocolate, in which the cup is wrapped in a fur stole with the tag line 'the drink that's as warm as mink'. The sapphic allusions present in Oppenheim's original and Lebel's take on it are made even more explicit through the inclusion of illustrations of scantily clad women.

Lebel's 1964 slogan 'Art is $hit' finds its counterpart in his L'epouse du Caudillo regardant Avida Dollars (The Wife of the Caudillo Contemplating Avida Dollars), of 1961. ('Caudillo' was Franco's official designation.) The work is a savage and scatological satire on Salvador Dalí; the title cites Breton's dismissive acronym of the artist, pointing to his twin fascination with money and excrement. Lebel juxtaposes plastic turds and coins, forming a crude portrait of the artist, mounted on a kitsch floral background and completed by a gold frame. Also, and importantly, the allusion to Spain's dictator General Franco reminds the viewer that Dalí had been one of his supporters.

One dimension is missing from the exhibition, however. Many of these collages served as backdrops for Lebel's happenings, such as the notorious Pour Conjurer l'Esprit de Catastrophe (To Conjure up the Spirit of Catastrophe, 1962) where two naked women wearing masks representing Kennedy and Krushchev, their bodies collaged with newspaper clippings relating the events of the Cuban missile crisis, shared a bath of what appeared to be blood. Collage, an almost archaic art form by the 1960s, was thus revitalized and incorporated into the very contemporary performances orchestrated by Lebel, which this display cannot fully attest to.

It is both appropriate and ironic that this exhibition coincided with the presentation of Paul McCarthy's installation at the newly opened Hauser & Wirth gallery around the corner in Piccadilly. McCarthy, an artist who readily acknowledges his debt to Lebel, has now had two major art events in London this year, while Lebel, in this country at least, remains a secret agent provocateur.