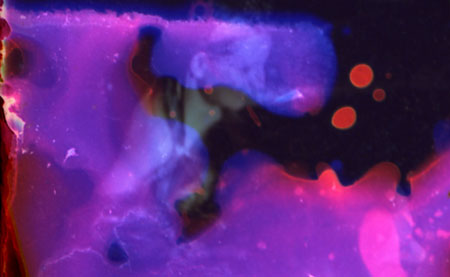 Many experimental filmmakers jettison the burdens of plot and continuity in order to attain higher conceptual ground. For LA-based artist Jennifer West, however, simply tossing out the fundamentals of film structure isn’t quite experimental enough. In her energetic New York début at White Columns she tosses out everything, including the camera, presenting two recent examples from her ongoing ‘Cameraless’ series of films.

Exactly how does one go about making a film without a camera? In West’s case, by marinating the stock in whiskey and then exposing it with flashlights, as she did in Naked Deep Creek Hot Springs (16mm film negative soaked in lithium hot springs water, Jack Daniels and pot – exposed with flashlights – skinny dipping by Karen Liebowitz, Benjamin Britton & Jwest) (2007). Or perhaps by soaking the header in coffee, rubbing it with workout sweat and scribbling on it the word ‘whatever’, as she did in Whatever Film (16mm film leader soaked in lots of coffee & espresso, taken on power walk, rubbed with sweat and inscribed with the word ‘whatever’ written in purple metallic eyeliner) (2007). Of course.

Projected opposite each other, the two films form an installation that pushes at the boundaries of ‘direct film’ by incorporating a performative element. Traditionally ‘direct film’ has been an experimental practice of drawing, scraping or otherwise manipulating film stock to create images. In the early 1930s Len Lye pioneered the practice with his films, including A Colour Box (1935), which presents a mass of jumbled movements and patterns streaming in and out of frame to a soundtrack of popular Cuban music. These ideas were further explored by experimental filmmakers such as Stan Brakhage and Tony Conrad, so West isn’t the first to make movies without a camera; however, she is perhaps the first to go about it like a mad scientist.

West begins the process by soaking 16mm film reels with everyday household solvents and alchemical mixtures of potions and then exposing the emulsion to direct and indirect light sources, including burning cigarette ends, sunlight and fireworks. The exposed footage is then transferred to DVD and projected at low angles and with a dizzying momentum of two to three frames per second. The results are vividly colourful, creating a psychedelic visual experience that only lasts about five minutes but could keep a psychedelic lightshow concert-goer transfixed for hours.

In Naked Deep Creek Hot Springs West used footage of herself and two friends skinny-dipping as a touchstone. As the film unfolds, fragmentary glimpses of the nudists appear semi-hidden behind electric blue and red splotches, playing a game of peek-a-boo. By drenching the negative in lithium and hot springs water – an obvious choice – pot and Jack Daniels (slightly less obvious), she imbues the film with the actual materials of the experience. Visually the scenes are tantalizing, but technically they lack the purest appeal of Whatever Film, which is truly camera-less. Here West inscribed the word ‘whatever’ directly onto the film header in surf-girl-glam, drugstore-brand metallic purple eyeliner. As the letters scroll down, an explosive barrage of canary-yellow lines and magenta arabesques masks them so that they appear more like scribbles. This carelessness embodies the gregarious apathy of a slacker persona; the humour is offhand and the So-Cal diction is instantly audible.

With both films West is more interested in the constituent materials and the specific words she uses to describe them – for instance, ‘Jack Daniels’ as opposed to plain ‘whiskey’ – than imagery. Eliminating the camera highlights the prosaic physicality of film as a strip of treated plastic in a way that allows the potions she applies to it and their descriptions to define the ‘movies’. Her wordplay and self-evident titles explore the relationship between cultural and physical associations; the intermingling of materiality, feeling and identity creates a wild blend of synaesthetic experience wherein the substances of life literally and figuratively colour the film.