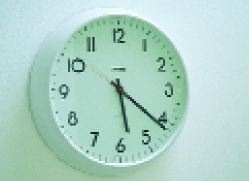 The first thing you could see on entering the gallery was a generic office clock, hanging on the wall. Bland and functional, there was nothing unusual about it. As the show's title 'Ouch! Noises in Objects' spelled out, Jeremy Deadman is not so much interested in the visible as in the intermediary space between the present and the dislocated, an off-scene dimension evoked by the interaction of the palpable and the audible. It was only after you entered the gallery that the time-piece started to work, but instead of ticking, it emitted a regular, individualised yelp of pain, each blurt more or less in sync with the taut strokes of the bright red second hand. This unremitting, expressive scream-machine was initially hilarious, but very soon queasily suggestive. Were these tortured groans a response to the emptiness of routines, the muffled agony of a dull afternoon at the office, or the fear of time being inexorably used up, a vague premonition of ultimate extinction? The humour of the work - aptly entitled Flayed (2000) - kept the existential overtones at arms' length. Deadman makes his objects speak, and, when successful, it's an animation which throws off metaphorical sparks, bringing the latent aura of the object to life.

As often happens when encountering a minor miracle, I immediately entered into a 'Doubting Thomas' inspection of the object, trying to tease out the machine from the ghost. Here, and with the other objects in the show - assembled from four years of ventriloquised object work - the screams turned out to be those of the artist himself, recorded onto CD, although there was no visual trace of the sound source. These mini soundtracks are effectively the documentation of a performance without an audience, the carefully prepared outpourings of a shy Nauman-esque clown whose humour often has a darker edge.

Although the rest of the show failed to live up to the opening salvo of wit, Flayed's absurd repetition and sinister humour recurred in many of the other pieces. Deadman's work might be best appreciated after an encounter with the try-hard gimmickry of other, more pompous, exponents of 'sound art'. Anyone who found the recent show 'Sonic Boom' (at the Hayward Gallery in London), long on interactive technology and short on ideas might feel a certain relief at Deadman's Arte Povera take on the sound object, a shift from ambience to sonic slapstick, whose aural impressionism is less Debussy, more Mike Yarwood. At its least effective, in a piece such as Portrait of the Artist as a Young Mouse (1999) - in which an old-fashioned transistor radio 'broadcasts' an interview with a bashfully self-deprecating Mickey Mouse - the effect is blurred, over-complicated, a little cheesey. However, in both Fridge (1996), a bald, white gloss canvas which buzzes and hums, and Ratrace (2000), a large cardboard box which emits the sound of the patter of scampering feet and a chorus of rodents crying 'me!, me!, me!', the art object and the expectation of a cool moment's contemplation was amusingly disrupted, Minimalist purity polluted with both comic and quizzical results.

Not only impersonating mechanical or non-human objects (the whir of the artist's fridge is really an increasingly strangled sort of drawn out groan in Deadman's rendition), but transferring noises from one sound world to another, Deadman's work combines obscene over-proximity with reductive but imaginative evocation. The rude physicality of his thrown voice fills in and travesties the spectral space which an older, purer order of art sought to defend; on the other hand his vocal supplements to the object conjure up imaginary scenes: the invisible rats scuttling around his cardboard rat race have clearly defined personalities - some are squeaky little varmints, while others are thuggish, gruff voiced bruisers. All of them are as vivid as a Tex Avery cartoon. What is withheld from the visible returns in the listening viewer's well-schooled cartoon imagination.

Deadman's effects are bathetic, or even ridiculous, rather than sublime or atmospheric, with the deflating effect and rapid fire structure of a more or less well-timed gag. If anything, bringing these pieces together in one space detracts from their power. These booby-trap objects would work best as guerrilla interventions, unexpected undercover intrusions, in the environment of a group show where their double-takes and non-sequiturs could ricochet off the other, probably more sober objects around them. Funny ha-ha and funny peculiar, Deadman is a very English exponent of latter-day, de-sublimated Surrealism, shyly exploring the latent sadism of the inanimate, but falling a little short of the tragi-comic double-whammy.