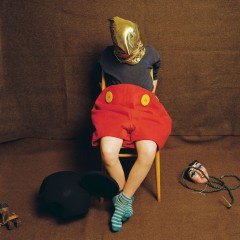 It was difficult, at first glance, to identify a focal point in Jirí David’s exhibition, ‘Preliminary Retrospective’, which seemed to neatly echo the experimental versatility of the artist’s oeuvre as a whole. But it was there, half-hidden in a rather inconspicuous painting called Biography (2005). This nude self-portrait depicts the artist both frontally and from behind, while a written confession takes up most of the remaining surface of the canvas. Biography is revealing on a very intimate level, in which bodily presence plays the key part: the figure of the artist – wearing an expression of confusion, vague worry and embarrassment – meanders in the profusion of words, which includes rather detailed descriptions of bodily functions like sweating and farting.

Such excesses of meaning and such slippery corporeality have been mainstays of David’s work from the outset. When he removes symbols from their usual contexts and brings them together to clash in a painting or an installation it’s never just an intellectual gesture. It was, however, precisely such a flat and superficial interpretation that accompanied his famed public installation of the neon Heart over the Castle (2002), which shone over Prague Castle – the official presidential seat of the Czech Republic – when Václav Havel departed the political scene in 2003. (The heart is the symbol that Havel incorporated into his signature; however, in its neon version, it contrasted sharply with the ‘sacred’ character of the castle for the Czech nation, being the ancient home of the kings of Bohemia.)

What’s at stake in David’s work is, quite literally, more than just a semiological discourse via the medium of painting or sculpture; it encompasses an excess that goes beyond the logic of referentiality. This is characterized by the artist’s typical urge to fill what can’t be filled. He embraces all of the visual media, and while it is painting he most frequently turns to, he has also created a cycle of assemblages, made of all sorts of objects and toys as though they were extensions of the limbs of his body forming a spoof rocket (‘Raketa’, Rocket, 1990–9). Another example is Brutal abstraction (1993), starting with the work’s title, which captures the way in which David can’t help but infuse corporeal presence into abstraction; whether it’s in terms of a pictogram (three simple circular forms suggest the head of Mickey Mouse), or simply in terms of how washes of white colour are allowed to run down a good part of the canvas. In fact, it is the body and its manically disseminated imprints that are, ultimately, the only viable defence against dissolution in the unstructured soup of continually fleeing meaning that Postmodernism tried to describe. The question of the body, however, is precisely the issue only partially addressed by Postmodernism, a category under which David is often – perhaps too readily – listed.

In the exhibition, this odd collision between body and semiotic confusion was best exemplified by the artist’s photographic works, such as the 1998 project ‘My Hostages’, in which David got his own children to assume the poses of kidnapped and tortured victims. In the series ‘Hidden Image’ (1991–5), David photographs, vertically bisects, then doubles both halves of the faces of well-known figures from the fields of art, sport or politics, discovering a new person in each of them. ‘This scary spectrality, both strange and familiar, reveals the archaic and anachronistic monstrosity of purely intimate excess,’ wrote one of the sitters, Jacques Derrida, in response to the project. This ‘revealing of intimate excess’ is what we try to suppress in our everyday lives by keeping to standards and to fixed norms – not only because we feel threatened by the strange and the uncanny, but also simply because excess always has the potential to pull us into the abyss of madness or death.

Confronting this suppression is perhaps what best characterizes David’s art; it is also what lends his work its political dimension. His practice has been associated with the question of art’s political impact since 1984 when, at a time when the Social regime was still fully in power, he and Stanislav Diviš co-organized the first in a series of semi-legal exhibitions of young artists called ‘Confrontations’, which took place in private flats or in the countryside. Even then, however, David’s aim was not to provoke the establishment by pure presentation of artistic freedom in the form of neo-expressionist painting styles. His confrontational way of working has always had farther-reaching aims, although as ‘Preliminary Retrospective’ underscored brilliantly, these only became apparent in his later projects. The show also highlighted the fact that David’s unfolding of intimate excess provides a space that can, oddly enough, be shared. Today, this seems much more of an essentially political act than more media-friendly strategies of symbolic politics.