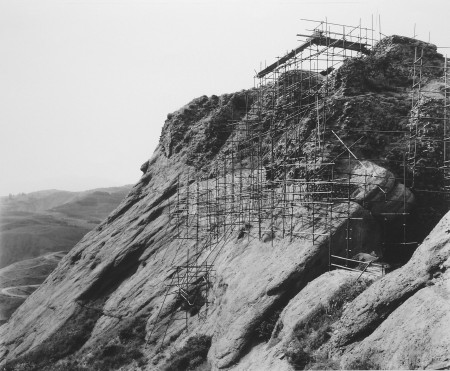 ‘Poison Protocols and Other Histories’, the title of Joachim Koester’s recent exhibition at Stills (a public gallery specializing in photography), refers to Walter Benjamin’s experiences of getting stoned, experiments – or ‘protocols’ – that the visionary essayist documented with scientific precision. Intended as the basis for an exceptional work on cannabis, these solemn accounts of giggling fits, paranoid episodes and attacks of the munchies are the imperfect records of daring voyages into the unknown – the book itself was never written.

The doomed heroism of such an enterprise is classic territory for many of the individuals who have inspired Koester’s work over the last five years. His cast of characters includes the occultist Aleister Crowley, opium-eater Thomas de Quincey, crazed cult leader Charles Manson and the poet and painter Henri Michaux (whose drawings made under the influence of mescaline become an animated psychedelic documentary in Koester’s My Frontier is an Endless Wall of Points, 2007). Call them outcasts, misfits or prophets, these figures are united by their yearning to penetrate what Benjamin called ‘the world of surfaces’, risking dissolution and death in order to transcend everyday experience. In contrast, Koester’s practice dwells on the surfaces, fixating on the details and materiality of place in order to examine the traces left behind by human ideas and actions.

The six groups of photographs shown at Stills depict realistic scenes with ostensible detachment. These silver gelatin prints emphasize light and shadow, recalling the ‘truth-telling’ characteristics of earlier documentary photography, from Depression-era records of the drought-ravaged Midwest to America’s suburban vernacular as shot by Ed Ruscha and Robert Smithson. In today’s high-colour digital age, their association with a near-obsolete technology brings into play notions of memory, nostalgia and loss, fetishizing what was once assumed to be neutral. All these works are absent of people but bear the subtle marks of activity, lending them an air of desolation. In the series ‘Barker Ranch’ (2006), the last hideout of the Manson Family in Death Valley sinks into a bleached terrain of wizened trees and dusty rocks. The pictures’ tonal gradations convey the beauty of the landscape but then qualify it with the knowledge of violence; the dwelling is ramshackle, with black holes where its windows and door should be. Koester’s series of portraits of home-grown cannabis plants (‘From the Secret Garden of Sleep’, 2008) show buds the size of fists dripping with resin, their serrated leaves rendered in such exquisite detail that they seem extraterrestrial. The artist’s text explains that these hybrid strains testify to a history of political debate and legislation concerning the domestic marijuana industry.

Koester’s films, meanwhile, focus on human protagonists. The choreographed convulsions of Tarantism (2007) are based on the alleged symptoms of the tarantula’s bite; movements which Koester asked each person to generate according to a different set of rules. With awkward spasmodic gestures the dancers convey the individualism at the heart of collective hysteria; each one is isolated, unfathomable, their bodies as enigmatic as they are expressive. Koester insists on context, hence the lengthy commentaries supplied as hand-outs to be read alongside each work. This interplay between textual and visual information does not make for escapist contemplation; instead the images ask to be read, to borrow another of Benjamin’s phrases, ‘like crime scenes’.

The dramatic ruins of Alamut Castle are the subject of Koester’s new commission for Stills, a series of photographs entitled ‘Time of the Assassins’ (2009). Perched on a lofty peak of the Elburz Mountains in the north of modern-day Iran, this site is presently undergoing excavation: a process of recovery and interpretation that has often been central to the artist’s own work. The story’s evolution is complex: during the 11th century the castle was occupied by the mysterious Hashshashins, a disputed term which may mean followers of Hassan (Hassan-I Sabbah, a Persian Nizari Ismaili missionary), ‘hashish eaters’ or ‘assassins’. It is said that these hired killers dwelt amongst the beautiful gardens and libraries of Alamut, perfecting their art while fortified with cannabis and opium. Centuries later this tale became the inspiration for Charles Baudelaire and Alexandre Dumas to form the Hashish Club (or Club des Hashischins) and it was later invoked by the Federal Bureau of Narcotics, which extended the Orientalist threat to encompass Mexicans and black people (the primary users of hashish in 1930s America). In documenting its history, Koester’s work itself becomes part of Alamut’s mythical past. Aesthetically, his images refer back to photography’s beginnings in scientific empiricism, appearing to offer a definitive record of the impregnable fortress captured as it now is, with spindly scaffolding rising up from the sheer cliff-face. But since these images are offered as one episode in a sequence of interpretation, the sense of visual veracity becomes uncertain. Gradually, and if you stare long enough, these monumental ruins start to seem uncanny, a reflection of Koester’s ‘ghost-hunting spaces’ (as he has described his own practice). Like the other works in ‘Poison Protocols and Other Histories’, they invite us not just to observe, but to see with the mind’s eye.