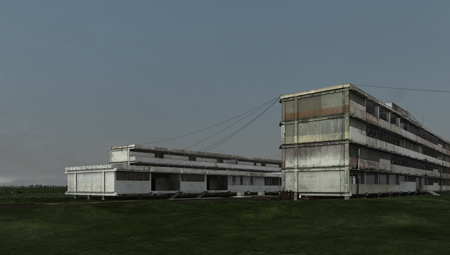 For his second solo exhibition at Simon Preston Gallery, John Gerrard presented his latest work, Cuban School (Community 5th of October) 2010 (2010). In this large-scale digital projection, Gerrard sets the scene around a derelict school on the outskirts of Havana that houses 75 children. The building is recreated in meticulous detail, capturing every rusty drainpipe and every discoloured slab of concrete. These composite images show little evidence of the people inhabiting the complex. Only the fictional caretaker, Mariebelle Leon, fulfils her daily duty by turning on the lights at dusk and off again at dawn, marking the passing of time, day by day, for the duration of the 365-day-long projection cycle of the work.

The building’s dim outlines loom in the fertile vegetation of the Cuban landscape; a relic of the franchise of the International Style, the edifice conjures up Cold War associations. Like a space station perched in an alien environment, the gloomy structures resemble the former outpost of a now petered out ideology. The dereliction is caused not by war but through dried-up resources, and is visible in the darkened, mossy and rust-stained concrete, the plywood-panelled windows and the cracked cement that reveals the supporting steel skeleton. The individual elements have acquired a patina that reconciles the edifice with the surrounding landscape.

True to his signature style, for this work Gerrard relies on excessive on-site photographs, topographical data and satellite images to create a virtual site visit. With the help of customized, real-time computer game software, the artist is able to animate a 3D model and create virtual footage of the location – indeed, the low horizons and simplified scenery evokes the coded panorama of the computer game. Gerrard’s works feature hog farms, oil drills and dust storms in rural North American settings, often drawing attention to the labour and ecological conditions in the aftermath of extreme industrialization; these virtual relics capture industries that are slowly draining the land and which will consequently be dying out within the near future. Composed in perpetual motion, Gerrard’s projections mirror the repetitive motions of the systems that they digitally represent, revealing their outdated and ecologically ignorant modes of production. Although generally characterized by the absence of people, in Cuban School and Oil Stick Work (Angelo Martinez, Richfield, Kansas) (2008) – the latter of which is currently on view at Canary Wharf as part of Transport for London’s ongoing ‘Art on the Underground’ project – Gerrard introduces individuals engaged in repetitive manual work, contrasting their efforts to the alienated virtual employment economy that now dictates the labour politics of the industrialized world. One begins to doubt that they will still exist by the time that Oil Stick Work concludes its 30-year projection cycle.

The lengthy time-frame of the works, although an impressive conceptual dimension, only adds a little to the necessarily shorter encounter with the work in the gallery. Instead of wandering the abandoned perimeter of the Modernist fortress in Cuban School, the sleek, circular zooming movement of the viewpoint makes it impossible to forget that what we are seeing is a programmed image – more a synthetic echo than a breathing document. Circling the same site over and over again it becomes apparent that this is what life in a computer game must be like, never quite convincing and a little monotonous. Gerrard’s work may be more interesting for future generations as records of a recent past than for us as low-res versions of a dystopian present.

Anna Gritz is a curator and writer based in London.