Every crowd manifests a language and an energy of its own. To be in a crowd is to feel both the power and powerlessness that comes from this promise; it’s to feel the contradiction of a body amongst bodies becoming both less than and more than itself. It’s almost impossible for an artwork to re-create this feeling without diluting its complexity. To merely represent a mass gathering is to rob it of its internal rhythms and conflicts, whatever they may be. If ‘the future belongs to crowds’, as Don DeLillo wrote in Mao II (1991), you could argue that the future has already arrived. But in Indonesian artist Jompet Kuswidananto’s recent installation, After Voices (all works 2016), he presents a different picture: a bodiless crowd not from the future but from the past. A crowd of ghosts.

In neat rows on the floor are shoes, mostly trainers: all worn, all different sizes. Hollow busts hang from the ceiling; some wear motorcycle helmets and float above handlebars and headlights. Others, covered with T-shirts fashioned into balaclavas, hover above motorized hands, which move arthritically back and forth, as if clapping. The sounds of chants, speeches and songs ring out. Automated drums, stacked in a pyramidal shape, begin to beat and then stop, abruptly. Flags with emblems and texts hang in the space and, when a fan suddenly switches on, it blows a large piece of fabric, revealing an image of a man – President Suharto of Indonesia – holding a gun. It’s not surprising to learn that Jompet trained as a musician, nor that he belongs to a collective and theatre group (Teater Garasi, based in the Indonesian city of Yogyakarta). 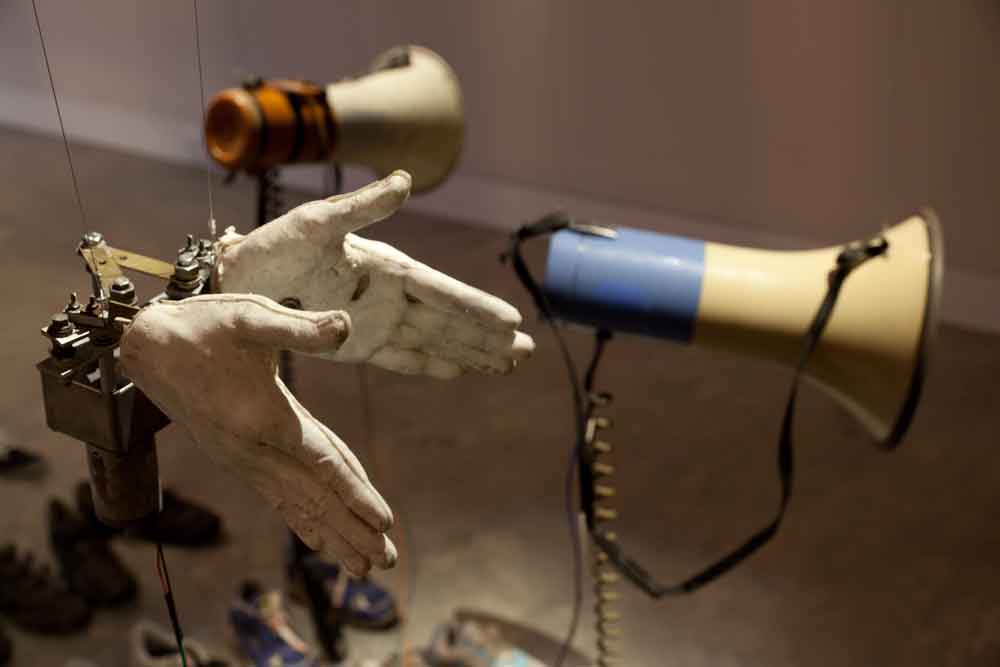 But, to what past do these fragments of people, belong? Two video works situate us within a turbulent history. One screen takes us back, in the form of a re-enactment, to 1 March 1949, when the National Indonesian Revolution launched an offensive against the Dutch in Yogyakarta. This battle became a symbolic victory for Indonesian independence and was used by the future second president of the Republic of Indonesia, Suharto, to legitimize his military credentials over a brutal 31-year reign (known as the ‘New Order’), which lasted from 1967 until his death in 1998. If there’s a problem with Jompet’s re-enactment it’s that there is no problem: it appears seamless, as though history is condemned to repeat itself not as tragedy or farce, but simply as cinema. The second video, Noda/Stains, is more elusive: it features a black and white surveillance-like video of a room with leaking walls and pools, like ink, on the floor. This visual metaphor might apply to any situation in which personal and collective traumas inevitably bleed out from political structures that continue to suppress, but here it is impossible not to think of Suharto’s anti-communist purges, specifically the more than 500,000 people murdered by the State between 1965–66, and the many more who were killed on either side of these dates. 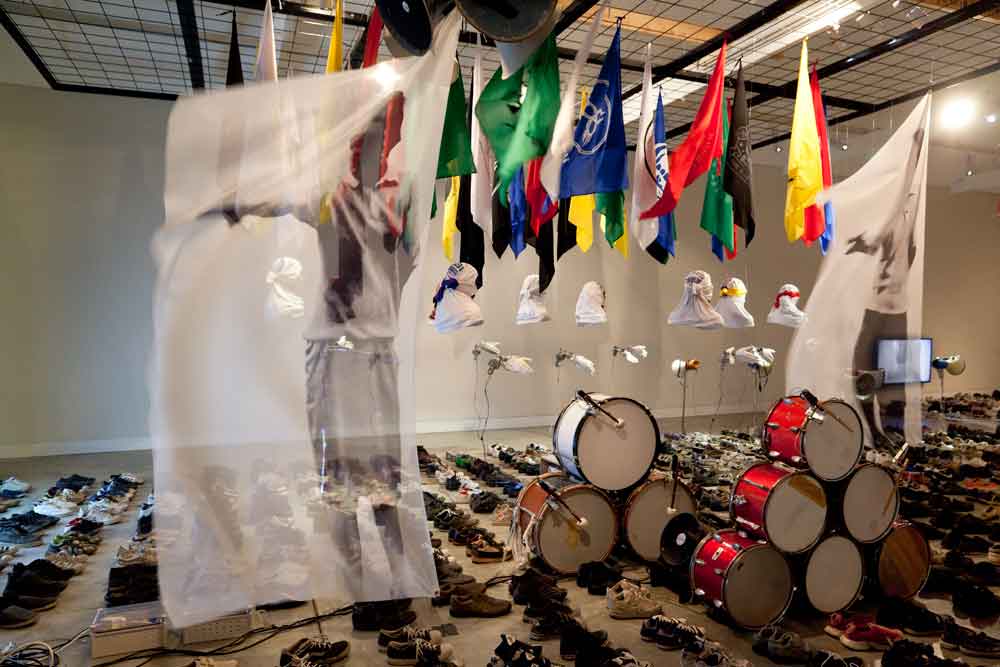 Although Jompet’s art is a focused engagement with Indonesia’s history of violence, After Voices seems to want to pry open the junction between the inheritance of trauma and the ‘post-1998 sonic blast of democracy’, as the artist (who was born in 1979), describes it. Obviously, it’s important not to simplify the messy history of Indonesian nationalism; political art that makes generalizations about the politics of the past for convenient gains in the present has a habit of repeating the same mistakes. The ghosts that make up this crowd compete to be seen after this ‘sonic blast’ but, in the fallout, the demands remain incomplete and divided. It would seem Jompet would rather acknowledge, quite rightly, that confusion is often the most coherent position available in a democracy, precisely because it accepts politics as inherently unfinished.