Dutch identity, driving across Europe in a plywood car, the charity of strangers 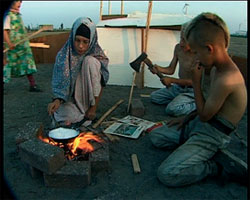 Early on in Joost Conijn’s film Wood Car (2002) there is a scene in which the artist is picnicking with three elderly women in a field, sharing plums which they have just gathered, their bread, fresh cheese and sausage, but not a common language – they are somewhere in rural Eastern Europe and Conijn is Dutch. Following lunch the women, who are dressed in patterned skirts over trousers and boots, help the artist to push his wood gas-powered, plywood-clad car, which he has driven from the Netherlands, just a little further so its trailer can be attached. ‘Excursi’, Conijn offers, but the women aren’t looking for an explanation.

Charity from complete strangers or new friends is typical of the interaction that Conijn and his home-made car inspire in this road movie documentary. In the summer of 2001 the eccentric-looking vehicle and the need for dry wood to run it acted as an elaborately disarming ruse for Conijn to encounter people while exploring the byways and relict forests of the Czech Republic, Slovakia, Hungary, Romania and beyond. With no apparent progressive narrative – we see no beginning or end to the journey – the film comprises a series of drive-bys and stop-offs (or breakdowns). Sawmill workers oblige with logs for fuel, villages turn out for a funeral procession and local men relish looking under the car’s smoking bonnet. An earlier though equally archaic venture, documented in Airplane (2000), saw Conijn design and build his own aircraft in the Netherlands before testing it in Morocco. Where this plan and the resultant film were directed towards the artist’s singular desire to fly, his automobile project is, funnily enough, less driven, and it’s all the more dynamic for it. At a remote stop in Wood Car a wrinkly, headscarfed woman beckons Conijn and his cameraperson buddy from the vehicle into her homestead and silently serves up dollops of yoghurt. The incongruity of her jacket, however, festooned with BMW logos, speaks too much. Conijn’s subsistence motoring adventure is both a marvellously impractical holiday and a gently psychedelic koan about Europe, the home-made and the corporate.

But it is also an adventure in sculpture. The handsome curves and goggle-eyed headlights of the plywood-panelled car make it look like a half-remembered Citroën DS or a build from a kid’s crayon drawing as it overtakes waving families in luggage-laden Ladas and giggling children in trailers full of apples. Whole hamlets come out to watch the fire being stoked. The eccentric stovepipe running the length of the vehicle from the firebox fixed on the back to the regular engine at the front is the masterstroke, a wonderfully inelegant structure that incarnates the car as a piece of mechanical sculpture while marrying form and function with cartoonish frankness. Like Andreas Slominski’s elaborate traps or Panamarenko’s flying machines, Conijn’s car is the kind of cranky sculpture that ought to emerge, to everyone’s astonishment, from under a tarpaulin in the shed of a recently deceased (and necessarily reclusive) villager.

Where Wood Car’s wood gas technology qualifies as an ‘alternative’ fuel, Conijn’s film Siddieqa, Firdaus, Abdallah, Soelayman, Moestafa, Hawwa and Dzoel-kifl (2004), also screened recently at the Joan Miró Foundation in Barcelona, approaches an ‘alternative’ lifestyle as if, being Dutch, the artist is knowingly confirming the country’s reputation for liberal democratic tolerance. However, in the wake of the murder of Pim Fortuyn and, more recently, the filmmaker Theo van Gogh, it’s the very treacherousness of the current terrain of Dutch identity precipitated by this proud decadence that provides the context. The names in the title are those of seven native Dutch children who squat in a wasteland near Amsterdam’s docks, their ill-fitting monikers and the hijab of the eldest teenager, Firdaus, and four-year-old Hawwa the only signs of their family’s Islamic faith. Conijn films these semi-feral kids as they explore the spoil heap, scrapyard and stagnant creek that are their territory, literally on the wrong side of the tracks. As blonde-Mohawk-haired Moestafa scavenges from a mouldering caravan, Soelayman fixes his bicycle or little Dzoel-kifl plays with sticky asphalt as he sits in a puddle, ethnicity, religion and authority might just float free of each other. Yet the conditions under which this atypical Islamic family is apparently able to find freedom without persecution involve absurd marginalization and often alarming, axe-wielding, effluent-wading peril for the plucky children. Here Conijn presents another downside-up, outside-in riddle in the interstices of Europe, not Wood Car’s one of locomotion and exploitation but the sustainability of cultural integration and mutual tolerance.