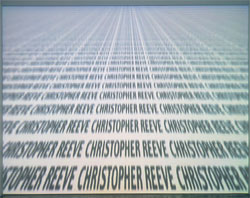 As the eponymous Bill muses in the final act of Kill Bill: Vol. 2 (2004), the Superman mythology is unique among comic-book lore. Whereas others have their greatness thrust upon them, this superhero was born with special powers; the invented alter-ego is not Superman, it’s the fallible Clark Kent who’s the invention. ‘What Kent wears – the glasses, the business suit – that’s the costume. That’s the costume Superman wears to blend in with us … And what are the characteristics of Clark Kent? He’s weak, unsure of himself ... he’s a coward. Clark Kent is Superman’s critique on the whole human race.’
Residing in a world of fiction, Bill’s Pop Nietzschean aphorisms are cute, but blind to a more profoundly destabilizing element of the myth: Superman actor Christopher Reeve. Yet made the year before Reeve’s death in October 2004, Jordan Wolfson’s Infinite Melancholy (2003) tempts similar home-baked philosophy. Projected at wall-filling size in a room of its own at the rear of the Kunsthalle’s concurrent John Armleder exhibition, Wolfson’s video first made its presence felt through its audio track, which suggested that, on opening the door, a local pupil would be seen diligently practising a piano. The aspiring pianist would have been making wobbly progress through the dainty phrases of Rogers and Hammerstein’s ‘Getting to Know You’, from The King and I (1951). Instead, the accompanying vision was of moving at speed over a receding white planar surface defined by rows and rows of identical black letters that spelt out, again and again, ‘CHRISTOPHER REEVE’. Immersed in this screen throughout the four-minute computer-generated animation, one would be flying dangerously low, skimming the second ‘H’, then wrenched upwards above a teeming fabric of now too distant, microfiche-like names. At moments the words flashed past at such a disconcertingly stroboscopic rate that the illusion of moving forward flipped into a sensation of being dragged backwards, as if on a swooping white-knuckle ride.
Is the struggling pianist (playing a musical number about encountering new experiences in a foreign land, no less) not the paralysed Reeve post-1995 riding accident, doggedly devoted to physical rehabilitation? Does the super-heroic flight over a horizonless plane not conjure up a shorthand for a mental journey, an escape to an alternative reality, whether a matrix or a dream? And are ecstatic lessons on the transcendence of mind, defiance in the face of adversity or the ‘real’ Superman (‘Christopher Reeve IS Superman!’) really what emerge as we speed over the relentlessly repeated name of the late ‘inspirational’ celebrity wheelchair-user? Wolfson’s brilliant, misleadingly simple-looking animation pays homage to the traditions of melodrama and memorial portraiture with a flatly respectful tone, yet nevertheless emits a kind of exhilarating, ironic brinkmanship. Infinite Melancholy is loaded with such cornball interpretative possibilities and such a deliciously portentous title that surely it should slide into bathos. Yet with each lullaby-like loop of the animation the frisson of a taboo on sentimentality or alternatively of pejorative cynicism becomes more and more mellowed, and the mesmerizing flight turns into something strangely comforting.
Dreaming of the Dream of the Dream (2004) was the second part of Wolfson’s exhibition, taking the place of Infinite Melancholy in the same space some weeks later. The artist purloined over 100 clips from animated cartoons depicting water – surging seas, babbling rivers, crashing waves, rainstorms and deep oceans – and spliced them together to make a 16mm film print. Though a silent one-minute loop the noise of the cantering projector provided its own soundtrack to the compilation, which, ordered from sunrise to sunset and devoid of life, seemed like an imagining of an alarmingly short Precambrian day. In contrast to the digital production of Infinite Melancholy, the animations that the artist used in this work spoke in a waning language of hand-drawn cell animation, lending added significance to the use of the ‘old-fashioned’ projector technology. What’s more, the work is intentionally doomed. It is an edition of one, and the artist has stipulated it cannot be duplicated, so the film will wear and fade, slowly killing itself.
Wolfson’s speculative, some might say Romantic-Conceptual approach, asks difficult questions about what we are willing to stake in beholding a work of art. What is an acceptable response – analytical and reticent or emotional and committed, or somewhere in between? And aren’t we now supposed to be bored with irony? In walking the bleeding edge between fiction (the Superman story or a sea-themed cartoon) and fact (such as Reeve’s death, or a spectral Indian Ocean Tsunami), the artist’s films prod what might be left of our withered celebrity-fixated, media-saturated emotional acuity to seek some kind of evidence for authenticity.

Article
Drawing lines in the air with metal