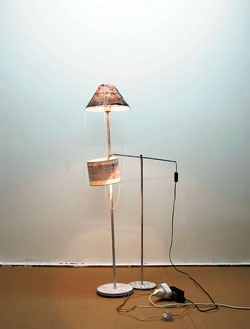 It was not unusual for the Galerie Meerrettich to be closed. Begun by Josef Strau at the end of 2002, the tiny glass pavilion housed in the former box office of an avant-garde theatre in Berlin was a lesson in ‘less is more’. A small space with no official funding, no press officer churning out beguiling catch-lines and virtually no consistent opening hours, the modest, artist-run affair was like a horseradish in the art world (literally, that’s how ‘meerrettich’ translates). The unsightly root doesn’t really fit in with other pretty waxed vegetables and it isn’t necessary for sustenance, but it does give life – or, say, a Bloody Mary – a bit of zing. And under Strau’s direction that’s just what the pavilion did: it was the venue for exhibitions, performances and installations that drew big crowds on opening nights and a cult-like following nearly every other day of the week, hosting some of the quirkiest and most engaging art events in Berlin until the whole project came to an end last December. While it lasted, the gallery’s retreat from conventional art-institutional availability despite an ‘everything’s on view’ transparency said much about its founder’s artistic practice in general.

It was Strau, after all, who wrote a catalogue essay for the 2006 exhibition ‘Make Your Own Life: Artists In & Out of Cologne’ celebrating what he termed the ‘non-productive attitude’, the kind of social recognition that artists could attain without having to produce ‘art works’ to show for themselves. For a time in the 1990s Cologne was the cradle of the non-productive, and Strau exemplified the attitude, managing to keep beneath the radar of anything like art-world stardom – even while his multifarious activities as artist, curator and author were making him extraordinarily influential on a whole generation of artists. I reckon that the radar still hasn’t fully registered Strau, at least in part because his art works – he does occasionally produce things – are so curiously discreet, demanding and ungainly that they aren’t the easiest items for collectors to snap up, or for press releases to encapsulate.

For years Strau has attached his own eclectic typewritten texts to standard lamps in a blurring of pedestal, podium and sculpture that is utterly distinctive in appearance. For a recent show the main space of dépendance was clustered with local flea-market finds – lamps with cocked shades, gangly stands and Frankenstein-like combinations of mechanical parts with a web of cords running along the floor. Small cut-out pages of text were clipped, glued, plasticized or otherwise attached erratically to the shades, with correction fluid covering some texts and emphasizing others. One senses that, for Strau, although the writerly form of the texts is important, the act of reading is equally so: the acrobatics that one has to engage in to slow down, lean, tilt or squint to read his poetry are a kind of a initiation ritual, as if entering into a club or a secret society.

This combination of lamps, like most of his others, was riddled with contradictions, for there was something at once awkward and elegant, preposterous and comprehensible, maddeningly nonsensical and matter-of-fact, about the whole thing. To look closely was to notice that Strau’s utterances have an air of quiet desperation about them. Their lines reminded me of Smiths’ songs, combining witty humour with a melancholy that feels, at moments, so profound that it can’t help but make you either laugh out loud or cry. ‘I have given you all so now I am nothing / When will you take off your clothes?’, read the opening lines of ‘C’ (2006), a poem that quotes heavily from Allen Ginsberg’s America and whose subject is none other than Strau’s former home town, Cologne. Framed on the walls were the texts in their entirety, so one could see that the lovelorn lines of ‘C’ set as poetry some of the same phrases first penned for an analytic essay about artistic practice and the role of Cologne in defining it.

To tell his illuminated stories Strau doesn’t do funny things with fonts or colours or kinds of paper. Every typed white page declares that this is not about pretty or even messy writing; it’s about the perplexity of language, and the way that two sentences repeated with slight differences between their contexts and grammar can convey either a biting analysis of a city or the lamentations of a jilted lover. Either way, his are not careless or unnecessary words. One senses that everything here needs to be said, and probably said twice, each time differently and with a good light to read by.