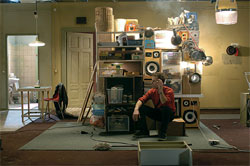 A multi-screen video installation can be an effective way of expressing simultaneity, duplicity and conjunction, yet the medium is generally viewed with a linear understanding of time and place. In his two video installations at Kunstwerke, however, Julian Rosefeldt has constructed much more complex notions in an imbroglio of time, causality, the mechanics of space and the psychology of multiplicity. It is difficult to describe The Soundmaker or Stunned Man (both 2004) elegantly, but perhaps language itself is a good analogy for their construction – each object and action is related to the other, spatially as well as temporally, and the whole is a system of elements that supports its own hermetic logic.
The Soundmaker comprises three screens: one showing the interior of a rather shabby flat (which, in the words of Martin Amis, looks as if it ‘stinks of Bach’), another the inside of a Foley artist’s studio, and the third a bird’s-eye view of the same. At the outset of the film we see that they are sets in a large film or television studio, with boom and camera operators bustling around. A man walks into the flat and potters about. Gradually a compulsion to straighten objects develops into an obsession: he pulls every piece of furniture into the centre of the room to build a large cuboid structure of tat. Meanwhile, in the Foley studio, his doppelgänger is surrounded by work-benches piled with objects not dissimilar to those in the bachelor pad – a sieve, coffee mugs and other indeterminate junk. He sits in a chair and grabs something, rattles it or slams it on the table, paddles his feet on floor – he seems to be making all the noises for the man dragging furniture around next door.
Eventually there is only one object left in the flat to incorporate into the stack: a mattress leaning up against a door. Puzzled, the man opens the door and finds himself in the Foley studio; the Foley double, meanwhile, has wandered off through another door, which leads to the flat. The two swap places and the Foley artist returns the furniture to its original, usable position while the obsessive man provides the sound-track.
The relationship between what is seen and what is heard is troubling – it seems absurd that such a distillation of noise production is possible, that a small block of wood can make the sound of a wardrobe. In fact, the ‘Theatre of the Absurd’, a term derived from Albert Camus’ Myth of Sisyphus (1942) – although its origins are rooted in the avant-garde experiments in art of the 1920s and 1930s – seems entirely applicable to such a purgatory, in which the inhabitant is synaesthetically off-register, his motivations obscure, and causality and scale muddled.
In Stunned Man two screens show the same domestic interior, one a mirror image of the other. The camera pans back and forth along the length of the flat as the action unfolds, shuttling from the hallway to the bathroom. One of the flats is wrecked by a stunt man jumping through walls, falling onto tables and wielding a broom, while in the other his double works at a computer, makes a snack, browses through some books. The crossover point between the two screens occurs when the occupant of the ruined flat dives through the bathroom mirror into the bathroom of the intact one. Meanwhile, the immaculate double walks through the front door of the trashed flat and proceeds to tidy and repair. But it is all much more complex than a simple transference between mirror images. A timeline would show that there is not a simple fold but a series of interleaved conjunctions. There are also tiny divergent details –
a bedroom is momentarily overrun by plants for one panning shot; the cover of a Luis Buñuel poster and a book, aptly titled Bluff, in one apartment are not mirrored in the other. Something fishy is going on at every level here.
After watching Stunned Man four or five times it is still impossible to figure out its structure. Another prominent book on the shelves – The Bisected Brain – signposts the trickery at play: the mental gymnastics involved in marrying the right and left, while negotiating the physical, intellectual and emotional contexts. Perhaps the man is stunned by his bamboozling world-in-a-flat, with its Sisyphus-like pattern of order collapsing into devastation and back again, yet the airless logic is as tight as a drum. Rosefeldt’s architectural training and involvement in alternative theatre must have informed the incredible production values and highly choreographed action, but although the cycles of narrative seem incontrovertible, they are never entirely closed. The psychological ambiguity, the oddness of the situation, resonates on and on.