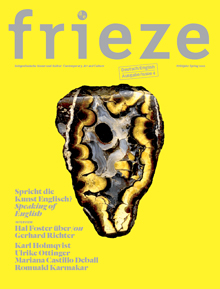 Several spoons of Bulgarian culture, and it tastes much better,’ says Kamen Stoyanov in his video cookery show Cultural Moussaka (2010) as he drizzles a portion of Kultura yogurt over a dish. As the Bulgarian artist goes step by step through the recipe, he compares making a sauce to preparing a canvas. Still, his video has less to do with the transmission of know-how than with a cultural system that seems bent on making things impossible: Bulgarian cultural politics.

The work was in the modest yet convincing exhibition aptly titled ‘Impossible Stories’, which was part of the Otto Mauer Prize Stoyanov won in 2011. The Vienna- and Sofia-based artist’s earlier works deploy humour as a stylistic device to address issues such as the political past of his native Bulgaria (Hallo Lenin, 2003) and art market conventions (Which one should I buy, 2008). ‘Impossible Stories’ also showed off his flair for the absurd and the ironic since the works describe not only the improbable but also the downright incredible. The absurdities of the internationalized art and culture industry led to Cultural Moussaka: To sponsor Stoyanov for the 2010 Aichi Triennale in Nagoya, the Bulgarian Embassy in Tokyo offered him not money, but a cook. Since Bulgaria likes to present itself as a culinary culture, the embassy’s chef was hired to work at the opening. When the chef was laid off as a result of cutbacks, Stoyanov took this incident of ‘cultural promotion’ as a starting point for his work. The other elements were two things the Japanese tend to associate with Bulgaria: yogurt (Japan’s best known brand is called ‘Bulgaria’) and Kotoo¯shu¯ Katsunori, a sumo wrestler of Bulgarian origin. Stoyanov made moussaka, which happens to be Kotoo¯shu¯’s favourite dish.

In other works, Stoyanov translates Bulgarian cultural policy into symbols that are clear and often perfidious but never trite. Exploring the prosaic and the overlooked, his videos lend visibility to cultural outsiders, like the street philosopher Seiji Inamine in Impossible Message (2010). The negligible meets the momentous in Bringing Kultura (2010), which documents another intervention. As the national cultural budget was being cut in 2010, a monument was erected in Sofia to honour the microbiologist Stamen Grigorov, who discovered lactobacillus bulgaricus yogurt in 1905; Stoyanov responded with his own cultural export and travelled to an exhibition in Maribor with a suitcase full of Kultura yoghurt, which he distributed to the locals. Fittingly, the show featured an empty Kultura pot (Untitled, 2011) to collect donations for the Ministry of Culture and the next Venice Biennale. This found object was Stoyanov’s answer to the scandalous financing of the last Bulgarian pavilion, which was financed by a private individual instead of the state. As culture gets privatized, does it taste better?
Translated by Jonathan Blower