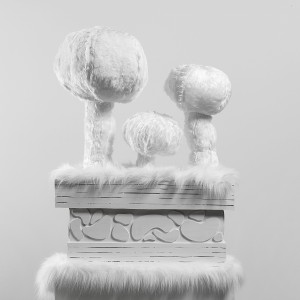 We are warned by Amanda Rowell, in the text that accompanied ‘Indoor Gardens’, the exhibition of Kathy Temin’s latest works, that here ‘the animal qualities show themselves. Minimalism is combined with sentimentalism.’ The show was indeed a strange, synthetic pleasure garden, a ‘cosy nook’ where Modernism slipped off its shoes and went walking on the grass – or, at least, shagpile carpet – a plastic paradise of fake fur and pebble-dash décor where the straitjacket of formalism was replaced by a flower in one's hair. Or so it would seem.

Temin has become widely acknowledged, both within Australia and beyond, for her critically rigorous yet materially awkward works, which are often interpreted as a post-feminist appropriation of various paradigms sited in Modernist art history. One of the most significant Australian artists of her generation, Temin has a DIY, almost drag, take on Kasimir Malevich, Frank Stella, Donald Judd, Claes Oldenberg and Marcel Duchamp, as well as on Ludwig Wittgenstein and Walter Benjamin, that is a powerful attack on the monumentalizing, heroic and often chauvinistic rhetoric of modern art past and a cautionary tale for the present. Often involving cheap, overtly man-made materials, her works have the appearance of something roughly cobbled together or misshapen, deliberately undercutting any idealism associated with the art object and positing instead something far more anxious and awkward.

This clumpy, drag slippage makes their Modernist credentials suspect, at best a flawed echo or cheap imitation. Such rough fashioning should not be confused with poor craftsmanship – Temin’s works are sturdy in the extreme, sometimes adopting a belt-and-braces approach in their lumpen making, where seams are over-sown and more than enough glue is used to bind things together. This unevenness seems to grow out of an excess of the homespun, a material oddness that quickly becomes familiar as a human, rather than superhuman, trait.
‘Indoor Gardens’ included the work Camouflage Cactus (2006), one of a trio of cactus forms displayed in a separate space from the main exhibition. Unlike the even green colouring of the other two, it was made up of military camouflage synthetic fur, its silhouette like a cartoon drawing of a cactus, with two stubby arms protruding on either side. Was this cactus overcompensating, borrowing the perceptual device (partially developed by Cubist artists) that imitates the appearance of nature, to represent itself as a natural form? Undeniably figurative, it quickly dissembled into pathos, and our heart went out to it.

Similar feelings were hard to avoid when the principal works were encountered, where camouflage was replaced by a sea of white fur – redolent of Meret Oppenheim or Mona Hatoum – in an incredibly seductive gesture that corrupted the Classical/Modernist ideal of white on white into a kind of hairy Suprematism. A huge white fluffy cube, White Cube: Fur Garden (2007), sat squatly off-centre in the gallery like one of Plato’s ideal forms gone feral, with a soft fuzzy landscape of trees behind. Cute and comforting, the toy-like objects were also conspicuously out of place and/or off-scale. The largest, human-sized, green-stuffed trees, Family Garden (2007), slumped under their own weight. Most disturbing was the mute impassivity of the forms, like a layer of foundation make-up without mascara and lipstick. This play on sensuous (if tacky) surface in contrast to subtly menacing form was found throughout the exhibition, perhaps most emphatically in Mantle Garden (2006–7), where the white-fur trimmed upper ‘mantle’ had as a counterpart a low-level, seemingly boarded-up, cat-flap or Kauffman-esque doorway leading to an unknowable but presumably abject internal space.

Details such as this doorway suggested that the objects were somehow inhabited or, at a larger scale, to be used in daily living. Suave yet kitsch, works such as Mantle Garden and Sideboard Garden (2006–7) were both Pop furniture and shrine-like sculpture, domestic space and rural idyll. Sideboard Garden especially spoke of a suburban, domestic attempt at an 18th-century landscape folly: Ludwig II of Bavaria meets British children’s television series Blue Peter. Like props from Goldfinger’s hideout in the 1964 James Bond film, Temin’s objects are flawed stand-ins for super-designed artefacts, heightened simulations of luxury commodities.

What characterized these works most significantly, however, was their relationship to nature and its anthropomorphism. This operated at various levels, from the direct imitation of tree shapes to the Scandinavian design-influenced ‘nature forms’ of decorative stucco pebble shapes, and most obviously in the titles. As Rowell suggests: ‘Abstract protuberances become soft cheeks, bosomy trees. Botanical soft furnishings.’ Temin makes a segue from the formalism of both Modernist and design practices to the form-less, haptic domain of the natural world, where sentiment – or animal feeling, as opposed to human intellect – guides her practice. This upturns the hierarchy of Modernist thinking while simultaneously borrowing its terms, co-opting our biological empathy with nature into a critique of didactic stylistics. Finally turning from the massive fur-clad central cube, I was suddenly facing the equally dramatic, sheer face of a sandstone cliff shrouded with fern, just a few metres outside the double-storey window of the gallery. Temin’s animal cunning had me cornered.