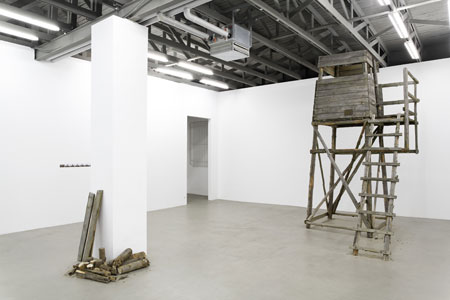 Three ostensibly unrelated things – the Mona Lisa, a rickety wooden look-out post and an old cast-iron safe – appear in Kirsten Pieroth’s recent untitled solo exhibition, which muses on art and value, displacement and transmutation. Over the last few years Pieroth has produced many witty Conceptual works, often materialized through a combination of photography and what could be described as sculptural evidence. She has been known to relocate dirty puddles, to convince the boss of a Danish furniture manufacturer to co-operate in the theft of the minute-hand from a landmark clock tower, and to conduct absurd historical research into the patentability of a (possibly fictitious) excuse given by Thomas Edison involving an upset stomach that prevented him from attending a function but not from working in his studio. Proceeding in a pseudo-scientific manner, her offbeat endeavours and experiments typically involve an intentional muddling of fact and fiction, the known and the obscure, documented and reconstructed truth.

In this recent exhibition a constellation of displaced objects, a paper trail and a series of photographic works constituted her three projects. The first room of the gallery contained two rows of images and a plain Perspex vitrine displaying correspondence and snapshots. The ensemble, Untitled (Loan) (all works 2007), signalled conceptual formality without any additional inflection – as though Pieroth had simply borrowed a ready-made frame. It also had the character of an investigation dossier, perhaps one relating to an art heist, given that the subject of the work was Leonardo da Vinci’s Mona Lisa (Portrait of Lisa Gherardini, wife of Francesco del Giocondo, 1503–6), whose popular fame was accelerated by the painting’s theft in 1911.

But rather impertinently, in a move that recalls Louise Lawler’s photographic analysis of the conditions of the display of art, Da Vinci’s painting only plays a supporting role in Pieroth’s work. Instead, the principal focus is on the Mona Lisa’s label, which hangs on the well-worn walls of the Louvre, to the right of the wooden railing encircling the masterpiece. Produced originally for a group exhibition at Tate Modern, ‘Learn to Read’ (2007), Pieroth’s work entailed organizing a loan of the wall label (valued at a meagre 25 euros) for the show’s duration. The vitrine contained the contract and correspondence between the institutions regarding the label’s temporary consignment. A series of commissioned photographs show a curator from the Louvre, in blue plastic gloves, removing the label while the Mona Lisa, denuded of an element of her institutional armature, naturally continues to smile enigmatically. Apparently, the label was immediately replaced with a substitute. Even though the arrangement was that the original label would be reinstated, when you’re next at the Louvre, pause to consider the possibility that you are looking at the replacement produced as a consequence of Pieroth’s intervention.

Some of the issues raised by this work – the intrinsic value of objects, their security and the fear of their loss – are contiguous with those in another piece in the exhibition, Untitled (Safe). This beguiling work comprises a waist-high, remodelled black safe that Pieroth has converted into a small wood-fuelled oven to warm the gallery. Opposite, a DVD loop displayed on a flat-screen monitor shows the stove’s chimney, on the gallery’s exterior façade, puffing happily away. But this is no live event being captured by a surveillance camera; rather, the footage was shot directly after the stove’s installation, generating an effective slippage between cause and effect across an ever-expanding duration of time. The white smoke also raises questions as to what is being burnt – surplus invitation cards, press releases, artists’ files, compromising records, abandoned ideas, maybe even money – and what the resulting smoke signals might mean.

One of the qualities that makes Pieroth’s practice stand out among other contemporary artists operating in a post-Conceptual vein is that her works feel neither like knowing, arty one-liners, nor like she has adopted the Conceptual mode as shorthand for a critical stance. Rather, conceptually and materially, they condense like surprising and precise metaphors. Invention is valued over production, yet her objects and images are convincing because of their offbeat particularity and savvy decontextualization. Take, for instance, the third work in the exhibition, Untitled, a huntsman’s hide-out which the artist came across in the countryside, had dismantled and transported to be reinstalled in the gallery, knowing all along that it would be too tall to fit. The corrugated cement roof was left off and placed like a Minimalist sculpture against a wall, while a pile of sawn-off ends from the structure’s supporting posts lay nearby. More snapshots documenting the stages of deconstruction hung alongside, like frames of a film that could also be played backwards if viewed right to left. In a gallery context the structure, originally designed for stalking deer, begged the question: who are the hunters and who or what is fair game?