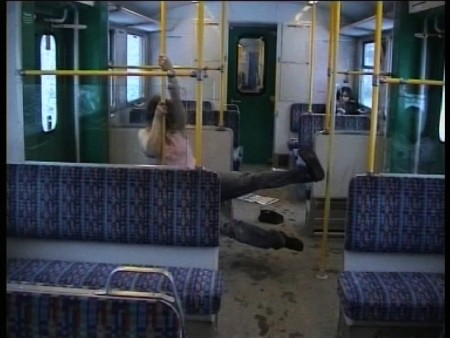 For Elda för kråkorna (Heating for Crows, 2008) the young Swedish artist Klara Lidén did little more than shrink half of Reena Spaulings’ dilapidated Lower East Side space down to a tight, blank-walled corridor that led to a tiny room furnished with a sofa. Once seated, eyes accustomed to the dim lighting, the viewer became aware of the faint sound of scratching, uncomfortably close. The walled-off space had been given over to local pigeons, which scrabbled for food in the area surrounding the darkened alcove. As though designed with the express intention of slyly tripping up close readers of Brian O’Doherty, Elda för kråkorna made the white cube seem uncomfortably permeable, the viewer all too aware of the big, dirty city that lay beyond the gallery walls.

Over the past five years Lidén had made a number of improvised constructions and videoed performances that offer basic propositions for ways of living, all of which run sharply counter to the norm. These have included renovating a bunker-like space on the banks of the Spree in Berlin, where she is based, and offering it to whoever cared to stay, setting up an underground postal service that operated briefly in Stockholm, and pasting blank paper over advertising hoardings in Copenhagen. Recalling what Guy Debord famously called ‘anarchic urbanism’, Lidén’s feral actions, although robust, languish towards the bottom of the city’s food chain, supported by the DIY practicality of squat-living.

‘Heating for crows’ is a common Swedish expression implying a waste of energy, and the architectural interventions that Lidén has made (with zero construction costs) for gallery shows are economically built from scavenged resources. For her first solo exhibition at Reena Spaulings in New York, Lidén constructed a loft space from discarded cardboard boxes and piping (Benign, 2004), while in Do Not Cross the Line Blues (2006) a bunk was fashioned from police barriers and woven fabric. In both of these cramped, elevated refuges Lidén cut short any participatory reverie by showing documentation of the gritty surrounding area where the materials were sourced.

Lidén’s spiky videos, few of which run to more than four minutes, are all attuned to how routines can be performed and disrupted. Although in Ohyra (2007) Lidén actually beats herself up for not being able to perform standard domestic tasks (‘Scheisse, I’m so fucking bad at washing dishes’, she shouts), these performances are tightly managed exercises in taking account of one’s own actions rather than losing control. In Bodies of Society (2006) Lidén paces back and forth across a small bare room in her Stockholm apartment, a bicycle propped at one end. She seems at ease, despite holding a long metal rod. Lidén taps the bike provocatively, as though to test how it sounds – perhaps, even, to check what it is. As the vocal on the woozy backing track comes in – ‘I don’t want to talk about it / I don’t wanna talk about it’, delivered with the ennui of a 1990s’ slacker rock dirge – she begins to club the bike methodically to pieces, while remaining all the time eerily calm.

As with Unheimlich Maneuver (2007), for which Lidén – echoing Lucas Samaras’ 1963 exhibition at the Pace Gallery in New York – moved the contents of her apartment into Stockholm’s Moderna Museet, these videos are equally entranced and disgusted with the sheer quantity of stuff that anyone can accumulate. In 550 Jamaica Avenue (2004) the camera roams around an abandoned Brooklyn apartment that Lidén discovered upstairs from her own while staying in New York. She is glimpsed through a doorway, lodged between mounds of trinkets and old photographs, doggedly pedalling on a rattling exercise bike. Later, seated at a piano, Lidén plays a solemn and artless elegy – perhaps for whoever once lived in the apartment – in which the screamed finale sounds something like: ‘Ich brauche mein space’ (‘I need my space’). Like Bruce Nauman in his video Violin Tuned D.E.A.D (1968), Lidén – topless and asexual – turns away from the camera for the duration of the performance. In other videos she is roughly or else androgynously dressed, this sustained ambiguity skipping the more programmatic demonstrations of femininity’s performativity, never insisting on the importance of sexual difference.

Her much-admired video Paralysed (2003) is accompanied by a garbled song of the same name from 1968 by The Legendary Stardust Cowboy, an unhinged Texan now remembered, if at all, for providing David Bowie with half of his Ziggy Stardust moniker. On a sparsely filled Stockholm commuter train Lidén dances, earnestly and ineptly, up and down the carriage, quickly shedding a hooded military jacket and jeans to reveal a pink slip and shorts. She rolls on the floor, flips clumsily over seats and pirouettes with the enthusiasm of a child at a party. The impassioned performance quickly tests what happens when the unspoken rules of public behaviour are ignored, and the answer is – depressingly or enlighteningly – nothing. While so much recent politicized art favours defensive reticence over actual engagement, Lidén’s small but fiercely intense gestures retain a stranglehold on individual agency.