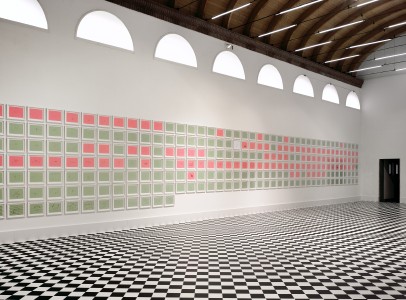 The Vassivière art centre, designed by Aldo Rossi and Xavier Fabre, comprising a conical lighthouse and horizontal hangar situated on an island in an artificial lake in the middle of nowhere, seems so improbable that visiting it doesn’t feel like being in the countryside at all; it’s like entering another, peculiarly displaced world. Koo Jeong-A’s splendid exhibition ‘Oussseux’ is at one with that world. ‘Oussseux’ means having the quality of being 'ousss', a word the artist invented some time ago, and which she recently inserted into a pink and green bound Flamariousss dictionary (a play on the Flammarion dictionary publishers). A flick through its pages reveals that the neologism is defined solely by its usage: ‘the future will be ousss’, ‘the land of ousss’, etc. It is a word we are invited to adopt and invest with our own private meanings, but which is strongly identified with the artist, whose personality and interventions are frequently described as elusive and enigmatic.

Koo’s work is itinerant and transient rather than traditionally site-specific. She marks the territory she passes through by leaving traces, like proverbial crumbs in a fairy-tale forest, and by altering the environment through changes in temperature, lighting, sound and scent. In this exhibition the visually striking flanks the easy-to-overlook. New black and white chequerboard linoleum flooring runs diagonally across the ground floor of the main gallery. Three hundred white-framed, concise ink drawings on green and pink paper almost cover one wall while the opposite wall remains blank, knocking the room’s symmetry off-kilter. Natural light from the high windows is diffused through hand-cut shades of translucent white paper, while white fluorescent tubes hung on rails further brighten the space, lending it a crystalline air. There is no obvious autobiographical thread to the drawings, but dogs, birds, snowmen and the artistís stand-in, a figure with a short crop of hair (and sometimes just the hair), reappear throughout. In one work a smiling circle nestled in a mountain niche is saluted by a figure doing a handstand: an image of sheer joy. Another work shows a table adorned with cold and hot drinks, no two cups alike. The connections between things in the drawings, rather than the depicted things themselves, are what catch the eye here.

Upstairs the fat, wet snoring of an animal rumbles from speakers hidden in the ledges above the stairwells, on which bunches of llama and dog hair and hillocks of dust are gathered. A paintbrush, a box of laundry soap (promising to ‘refresh your senses’), a floor mirror, a halogen lamp and other chosen items are interspersed around the room. Objects are placed on window-sills: a well-handled blob of coloured Plasticine; a stained coffee cup set on a single square of toilet paper next to a toilet roll and a blade balancing on its edge; a menagerie of silver farm animals and fantasy figurines. A row of these is tucked in the rafters and reflected in the mirror. There is something so deliberate, and intimate, about this collection of things and its peculiar arrangement that you have the distinct, and not disagreeable, feeling that you are snooping. Yet, no matter how closely you look, so much escapes you.

The atmosphere shifts as you step outside to cross the raised exterior footbridge into the adjoining theatre space, where Koo has built a wall with a peephole. Behind that wall is another arrangement of bits and pieces, but the peephole is designed to guide the gaze beyond the objects and out through an open window into the landscape. Just below, on ground level, she has enclosed the columned passageway with thin sheets of plastic and silver insulation. Two squat space heaters stand on breeze blocks, like Wild West gunmen in a face-off, their warmth trapped in this transparent cocoon.

In the main building the reserve that characterizes Koo’s work draws you in or envelops you while paradoxically keeping you at a distance. Yet her unexpectedly dazzling intervention in the dark, empty lighthouse proves that there is nothing aloof about her relationship to her viewers. A massive iron chandelier containing almost 800 thick, glowing candles hovers just feet off the floor. Specially made, the candles give off the odour of wood smoke and mushrooms. The air is thick with soot; occasionally the sound of large quantities of liquid wax spilling from the candles to accumulate on the floor breaks the silence. In the shadows the curved staircase leading up to the viewing platform takes on the guise of a beastly spine, and from the top the candelabra looks like a floating snowflake or chrysanthemum. Nothing lasts, so stay awhile, it seemed to say. If ever a work of art felt to me like a gift, this was it.