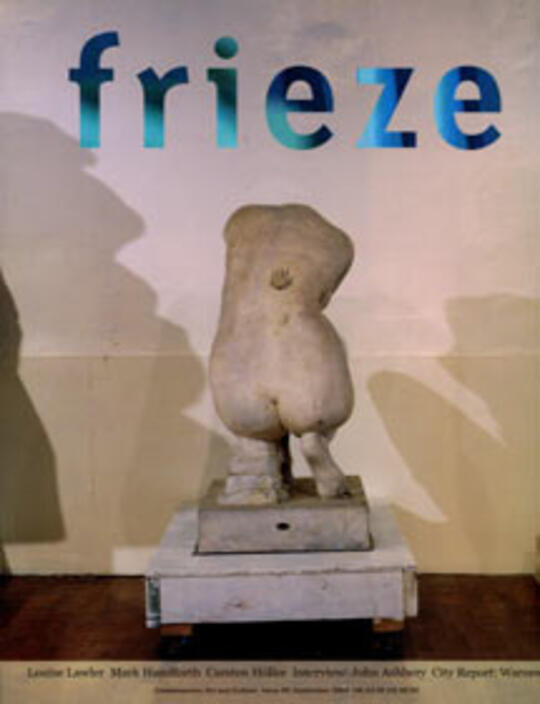 In a 1998 photograph titled Tasha’s Third Film a young blonde woman, hair in curlers and face made up, perches on a corduroy sofa and looks towards the camera. She is flanked by two men whose mouths hang open as they nap. This must be Tasha, and the shooting of her third porn flick has either just wrapped or is about to begin. In either case the moment depicted by photographer Larry Sultan is outside the frame of the movie camera. In fact, beyond the sliding glass doors behind Tasha another scene is being filmed. In it a pile of naked figures, body parts, really – a thigh here, an indecipherable limb there – engage in some obscure sex act while the cameraman and crew gaze on. But for us, viewers of Sultan’s photograph, attempting to make out this more titillating scene requires that we look over Tasha’s shoulder and, by virtue of the photograph’s composition, be watched by her. Notably, her look is neither that of desperation nor of victimization (as pornography’s critics might claim). Nor is it hopeful and fresh, the face of someone new to the job. Tasha’s gaze is distant, perhaps even bored. It is a perfect foil to the frenzied, full-frontal immediacy that porn was designed to promise – a promise that Sultan’s photographs repeatedly withhold: extreme vacancy in lieu of extreme sex.

Tasha’s Third Film is one of more than 60 large-scale colour photographs in Sultan’s recently completed series ‘The Valley’. Begun in 1998, the series takes its name from Southern California’s San Fernando Valley, a 260-square-mile expanse of middle-class suburban sprawl universally mocked for its big malls, bad hair and ‘like, totally’ overused gum-snapping expressions. In the past ten years the Valley has also become the economic capital of the adult film industry, which rents out local residences for film shoots. In this way the Valley’s peculiar brand of social and class aspiration, as revealed by its domestic décor, finds its way into the cultural landscape of porn. As Sultan notes, details such as ‘dark wood panelling, overbearing stonework, marble counters’ are intended to ‘give the appearance of “the good life”, of wealth and taste’. The Valley is, after all, a wannabe Hollywood, stigmatized as ‘the other’ to the Westside of Los Angeles, where more highly esteemed filmmakers make ‘real’ movies.While Sultan’s photos take the adult film industry as their point of departure, his eye is not that of the pornographer.

‘Home’ is a familiar trope for Sultan, one that he examined in his acclaimed book Pictures from Home (1992). In The Valley home (both one’s real-life domicile and as a porn setting) is always both fictional and factual, decorated with aspirations for a better life and at the same time bogged down by the realities of day-to-day existence. Consider the photo Reseda (2000), in which a woman, fully clad in red and black latex, sits meditatively, sunken too deeply within her chair. Behind her a print from Charlotte Salomon’s monumental autobiographical artwork Leben? oder Theater? (Life? or Theatre?, 1940–42) makes the point clear: home is always a place of both life and theatre, and drawing a line between the two is an impossible task – perhaps all the more so in the Valley, where Sultan grew up (any one of these homes could have been his own). The Valley is made of the kind of sentimental dreams embodied by the embracing Parisian couple in Robert Doisneau’s mass-produced photo Kiss by the Hôtel de Ville (1950). What, then, could be better than the sweaty stomach of a rising porn star caught between takes in Encino to give the lie to that fantasy? Doisneau’s scene, too, must have been staged.