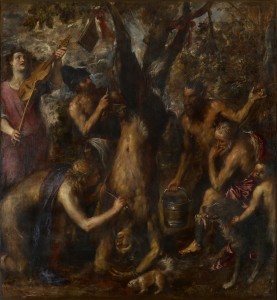 Tiziano Vecellio (Titian) was the first artist to be given a noble title, a fact that seems only apposite for a man whose customers were the monarchs of Europe, whose network of agents spanned the entire continent, and whose friend, the writer Pietro Aretino penned texts specially tailored to accompany his major works. While the exact date of Titian’s birth remains a matter for speculation, most historians agree that it was probably around 1485, since his first documented works date from 1510. Although references to him being a ‘centenarian’ at the time of his death in 1576 are probably exaggerated, there is no doubt that he enjoyed an exceptionally lengthy and successful career.

Titian’s legacy consequently includes a substantial body of late work, and it is the art of this period that formed the subject of the exhibition ‘Late Titian and The Sensuality of Painting’ at the Kunsthistorisches Museum, expertly curated in collaboration with the Gallerie dell’Accademia, Venice, where it opened in February 2008. Loans from around the world supplement works from the Kunsthistorisches museum’s own collection, which boasts a veritable treasure trove of Venetian painting. The show’s subtitle emphasized that it is certainly impossible to deny Titian’s ability to fulfil, and regularly to surpass, the viewer’s expectations and desires in his canvases. For contemporary audiences, whose visual tastes are partly informed by the Impressionist and Expressionist vocabulary that has influenced painting since the late 19th-century, Titian’s late works hold a particularly strong appeal.

In the last two decades of his prolific career the painter steered his technique in the direction of what Giorgio Vasari termed ‘pittura a macchie’ (patchy painting). Even if age-related debilitations in motor function or eyesight affected his work, this variation in his style still comes across as a deliberate choice: perhaps prompted by the fact that, over the years, many artists had imitated his style and he was keen to develop a new, unique technique in terms of coloration and brushwork. Accordingly, Titian re-appropriated long-serving themes and subjects – portraits, depictions of saints and, time and again, nudes – on which to practise and develop his painterly individuality.

Titian’s prodigious output was made possible by adopting a veritable ‘production-line’ app-roach to his work. To meet exorbitant demand, successful paintings were simply replicated, with compositional patterns reused from one work to the next, physiognomies recycled and gestures borrowed. Titian’s gallery of beauties, represented here by three portraits of women (Woman in a Fur Coat, c.1536–8, La Bella, 1536 and Portrait of a Young Woman, c.1536), conjugates the possibilities of identity and alterity in exemplary form: a pose is borrowed but the clothing changed; a face is repeated, but it looks the other way. Such procedures of variance and repetition seem quite modern, if one reads them not only in narrow mercantile terms but also as strategies of seriality and self-quotation. One thing that varied considerably in Titian’s work was the degree of his direct involvement. Contracts were drawn up stipulating what proportion of a painting was to be executed by him, generally focusing on the incarnation of faces and hands. Titian’s work was created according to fixed hierarchies; the mechanisms of today’s market are certainly different in this respect.

One of the show’s key exhibits was The Flaying of Marsyas (1575–6), currently owned by the Archbishopric of Olomouc in the Czech Republic, and usually on display at the State Museum in Kromeríz. In this work Titian visualized a rather unusual story, the mythological tale of a quarrel between the Greek god Apollo and the satyr Marsyas over which of them is the more talented musician. They organize a contest, judged by the legendary King Midas. As is to be expected, Apollo wins and is allowed to have his sadistic way with Marsyas.

The work provides a perfect example of the way in which our interpretation of images alters over time. To the modern viewer it is far from clear which of the figures portrayed is meant to be Apollo: the musician to the left of the composition or the kneeling man with the laurel wreath apparently delighting in carving up the unfortunate satyr dangling by his ankles? In Titian’s era, when culture was equated with the Apollonian values of truth and beauty, there would have been no doubt that the dreamy violinist represented the god of light and the arts. Yet our present-day inclination to assume that every cultural document – to put it polemically – also testifies to a barbaric reality leads us to surmise it is the butcher indulging his basest drives. Titian gave his own features to the portrait of Midas. While the others carry out their appalling task, he sits close by and contemplates the scene. At his age, he seems to imply, he is left with no other choice.