Successful artists often reach a point, sometime in their 40s, when they are faced with a choice between propagating gestures they are known for, or risking new ones which could pitch them beyond the safe ground of their reputations. Judging from the series that dominated her first solo museum show in Germany, Laura Owens certainly has time on her mind. ‘Untitled’ comprises 80 paintings (2010­–11), each 61x61 centimetres, which, despite their square formats, take analogue clock faces as their template. Many incorporate motorized clock hands, ludicrously dysfunctional, whirring at various speeds amidst fields of painterly incident that seem bent on obscuring them. The paintings flirt with this temporal conceit, sometimes ignoring it entirely, as they skip through styles: decor kitsch, Picasso-esque portraiture, AbEx splashes, geometric formalism. Equally diverse materially, they exploit variations between coarse jute and fine primed linen, or between appliquéd fabric and strings of oil applied with a cake decorator.

The modular hang of the series – two rows of ten paintings on each of the four walls – in conjunction with its heterogeneity, as though each canvas were an occasion to pitch a new idiom, is a strategy particularly associated with Postmodernist painting of the late 1990s. This breeding ground of quotation and reference was also Owens’s, but until now she has not schematized the range of her borrowings so explicitly. The stylistic spectrum suggests a reflection on the phenomenon of painterly sampling from the critical remove of hindsight. If it seems paradoxical for Owens to take stock of her own historical development as a painter using a second-hand format designed to present artistic identity as inherently fragmented, it should be remembered that she has always interpreted the notion of an artistic self as an unstable construct of assumed guises. 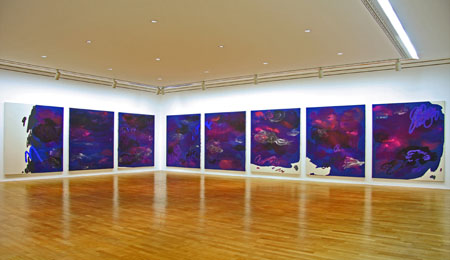 The accretion of paint is a process that occurs over a span of time, making every painting a temporal cross-section, and thus making the theme of Owens’s untitled series a meditation on its own medium. This self-reflexivity comprehends a present tense – that of Owens’s painterly rhetoric – in relation to a past: the vertiginous art-historical context out of which she picks and mixes. Her authority can be gauged by the extent to which she convinces us that painterly role-playing is an unavoidable consequence of a contemporary engagement with an atomized painting tradition, rather than an opportunistic travesty of the unknowability of history. Is relativism a refuge in irony from the risk of laying claim to one’s own identity? Owens has always combated this charge by keeping her process as shamelessly hands-on as possible, even if the vivacious application conceals untold depths of preparation. She carries off her quotes with such disarming light-heartedness, it seems churlish to take her to task for presumption. A series of Owens’s artist books (Set A, B & C, 2011) laid out for perusal on a trestle table, exposes her sampling as collage-based, rooted in the protracted trial and error of gestural improvisation. Quotation overwrites, modifying as it assimilates. Four hundred years separate the 17th-century designs collected in a book of English Jacobean embroidery from Owens’s breezy gouache interventions, but the brio of her mark-making denies that the chasm can’t be bridged.

In each of four larger paintings, an expanse of raw linen is qualified by marks that retain their autonomy as elements of a graphic art vocabulary, even as they combine to picture a wave, or the voluptuous curves of a beckoning nymph. These devices, through habituation, now register – problematically – as signatures, despite having been devised as impersonal quotes of pre-existing painterly ciphers. Untitled (2008), the oldest painting in a show that consisted almost entirely of work made over the past couple of years, is a 3.5-metre-wide DayGlo magenta field punctuated by fatty dabs of impastoed oil. Originally pitched as recollections of what expressionistic brushstrokes once meant, these gestures are now stock elements in Owens’s established repertory. Having been objectified and thereby purged of their inherited clichés, they have gone on to acquire a new burden of familiarity as pieces of trademarked Owens.

The exhibition’s final room – an installation of nine 2.5-metre-high canvases (‘Untitled’, 2011) – suggests a rearguard attempt to collapse the semiotic echo behind every mark Owens makes. Over creamy cotton duck, she laid an indigo wash that petered out before the canvas edge and missed the bare canvas on the far left altogether. Broad swathes of glittering mica flare out of the darkness like exotic fish rising from underwater depths. Despite the cinematic panorama of the nearly abutting canvases, and the illusionistic blue of their backdrops, these paintings are unusually non-signifying. The lack of ostensible reference constitutes, for Owens, a reaching into unfamiliar territory. If a particularly effete stain recalls Helen Frankenthaler, or there is a hint of Robert Motherwell’s chiaroscuro in a wedge of bare cotton exposed by the Prussian blue ground, it seems incidental and inevitable.

But here, where Owens is most unsupported by reference, the bones of her technique come through most blatantly. The series resembles a technically inventive but ultimately clunky enlargement, in paint on canvas, of an abstract Photoshop design. Scribbles of impasto are ghosted by an underlying trace, designating spontaneity as a laboriously constructed simulacrum. As Owens reaches to pull the ground out from under herself, her gesture registers as theatrical rather than unselfconscious. Divested of the explicit references on which it was honed – and which usually inhabit it – her technique proves to have become formed in the image of its received material, down to the delay of premeditation that shadows even the blithest passages. It seems the trace cannot be liberated from the memory of an origin, even when the origin has been wilfully expunged.