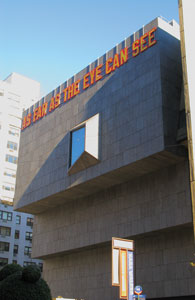 The story of Lawrence Weiner’s artistic career begins with a catchy origin myth – a perfect lightbulb-above-the-head moment. In 1968 Weiner, already thinking critically about objecthood, was in a show with Carl Andre and Robert Barry at Windham College in Vermont. His contribution was a grid of stakes, connected with twine, spreading across a grassy patch in the centre of the campus. Apparently students were not too fond of the piece – according to one version of the story, it got in the way of football games – and they vandalized it, cutting the twine and reclaiming the space. Weiner’s reaction was to decide that the destruction didn’t matter – that matter didn’t matter: the idea behind the work was the work itself. In language his piece remained in its ideal state, unharmed.

This incident is retold in many accounts of the artist’s work; clearly it’s meant to have some allegorical value. Weiner’s Conceptual turn was the kind of idea a lot of artists had back then, but the details of how it came about seem in this case rather distinctive: not just an (anti-) aesthetic decision but a strategy and an ethics. The lesson learnt and proposed: don’t try to argue with the football players. This has remained Weiner’s party line in the decades since, an unshakeably consistent view about how art should exist in and interact with the world. His works never speak in the imperative; as his Declaration of Intent (1969) puts it: ‘The decision as to condition rests with the receiver upon the occasion of receivership.’

The Windham College story resurfaced in the brochure for the Whitney’s Weiner exhibition ‘AS FAR AS THE EYE CAN SEE’ – produced in conjunction with the Museum of Contemporary Art, Los Angeles, this is the artist’s first major retrospective in the USA. As such, this particular ‘occasion of receivership’ is most definitely an occasion: a well-deserved, long-overdue and very public statement of Weiner’s importance. The discourse around it often proposed his activity as somehow exemplary. More specifically, in the context of a money-swollen, object-besotted art market Weiner’s dematerialized work currently reads as an ethically charged alternative model. A glowing Roberta Smith review in The New York Times called the Whitney show a ‘respite, wake-up call, and purification rite all in one’.

This talk of ‘purification’ may suggest a kind of austerity, a clarity of purpose. Yet on the level of affect something more ambiguous was going on. Certainly it could be said that the show was pure Weiner – the only voice heard was his. Didactic wall labels were (thankfully) absent; even the audio tour featured nothing but recordings of Weiner’s (very entertaining) songs. At that same time the visual impact of the mostly text-based show was anything but austere and restrained. Overcrowded and non-chronological, it stressed the consistency and adaptability of Weiner’s project and the graphic sophistication of his Constructivist-inspired design sense. Taken as a whole, the exhibition created an appealing, jazzy, visual buzz, but it was too easy for the content of individual pieces to get lost in the commotion.

Which is a shame, given how intellectually provocative, how funny and sexy and lyrical, how simply lovely, Weiner’s oblique texts can be. They skirt a line between description and metaphor, never taking up residence in either camp. (As a prose stylist, Weiner’s forebears might include both Walt Whitman and Ludwig Wittgenstein.) Taking the works on their own terms, it’s clear why the artist rejects and derides the ‘Conceptual’ label. In many ways his concerns are strikingly traditional. His pieces are almost always about movements and alterations, about bodies and materials. They talk about stone, earth, dust and ash – and, over and over, about water and the sea. (The argument could be made that Weiner is the most powerful and original maritime artist since Turner.)

Yet this aspect of Weiner’s work – quiet, romantic, idiosyncratic – may be hopelessly at odds with the attempt to proclaim his significance to a larger audience. The insoluble problem is that a major museum exhibition is always, on some level, an attempt to argue with the football players. So how do you make a case for an artist whose entire practice is built around refusing to make a case? Weiner himself certainly seems to be aware of this issue. On a preparatory drawing for the retrospective is the pencilled comment: ‘Flogging a horse that has given its all only leads to diminished accomplishment and reduces the work to a theorem rather than a theory.’