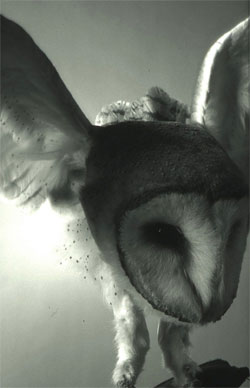 There are four prefaces to the catalogue to ‘Le Voyage Intérieur’, each one penned by a representative of a sponsoring institution or partner. Reading these tedious texts after visiting the exhibition, I became convinced that the curators – le britannique Alex Farquharson and le français Alexis Vaillant – were a dynamic duo of decadence, and their collaboration a marvellous curatorial feat accomplish-ed within the confines of what I could only imagine (with empathetic despair) as a gloomy, bureaucratic Gotham City.

Turning the trite standard of cross-cultural co-operation into a sensorial journey, ‘Le Voyage Intérieur’ united over 20 artists born or based in France or the UK whose works can be literally (or tenuously) linked to the 19th-century European Symbolist movement. The curators have chosen a curious mascot: the disillusioned Duc Jean de Floressas des Esseintes, protagonist of Joris-Karl Huysmans’ novel A Rebours (Against Nature, 1884), who rejects Parisian social life for seclusion in a sumptuously decorated villa in the sleepy suburb of Fontenay-les-Roses. The exhibition’s interior, designed by Nadia Lauro, is meant to echo des Esseintes’ home, where no expense is spared to cultivate what the Duc considers the ‘distinctive mark of human genius’: artifice. It’s a hard act to follow on a budget.

Pushing through the etched and lacquered doors, I was greeted by Enrico David’s The Flame (2005), a bust of a male sporting a golden coif, evoking both Erté’s stylized forms and an implacable phallic helm. However, I was more immediately seduced by the late Bruno Pelassy’s stunning diaphanous creature floating languidly in the aquarium to the left of David’s sculpture (Untitled, 2001–2). To enter the show after this prelude I had to make my way down what the curators dubbed the Metaphysical Corridor, before reaching 15 formerly humdrum rooms now transformed through texture, colour, sound and light into spaces named the Time Machine, the Black Vampire Rubber Zone and the Infinite White Cube. Fortunately, more of Pelassy’s feathered and bejewelled objects peppered the route like lost treasures. Admiring them, it was impossible not to recall Des Esseintes’ failed lapidary experiment on the shell of a live tortoise, his multi-hued silk socks and his penchant for eggshell china.

‘Le Voyage Intérieur’ did not pretend to be art-historical; it did not trace a detailed genealogy of the literary, artistic and musical works influenced by Symbolism over the past century, although the Symbolist legacy is treated in the catalogue. Rather, it read contemporary art through the somewhat reductive lens of Symbolist decadence, via the Pop-cultural influences of film, music and the decorative arts. There are obvious correspondences with Symbolist iconography in Jean-Luc Verna’s transfer drawings inspired by Fernand Khnopff and Odilon Redon, Richard Hawkins’ disembodied zombie george white (1997) and Emily Wardill’s performance The Feast against Nature (2004). But these more direct references did the visitor a disservice, as it was tempting to use them as a gauge for evaluating the rest of the works in the show.

It was harder to see the connection between Symbolism and Roger Hiorns’ The Coming Affliction Suffered for the Dirt of Love (2001), a large metal sculpture with dazzling copper sulphate tips, which somehow lost its sensual appeal in the endless perspective of the Infinite White Cube. Similarly, Adam Chodzko’s documentation of his unsuccessful attempt to reunite the adults who once played tortured children in Pier Paolo Pasolini’s Salò, or The 120 Says of Sodom (1975) (Réunion: Salò, 1998) felt anecdotal, although parallels could be drawn between Pasolini’s scathing indictment of fascism and reactionary strands in Symbolist thought. These works require digging deep: anathema to the cult of artifice. On the other hand, Mark Leckey’s video LondonAtella (2002), featuring dandyish figures wandering through a virtual London landscape, Jean-Luc Blanc’s untitled glam portrait canvases and Michael Roy’s nail-polish paintings seemed superficial in their intense focus on surface, so perhaps in the end it all balanced out.

The exhibition felt most convincing when the works chimed with their named spaces and effected a transformation of the viewer’s own sense of place. For me this happened twice: in the Egyptian Salon, panelled with Silke Otto-Knapp’s pale washed canvases of eerie hieratic female figures (The Afternoon of a Faun, Dress, and Gold Diggers, 2004), and with Haluk Akakçe’s hallucinogenic sound video projection Birth of Art (2003). Enveloping the viewer in a room aptly named after Gustave Moreau’s The Apparition (1876), Akakçe’s floating, quince-shaped chrome blobs opened into carmine petals as they rotated, reflected and glimmered red and silver and gold. While utterly contemporary in their technology, they provoked the kind of dreamy contemplation or ‘voyage intérieur’ that, despite his best endeavours, remained just out of des Esseintes’ reach.