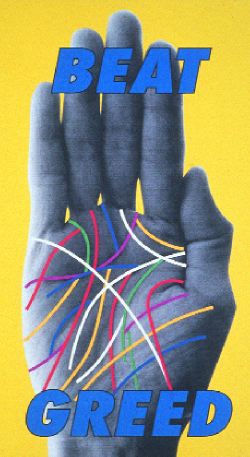 'Face the Truth', 'Have No Fear', 'Refuse Jealousy', 'Check Pride': one look at the creepily optimistic directives fixed to the white walls of Copenhagen's venerable Galerie Asbæk, and you might assume the Church of Scientology had hijacked the place. Dianetics, however, never looked quite so beautiful. For his series 'Let's Have a Show of Hands' (1999), Les Levine scanned a series of human hands, and printed them in bold, high-resolution colour onto linen, captioned with a laconic phraseology straight out of 1970s' children's television.

The choice of subject matter is apropos of Levine, an artist who has created many hands in his dizzying career (entering its fifth decade). Since the early 1960s, he has constantly been at the vanguard of new media, embracing and devouring techniques in a quest to convey his messages faster. After the Conceptualist leanings and Fluxus-flirtations of his early career, he became an acknowledged pioneer of video art, and one of the first artists to use cinematic montage to manipulate space. Levine has fashioned a bold career out of Avid Communication to convey irreverent sign-of-the-times themes and iconography.

Given his antecedents, Levine's choice of medium and message in this exhibition was both curious and deliberate. Using the human hand in this vibrant series is at once an appeal to pacifism and community, and a commentary on the digital insularity of the age. There's a science-fiction perfection to the rendering of each hand via the scanner: each one a perfectly anonymous mirror image. It's this beauty and precision in Levine's technique that lifts the work out of post-Conceptual doldrums. The sloganry of the works smacks of corporate fortune cookies sent via email, and increasingly disembodied mass communication. The sight of so many fingers on so many hands added to the feeling of exponentiality. Under the quiet light of the gallery, it was like the otherworldly sound of one hand clapping - and reproduced.

'Let's Have a Show of Hands' was divided into separate lines on opposing gallery walls, which added to the virtual dimensions of the work. The 'Lifelines' file includes two-word commandments adorned with colour: splashy and whimsical, but also white collar. The Day-Glo shades are the pink, yellow, green, and blue of highlighter pens, which instruct the modern student or office-hack what to remember. Colour traces the palm-lines traditionally 'read' by fortune tellers. Suspending the viewer in a weird ideological inertia that feels occultish, Levine's curt admonitions against temptation roughly correspond to the Ten Commandments. The 'Fearless' series (1999), splayed across a perpendicular wall, includes more mantra-like three word commandments. However, there's an unresolved side to the beautiful colours of the series; an isolated shadow to the fraternal peaceability of the raised hands. It's this itchy, paranoid double-take on millennial peace-and-love that makes Levine's work particularly provoking. After all, no one hand is a pair, and no hand touches another, so where's the communication, where's the 'togetherness'?

The 'Hands' series was flanked by a tribute piece: Make Up: The Story of Albert (1999), a loving video-biography of Levine's friend Albert Mertz, a prolific Danish artist and creator of Denmark's first experimental film, The Escape (1942). For the video, Levine directed another Danish artist, Steen Møller-Rasmussen, in the role of Mertz, who holds forth with gently eccentric mannerisms on his views of art and Modernity. Included are a series of film stills, in which Levine's characteristic art captions take on a hue of fond remembrance, narrating Mertz's ironic view of problems in painting and architecture. Albert's story is not only a look at a seminal artist with a demonstrable influence on the current generation of Nordic mavericks working in new media, but an experimental photo album - an unusually personal endeavour for Levine.