Clio Barnard is an artist and filmmaker whose work has been shown in cinemas, at international film festivals and at galleries including Tate Modern and Tate Britain, London, and MoMA, New York. Her films have been screened on Channel 4 television and have had several international broadcasts. She was the recipient of a Paul Hamlyn Award in 2005 and the 2007 Jerwood/Artangel Open, a major commission for a feature length film, which is currently in production. She is a Reader in Film Studies at the University of Kent.

Back in the day when impressionable kids could watch great films by chance, I sneaked a portable black and white television into my bedroom. With the sound turned down so low I could hear the blood in my ears, and with my face only inches from the screen, I watched Performance (directed by Nicolas Roeg and Donald Cammell, 1970) – and it blew my mind. I travelled deep inside this strange, visceral film; I’d never seen anything like it. A film that could do something, rather than simply be about something, was a revelation.

The next film to do something to me was Wavelength (directed by Michael Snow, 1967), a 45-minute zoom into a photograph of waves on a wall of a studio, with a sound-wave as a soundtrack. As it worked its magic, I moved through perplexity and began to watch myself watching. Perhaps I began to think about time, sound, space, still and moving images, or possibly I drifted off to sleep. Either way, it was my first encounter with Structural Film, and it changed my attitude to cinema. It wasn’t until I saw Wavelength again, years later, introduced by Peter Wollen, that I realized how busy it is, with reel changes and fragments of a murder narrative. The purism of Structural Film, radical and reforming, was absolutely essential to me but it became dogmatic in UK art schools. So Cerith Wyn Evans’ Degrees of Blindness (1988) was an equally jolting moment for me. Rather than drifting off into the thoughtful intellectual meditation of Wavelength, this was a bombardment of colour, opulence and subversion. Degrees of Blindness led me back to Kenneth Anger’s Invocation of My Demon Brother (1969), a black magic ritual, a spell. There are many connections between Invocation of My Demon Brother, Performance and Degrees of Blindness – performance, perception, transgression, as well as Aleister Crowley, magick and blonde eyelashes.

That was all a long time ago. Many films have since made a deep impression on me, too many to write about here. Highlights include: The Gospel According to St Matthew (directed by Pier Paolo Pasolini, 1964), Fear Eats the Soul (Rainer Werner Fassbinder, 1974), Yellow Earth (Kaige Chen, 1984), Paris is Burning (Jennie Livingston, 1990), The Last Bolshevik (Chris Marker, 1992), The Innocents (Jack Clayton, 1961), Chronicle of Summer (Jean Rouch, 1962) and Still Life (Jia Zhangke, 2006).

Pier Paolo Pasolini, The Gospel According to St Matthew (1964), trailer

There is a film that I fell for because of its simple form, astounding complexity and humour. Hollis Frampton’s (nostalgia) (1971) is both a film and a game, an overhead, locked-off shot of a series of photographs being burnt, one by one, on the ring of an electric cooker. A voice-over, read by Frampton’s friend Michael Snow, talks about the author’s relationship to the photograph: for example, ‘I despised this photograph for several years.’ But the voice-over is out of sync – it describes the image you are about to see, rather than the one you are looking at. So you look at the image and try to remember what the previous voice-over told you about it, while trying to memorize the current voice-over so that you can apply it to the next photograph. You are simultaneously thinking about the past, trying to retain the present moment and anticipating the future. (nostalgia) is a film that actively engages, by the act of watching and listening, in a process of past, present and future and all that implies in relation to film. Penny Woolcock’s ‘Tina’ films, Tina Goes Shopping (1999) and Tina Takes a Break (2001), are collaborations between the filmmaker and the residents of an estate in Leeds. The resulting films are two visceral, uncompromising comedies that lie somewhere between documentary and fiction. Woolcock told me that she made the ‘Tina’ films as fiction so that she could tell the truth. A documentary would have incriminated the people who were the subject of the film. Turning the film into fiction protected them. The paradox that you can’t tell the truth by making a documentary has fascinated me for a long time and is at the root of my current practice. The aesthetic of Direct Cinema, brilliant innovative films of the 1960s and ’70s such as Titicut Follies (Frederick Wiseman, 1967) and Grey Gardens (Albert and David Maysles, Ellen Hovde and Muffie Meyer, 1975), still dominates documentary and realist fiction films, an aesthetic shorthand for ‘authenticity’. Claims for truth and for authenticity are always dangerous. Another film that astounded me, first seen on my black and white portable television, was Rashomon (Akira Kurosawa, 1950), which reiterates that the truth is unstable and elusive – especially to filmmakers, because as documentary filmmaker Errol Morris says: ‘Truth isn’t guaranteed by style or expression, truth isn’t guaranteed by anything.’

I’m currently working on a film that responds to Alan Clarke’s Rita, Sue and Bob Too (1986), which has become something of a cult film (and which also, incidentally, has the same producer as Performance, Sandy Lieberson). Clarke is a great director, and Andrea Dunbar is a great playwright, although the film adaptation of the play is a bit like ‘Carry on up the Estate’. Other films by Clarke that I find utterly extraordinary, and which don’t rely on conventional ideas of authenticity, are Road (1987), Christine (1987) and Elephant (1989). These films are formally innovative, and it is extraordinary to think that they were made for television. Road is an adaptation of a stage play by Jim Cartwright and is shot entirely on location in Easington, Co. Durham, a then derelict mining town. Rather than creating realism, the effect of the location is to create distance. Although the subject matter is familiar to Social Realist dramas, as are the cast, the location and the mobile camera, Road is very different. There is a Brechtian distancing, a puncturing awareness of the construct, with stylized performances and, crucially, a real location that looks like a set. The alchemy by which the actual becomes the imagined – by which I mean the processes and the form of the film – is crucial. My films are not solely concerned with form but as form is the portal between the actual and the imagined, it needs to be constantly re-examined. 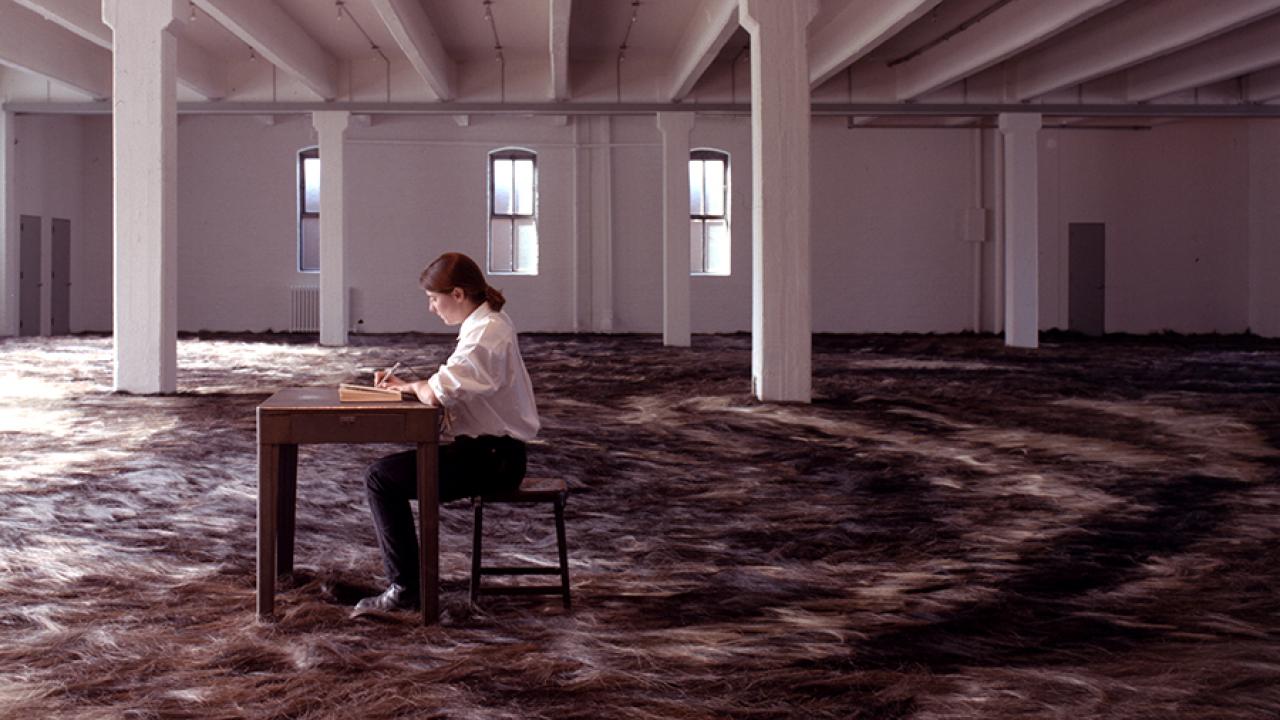