[member:membership-name]
[member:full-name]
VIEW MY DASHBOARD
BY Jordan Wolfson in Influences | 01 MAY 14

Lately, I’ve been thinking a lot about Ingmar Bergman and Jeff Koons. When I was completing my most recent art work, (Female figure) (2014), after returning home from the studio each evening, I’d plop myself down on the couch and put on a Bergman film. This working period for me is a compacted haze and, out of all the Bergman films I watched, I can only specifically recall three: Wild Strawberries (1957), Winter Light (1962) and Scenes from a Marriage (1973).

After watching the films, I’d lie in bed or take a bath and read from the pink monograph Jeff Koons: The Sculptor (1994). It has amazing quotes by the artist, things that confused me a great deal but also opened me up to a state of non-judgement, which is what Koons wants, of course, but in my case it was true! And I’m not just saying that because he says that!

This ritual warped my mind, in a good way and, thinking back, I wanted that, because both artists reminded me of a part of myself that I shouldn’t forget to listen to: intuition.

This is very important. An artist has nothing but their intuition. It’s the crucial compass and defining characteristic of any free-thinking individual. I spent a good part of my life doubting my ideas and intentions in the fear that I’d be judged or held accountable by some invisible court. I imagined that what I wanted artistically would be judged and taken as literal intentions, instead of as what they were and always will be: things that are imagined. So, I’d like to start with a list of films that influenced me as a child and teenager, and then discuss Bergman and Koons.

As a young child, I was obsessed with storyline and puppeteering. For example, when a puppet walks on his own: I still find this uncanny. Think of Kermit the Frog riding a bicycle. The director, Jim Henson, illustrated the deaths of the older characters in The Dark Crystal in a particular way. When they died, their bodies cracked and then crumbled, imploding into a pile of dried material and dust. This was my first impression of death and it lead to a recurring dream where a field of grey silk was destroyed by scores of animated balls – they had faces, eyes and mouths, covered with razor-sharp spikes, and they grinned with pleasure – and, as the surface of the silk dissolved into dust, I’d wake with a severe panic attack.

As a kid, I loved singing and dancing, and the crab in this film still makes me feel crazy. I was also sexually aroused by Ariel and had fantasies of making love to her, but when you’re a kid you don’t think ‘make love’, you think more in terms of sex/body, touch, contact; the fantasy is less about the action of sex and more about the permissions that are crossed in reaching that point of intimacy, wherein as the child you self-consciously recognize and utilize your prematurity as the thing you’d like to knowingly surrender.

As a teenager, I was obsessed with the symbolism of this film and would often recite the opening dialogue in a British accent to impress my peers at school. I would also watch it with girls I was trying to seduce. We’d sit on the living room couch and I’d creep towards them like a snake after a mouse, all the while testing them on their symbolic analysis of the film, trying to deem if they were intelligent enough to be kissed. I was a very, very arrogant young man. When I was alone I’d masturbate to Stanley Kubrickesque females, mostly eroticized in a position of impending harm. It wasn’t the violence that aroused me, but the paradoxical way that Kubrick framed women. Once I got to art school, I dismissed the film as contrived but then, in my mid-to-late 20s, I read the book and watched the film again. It was like an entirely different film. I loved it and felt it was genius.

Comparing Koons and Bergman might be like comparing a steak with a grapefruit, but this isn’t about their work, it’s about their intentions. I’d like to point out some interesting and incomplete thoughts I have on differences and similarities between Koons and Bergman.

The final scene of Scenes from a Marriage cuts to the colour brown, without sound. It’s abrupt and cold; the film appears simply to shut off. For me, this is the most profound and telling moment of the film. It illustrates the indifferent universe we live inside and in contradiction to. I believe the great struggle of humanity is its inability to reconcile itself with the indifference of the natural world. We are constantly looking for reason where there isn’t any. Things are, then they move, and then they react to something else. When you look at a cliff with a piece that’s fallen off it, you don’t say: ‘Oh, that cliff would look better if that piece hadn’t fallen off.’ That’s the indifference of nature. You can’t stop it; it moves without your determination or deliberations and I think Bergman captures this in his pacing, plot, character and edit: there’s nothing judged or manipulative in his films, it’s all just simply witnessed. Koons’s Woman in Tub (1988) also has an indifferent cut. The head of the sculpture abruptly ends just above the woman’s lips. For me, this abrupt cut establishes a cognitive reaction in the viewer that has to do with perceiving an incomplete image. Secondly, it defines the space around the object. Thirdly, it abstracts the drama, the impending violence, and the contradicted joy of the object. The cut transforms this sculpture into a shapeless rock; an anonymous form.

In the opening scene of Bergman’s Persona (1966), when the actors appear to look into the camera, my impression is that this is in order to establish the audience as the third witness of the film. Bergman may be intuitively implying that the film is a construction, and you (the audience) are its witness, but you are not its judge: you are as much part of the construction as the actors, the camera and even the filmmaker himself. In Koons’s series ‘Made in Heaven’ (1989–91), and the magazine advertisements he made for it, he’s often looking into the camera and creating a similar effect. Koons’s gaze confides in the viewer that this is a construction that isn’t intended to hurt them but to embrace them, preceded by an invitation to join him or simply watch. Koons creates a safe space, where there appears to be no safety at all.

Jordan Wolfson lives in Los Angeles, usa. In 2013, he had solo shows at Chisenhale Gallery, London, UK; S.M.A.K. Ghent, Belgium; and the Center for Contemporary Art Ujazdowski Castle, Warsaw, Poland. In 2014, he had a solo show at David Zwirner, New York, USA, and his work was exhibited at McLellan Galleries, Glasgow, UK, as part of Glasgow International. 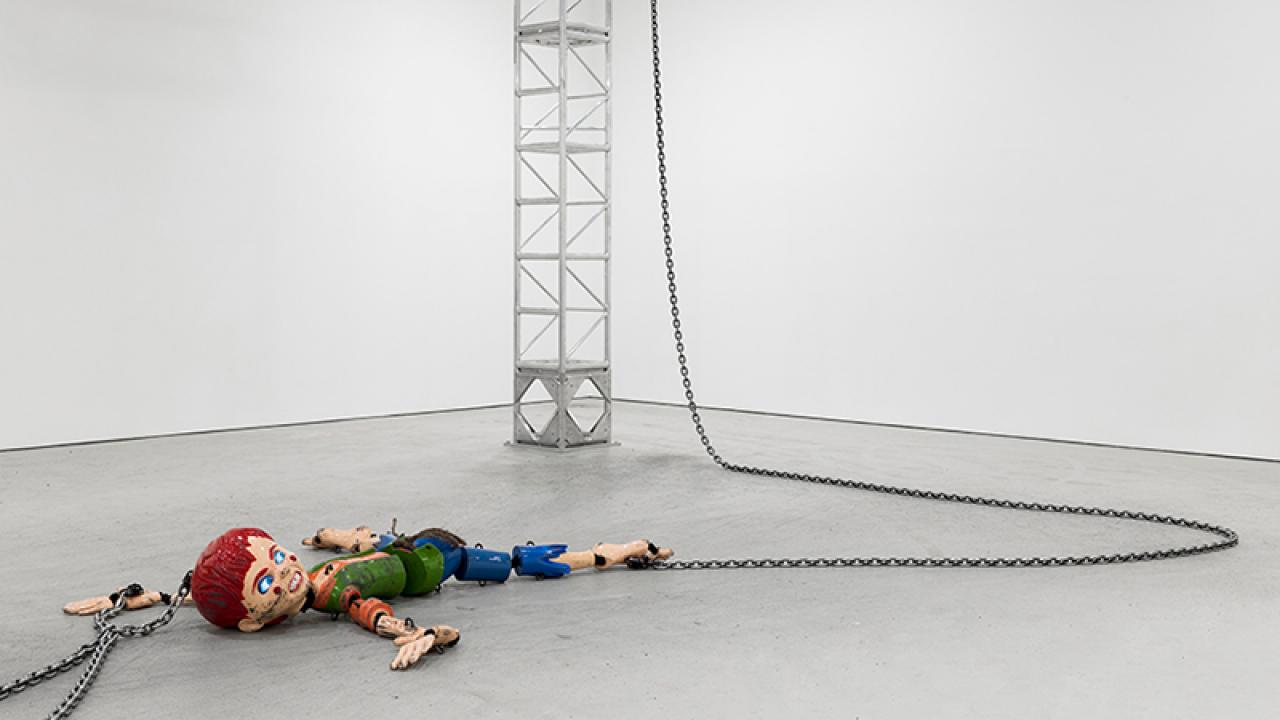