On disasters and motivation 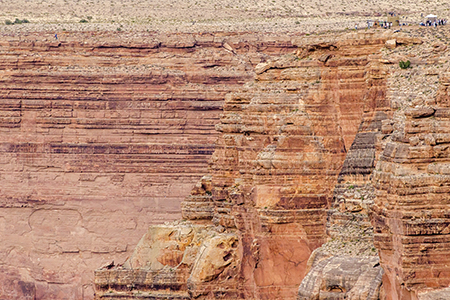 The simultaneity of thunderstorms, droughts, wildfires, heat waves, the widest tornado on record, and flood after flood could deliver me to the Bible for metaphors. Disaster after disaster, natural like the aforementioned, though often affected by human machinations; and all-too-human, and inhuman, murder, rape, war. Multifarious, intermingled disasters make separating artificial from natural – irrelevant?

These extremes rendered Nik Wallenda’s daring, net-less, high-wire walk, 450 metres above the Grand Canyon, as ho-hum excitement. On tv, Wallenda looked tiny and strange, the Canyon massive and imperturbable in the background. Man on a wire against the elements. It was very windy. He had to use everything he had, he said afterward, to stay up there. There’s the death drive, I thought, in living colour.

Motivation is fascinating. Being without motivation is also fascinating, but probably not for the unmotivated, since fascination is one aspect of motivation, and the unmotivated wouldn’t experience it much. Also, they have a whole life ahead of them, with a lot of time and nothing they really want to do or achieve, which could be frustrating, making the mean­inglessness of life more piquant. Or, they might be content lying around on a couch. Human society bends that way, too, with variances and all sorts of adaptations accepted. In a writing class, an 18-year-old student told me his interest in life was soccer. Playing? I asked. No, watching, he said. In a stadium? No, on tv, he said. Is that all you’re interested in, really? He warily nodded. But that’s not a disaster, it’s a life.

Disasters are events out of the ordinary, but happening every day they seem more ordinary, too, just a part of life. Get used to it, people in the us say, get over it.

I would never describe a disaster as mediocre. The ordinary is also dis­tinct from a mediocrity. Being medi­ocre requires an effort not to be ordinary, then failing. When I hear the term ‘ordinary people’, always a mischaracterization, I reach for my remote. One night I did, and with petulant curiosity, turned to The Voice, the extraordinary ordinary (or vice versa) singing contest. On this night, it had narrowed to three con­tenders who each sounded like many famous but common-sounding singers, or mediocrities because they try harder. The three contestants were paid exuberant tribute by the judges and audience. Seeing this, I realized I was watching the Emperor’s New Clothes version of a singing contest. People were crazily excited. I figured the winner had to be the smiling blonde girl, still in high school. She had everything, and that right amount of nothing much which made her perfectly ordinary, and perfect for the dream: ‘If she can do it, I can.’

On The Voice, she sang for an audience of millions. How at ease, I thought, she looks onstage, which achievement – ease – is meant itself to be a modern-day miracle. The girl started to sing and imitated what hundreds of pop singers have modeled on tv since before her birth. There was no sense, to my eye, of her wanting to make something her own, just to do what everyone else did as well as she could. She had the moves down, handling the mic, doing the familiar gestures, and could add the usual trill and vibrato here and there. The voice was a sweet, unmemorable voice, a voice like so many voices. I didn’t watch to the end, the outcome seemed clear, and she won a day or so later.

Franz Kafka’s short story ‘Josephine the Singer, or the Mouse Folk’ (1924) begins with these sentences: ‘Our singer is called Josephine. Anyone who has not heard her does not know the power of song.’ Kafka often starts his human mysteries with a declaration, giving readers a reason to believe in the reality of the story to come. The people who worship Josephine’s singing ‘are quite unmusical’, but, Kafka continues, her singing is so magnificent ‘even the most insensitive cannot be deaf to it’. A paragraph later, he sets up a barrier to the first statements: ‘Among intimates we freely admit to one another that Josephine’s singing, as singing, is nothing out of the ordinary.’ A few lines later: ‘Is it in fact singing at all?’ This tale tells so much, is about so much, I wouldn’t try to sum it up. Kafka doesn’t allow for summation. His contradictions and self-mocking knowingness also deny me the possibility of telling you the story. The story can’t be told. Rather, I want to say, hesitantly, that the story, in part, describes the conditions in which a singer, an artist, and her public, or her people, rely, in a profound sense, upon each other for meaning, joy, cohesiveness, all certainty of which is impossible, and standard-less. What Josephine ‘wants’, Kafka writes near the end, ‘is public, unambiguous, permanent recognition of her art, going far beyond any precedent so far known’. Kafka understood futility. What a joke. Then he kept writing.

Whatever else it is, and it is many things, ‘Josephine the Singer, or the Mouse Folk’ is one of the greatest works of art criticism ever written. At the least, the most alert and sensitive.