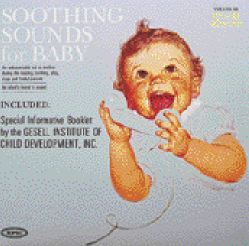 In a recent letter to The Times about contemporary music, a rather irate reader fulminated that pubs should play 'popular songs from the 20s and 30s, instead of the repetitious music that makes young people today so stressed and violent'. 1

Normally, the apoplectic fits of reactionary, retired colonels leave me cold, but on this occasion a small glimmer of sympathy glowed in my heart. I had just been listening to Raymond Scott's recently re-released 'Soothing Sounds for Baby' albums; recordings which fail so wildly in their remit as ambient music for babies, that they have quietly become three of the most quirkily influential recordings in electronic music.

Released in 1964 in conjunction with The Gesell Institute of Child Development, Inc., each record was designed as an aural 'toy' to be played in the nursery to calm or stimulate the newborn child. Volume one is for babies aged 1-6 months, volume two for 6-12 months, and volume three for 12-18 months, each becoming gradually more sophisticated, mirroring the child's development. The tag line on each album is 'An Infant's Friend In Sound' and the cover text describes them as 'an indispensable aid to mother during the feeding, teething, play, sleep, and fretful periods'. Whale sounds? Smooth, calming washes of ambient sound? Hardly. Each ten to fifteen minute track consists of nagging, trebly repetitive motifs overlaid with sickly sweet freeform nursery melodies. Played at low volume, as was originally intended, the clicks, clacks, and snatches of glissando melodies, swiftly lodge themselves in the mind. With titles such as 'Tempo Block' or 'Little Miss Echo', the recordings are eerie and uncanny in extremis, a sure-fire recipe for disturbed childhood - a fact partly evinced by the low sales figures on its initial release.

Professionally, Scott was a band leader. In the 30s, he led the CBS radio big band orchestra before forming the Raymond Scott Quintette (sic). Scott was something of a slave-driver and perfectionist. Johnny Williams, drummer for the Quintette during the late 30s, complained with uncanny foresight that, to Scott, 'we were machines, only we had names'. 2 The Quintette's tight but eccentric three minute compositions quickly gained the attention of Warner Bros., who in 1943 began to use them as soundtracks to Bugs Bunny cartoons.

Around the same time, Scott was finding the band leader life increasingly frustrating. Playing the same insipid big band hits night after night led him to form Manhattan Research, Inc., an 'electronic research corporation'. The company was essentially Scott's toolshed, a studio in which he tinkered between concerts, making primitive electronic audio equipment to a rather astonishing degree of success. (He took out patents on his 'Electronium', 'Clavivox', and 'Bandito the Bongo Artist' drum machine.) That one of Scott's apprentices was Robert Moog, is no mean testimony to his influence. Scott became increasingly involved in developing his fledgling synthesisers and sequencers, eventually retiring from orchestral work to devote himself wholeheartedly to his pet projects.

Soothing Sounds for Baby, Vol. One (1963) was released at a time when American classical music was finding itself at the very cusp of experimentalism. Scott was a graduate of the highly regarded Juilliard School, where Steve Reich and Phillip Glass later trained. La Monte Young and Terry Riley had already begun to establish themselves as radical young composers. Repetition was the principle musical weapon used by both the Minimalist composers and Raymond Scott. Sure, extreme repetition and recapitulation are nothing new - see Eric Satie's 'Vexations' (1893), a phrase to be played at least 840 times, or any of the rather more eccentric rondos and canons of the Baroque period - but in traditional Western classical music, repetition is dramatised and given direction, always heading towards a climax or resolution. Minimalism did away with direction to create what Glass described as 'intentionless music' - music effectively in stasis.

Scott and the Gesell Institute certainly had an inkling of the effect highly repetitive music could have. The rather aptly named Moog Tests, carried out in the 70s to determine the effect of music on babies, showed that melodic treble sounds, such as Scott's, were pleasing to infants, although the timbre of the sound was of more interest than the melody itself. 3 The Moog tests found little understanding of rhythmic understanding in infants under the age of 12 months. The 'Soothing Sounds for Baby' team conflated a baby's enjoyment at repeating an action, with actual rhythmic intention - an oddly latent echo of Eastern musical structures or Minimalist stasis.

The influence of the 'Soothing Sounds...' series can be found throughout the world of today's electronica, be it in Plone's childlike, imaginary TV themes, or the quietly nagging clicks and whirrs of recordings on the Mille Plateaux label. But where does Scott's legacy really lie? Its desire to pull away from traditional musical structures leads it away from imitation into forms far more suited to algorithms or ones and zeroes. Take dance music, in which repetition finds itself the vehicle for iconoclasm, exhilaration, and as the glorified centrifugal point of the form.

Scott's salvation and damnation has been his classification as a musical oddity. The work often finds its way into the pages of 'Incredibly Strange Music', or filed away in record shops under 'Exotica' and 'Easy Listening', preserved as a curio rather than for its very real contribution to 20th-century music. Perhaps a result of his commercial work for television, advertising, and, in later years, as electronics advisor to Berry Gordy at Motown, Scott's music has something of a naïve tarnish to it. Perhaps world-weary 21st-century ears are the wrong ones with which to genuinely appreciate his idealistic project. 'Soothing Sounds for Baby' now sounds like a creepy utopianism - Brian Eno fed through Lynchian 50s Americana. Eno, Stockhausen, Reich, Krautrock, and Kraftwerk have taken the lion's share of the credit as 'serious' pioneers, whilst Scott's influence seems to work from a position of being a oddity as much as anything else, the mad inventor ahead of his years. Although it's intriguingly futuristic for its time, his real innovations are in serious danger of becoming the victim of irony, the aural equivalent of kitsch retro furniture.

2. Irwin Chusid, The Late Night Side of Raymond Scott, on www.RaymondScott.com, 2000.