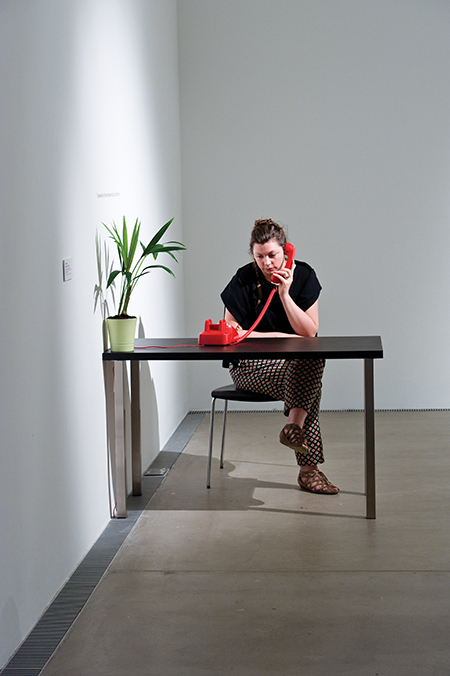 The Hayward Touring exhibition ‘Listening’ – which will travel to Sheffield and Norwich following its stint in Liverpool – proposes, in the words of its curator, Sam Belinfante, ‘to interrogate the act of listening itself, rather than merely its aural objects’. As such, it sets itself a lofty critical aim – to offer fresh insight into a phenomenological position inhabited by almost all of us, almost all of the time – bringing together works by 16 artists and one artist duo, not all of whom deal directly in sound.

In sum, three hours spent circulating the show’s six galleries came up short on groundbreaking insight, with the diversity of works on show failing to cohere into a meaningful whole. This was an exhibition about listening as something both public and private, reflexive and automatic, punctual and elliptical, subject and object. It is experienced as something carried out intentionally in solitude (in the pieces by Laurie Anderson and Carey Young), as something inescapable (Ragnar Kjartansson and Hannah Rickards), and as something that flickers mercurially at the margins of consciousness (Laure Prouvost and Haroon Mirza). The show’s ‘interrogation’ is thus perhaps more favourably understood as a speculative – and largely worthwhile – exercise in forming an inclusive new canon around the category of acoustic attention.

Some of Belinfante’s selections, nevertheless, seemed wilfully obtuse. Ed Atkins is an artist whose films brim and bubble with sonic vitality; however, he was represented here by a brace of new drawings (elective mute 7 and 8, both 2014) that offered monumental visual renderings of his writing practice, and which one couldn’t help but read as a missed opportunity. Likewise, Mirza – known for his inventive auditory composition – was not shown off here to his best advantage. The lo-fi sound installation Siren (2012) is thought-provoking in its oscillation between background hum and conscious focus, but the anechoic chamber that often provides the backdrop to Mirza’s works was present here not as an immersive space but as a maquette, suspended from the ceiling so that viewers could just about get their heads into it.

Other artists were more judiciously represented. Rickards’s Some people say they think it sounds like aluminium foil but to me aluminium foil is not the sound (2014) is a large, screen-printed text piece in which an unnamed interpolator makes faltering attempts to describe the acoustic environment produced by the Aurora Borealis, presenting sound as something impossible to translate. Janet Cardiff and George Bures Miller’s Cabin Fever (2004) brings the duo’s concern for aesthetic effects produced at the intersections of sight, sound and duration into tight focus, leveraging minimal ingredients to dramatic effect. Listening to a binaural field recording through headphones while peering into a diorama depicting dark woods and a cabin whose lights are turned on and off at pointed intervals, the auditory component of the work becomes a hallucinatory vector for the visual; we see the footsteps approaching the cabin and the violence that ensues almost as keenly as we hear them.

Imogen Stidworthy’s The Whisper Heard (2003) comprises audio recordings and footage of two individuals – a three-year old learning to speak and an adult suffering from a form of aphasia – struggling to express themselves through language. The piece succeeds in framing each attempted sentence as a kind of neurological feedback loop: the speakers proceed tentatively, balancing utterances against an unusually intense self-directed listening. Their stilted, self-conscious monologues are reminiscent of the one brought to life in Katarina Zdjelar’s excellent video Shoum (2009), alongside which The Whisper Heard ought one day to be shown. It is Prouvost’s works, however, that proved most compelling. In an exhibition whose curatorial direction enticed and frustrated at numerous turns, withholding works that might have spoken more directly to the show’s theme and neglecting to develop certain promising lines of inquiry, Prouvost’s pieces artfully brought about a stranger and more intimate frustration on account of their tendency to disappear just as quickly as they come to life. In It’s magic electronics (2014), Prouvost clicks her fingers as her voice instructs us to follow a disco light around the darkened gallery space; the sudden sense of having our attention pulled hither and thither before everything fades to black distils into a few short seconds the attempt to take this show at its word.