The flyer for Double Fly Art Centre’s (DFAC) performance, 108 Deaths (2016), at Shanghai Chi K11 Art Museum, states: ‘The entire process will be filmed.’ In China, recent performance art has often dramatized an absurd dilemma, as in Li Binyuan’s Long Jump (2015), in which the artist leaps between two pillars, occasionally missing his footing on landing and slamming into the concrete. The jump is triggered by passing vehicles and the work concerns the relinquishing of free-will. DFAC does not fit this model: its relaxed collective ethos is warm and chaotic, playful and boyish. The nine-strong all male team, founded in 2008, typically expounds a slack nonchalance involving silly hats, nudity, body paint, mooning and pantomime costumes; it’s a joyous masculinity – all bums and boxer shorts. Previous actions, such as Double Star Project (2011), in which the group bathed in rice porridge in a Swiss hotel, have been largely unscripted but demonstrate collective commitment to a singular purpose.

108 Deaths originates in the story of the 108-man outlaw army, known as the Stars of Destiny, which ultimately perishes in Water Margin, one of the four great classical novels of Chinese literature, written in the mid-14th century and attributed to Shi Nai’an. Episodes from Kuk Kwok-leung’s TV drama All Men Are Brothers (2011), based on the book, were shown on multiple screens around the space throughout the event. The performance area was defined by an expanse of green-screen material, bracketed by two tripods supporting video cameras. As members of the audience entered, they were given red envelopes (hong bao). In the Chinese theatre, these envelopes are traditionally used to make discreet monetary gifts to an actor who plays the role of a character that dies, as compensation for the ill fortune such a part may bring.

108 Deaths consisted of two parts. Initially, the group shambled onto the green area and read a definition of performance art off their phones. What began as an impromptu chorus quickly fell apart into a cacophony of separate voices, indicating the importance of DFAC’s ‘free collective’ ethos. The company then retired to a hidden backstage area while members of the audience were told that they could put donations for the actors into the red envelopes: this would permit them to participate in enacting the 108 Deaths. 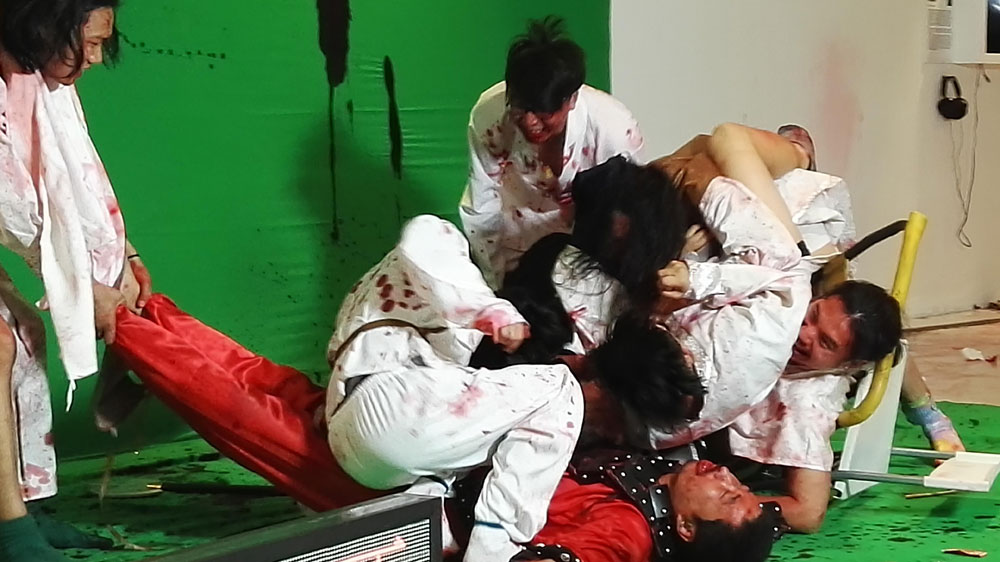 As the work got underway, the action was swift – a series of brief fights using handheld wooden weapons that were painted silver. The deaths were not drawn out and the players collapsed melodramatically on top of one another as soon as they were touched.  Dressed in 14th-century fancy dress, revealing bits of underwear and sock, the overall effect was a surprising amalgam of the 1970s disco group the Village People and the Viennese actionists. There was a lot of blood, although it was clearly fake, smelling of strawberries as  it was sprayed and spat out, staining clothes and walls.

An LED display at the front of the stage kept count of the accruing deaths and determined the duration of the action. Those audience members who were willing to put some money in the envelopes occasionally joined in, tentatively prodding the performers’ backs or necks with wooden sabres. Some of the activity spilled into contiguous areas off stage and off camera. Occasionally, all of the players disappeared backstage, returning with a succession of props, including a ladder, flowers and a toilet, which were dragged on stage and then discarded. The set, at the end, was a scene of debris smeared with ‘blood’. 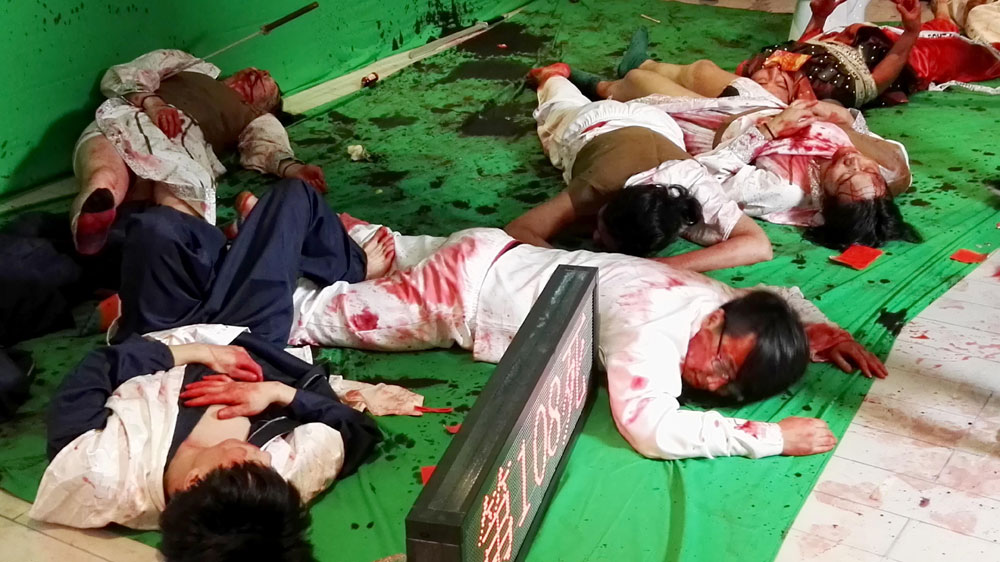 In the early 2000s, a new, gruesome genre of live-to-camera performance emerged: the decapitation video, most recently propagated by the terrorist group Daesh. Despite the rambunctious impression, 108 Deaths staged a massacre. The group evokes multiple levels of authenticity between the live experience and its document, recorded against a green-screen on static cameras. These executions were farcical and perfunctory but real money was handed over in the red envelopes. The deaths of fictitious outlaws in silly costumes, derived indirectly (and inaccurately) from the original novel, itself lost to a loose retelling through the All Men Are Brothers drama, completed a circuit of aestheticization and continuous update. Here, death is equated not with endings but with episodes. DFAC presents a messy example of individuals improvising as a collective around a narrative in flux. Their community, in the form of a living pile of dead bodies, proclaims a story told and retold until its original purpose has been forgotten.

Andrew Stooke is an artist and writer based in Shanghai.