‘Knowing too much can stifle creativity – a little knowledge is perhaps more potent.’ In a video on the Common Guild’s website, Simon Starling discusses the genesis of At Twilight: A play for two actors, three musicians, eight masks (and a donkey costume) in W.B. Yeats’s interest in Japanese ‘Noh’ – an ancient form of traditional Japanese dance theatre that was the inspiration for the Irish poet’s short play At The Hawk’s Well (1916). While the comment is in relation to Yeats’s creative process, it could just as easily be applied to Starling’s own play. This re-imagining/remix of Yeats’s mythical production uses the original as a lens with which to focus on a pivotal moment in history, drawing a little from each of the many academic and literary texts that were the source material for its script and staging.

First presented in 1916, At The Hawk’s Well was the result of a fortuitous meeting of minds. Introduced to Noh by Ezra Pound – who from 1913–16 was Yeats’s secretary and lived with him at Stone Cottage in Ashdown Forest, Sussex – it was the arrival in London of Japanese dancer Michio Ito¯ that provided the knowledge and skills to realize the performance. Ito¯ performed the play’s signature dance as the ‘Guardian of the Well’, wearing a patterned hawk costume designed by the illustrator Edmund Dulac – choreographed here by the Venezuelan dancer Javier De Frutos, with the recorded performance projected onto the back of the stage.

Yeats’s play tells of a young Irish warrior, Cuchulain, and his search for immortality at a magic well, taking this hero of Irish folklore and imbuing his story with Japanese theatrical tradition. A hundred years after its first staging, At Twilight … incorporates sections of this theatrical curiosity while providing a window onto a ‘twilight moment’ in history. In 1916, Europe was on the verge of major change and the realities of war were violently encroaching on the art movements of the time, in particular the modernist vision of human progress in the machine age. Yet, while that might suggest a rather downbeat, serious affair, it represents only half the story. There were dark moments in this clever and beautifully staged play, but At Twilight … was also gently funny, drawing much humour from the Yeats/Pound, mentor/mentee relationship and, in particular, Pound’s energetic attempts to coach Yeats, 20 years his senior, in the finer points of fencing.

Presented on the lawn of Alexander ‘Greek’ Thomson’s mid-19th-century Holmwood House in Glasgow’s south side, with the audience seated on cushions as daylight faded on a late summer’s evening, the combination of setting and staging made for a magical experience. With props and costumes ‘borrowed’ from Starling’s equally engaging ‘At Twilight’ exhibition at The Common Guild, the simple set consisted of nine charred, ‘blast tree’ sculptures either side of the small stage: a reference to the scarred battlefields of World War I. Their black branches were adorned with eight masks – a fundamental element of Noh theatre. These masks were the play’s key theatrical device, enabling the two actors – who, unmasked, introduced themselves as Starling and the play’s co-writer and director, Scottish theatre producer Graham Eatough – to step in and out of characters. More than this, the masks also acted as doorways to other people and stories that intersected the splintered narrative, with a particular focus on the short-lived vorticist movement. 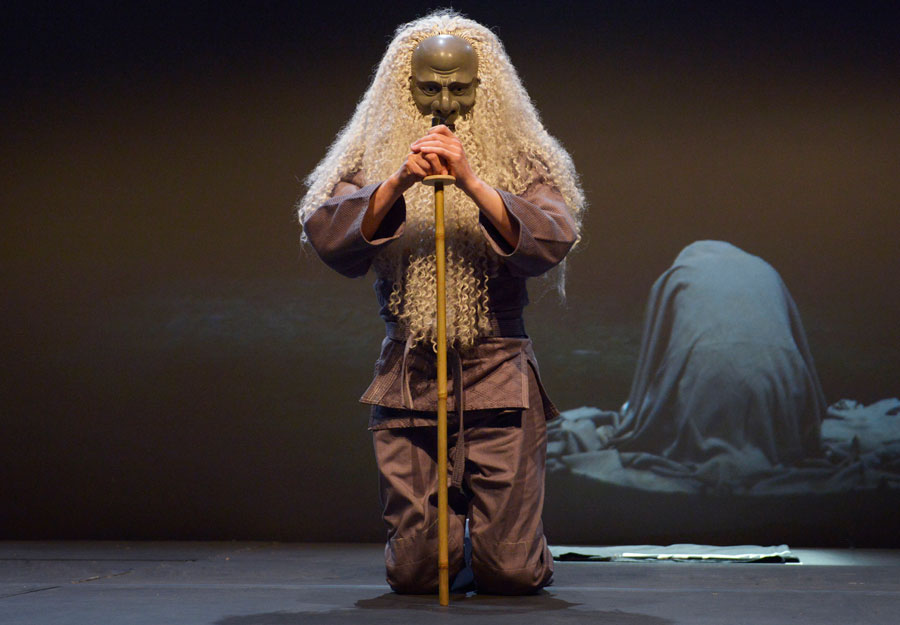 The mask representing Pound, for instance, was based on a bust by the French sculptor Henri Gaudier-Brzeska, who was killed in the trenches in 1915. Other masks represented the head of Jacob Epstein’s brutally mechanistic Rock Drill (1913–15) – an embodiment of male aggression that Epstein dismantled in 1916. (‘Violence was no longer an impulse to be celebrated,’ concludes ‘Starling’ in the play.) The wealthy socialite and patron of the arts Nancy Cunard – who hosted the first performance of At The Hawk’s Well at her London residence and with whom Pound had an affair – was represented by a mask based on Constantin Brâncus¸i’s beautifully abstract sculpture, Portrait of Nancy Cunard (1925–27).

As all these references suggest, this was a historically rich production – as much theatrical lecture as play. (The inclusion of a blast tree lectern emphasized this point.) Densely packed with factual asides culled from letters, history books and biographies, it nevertheless possessed a delightfully light touch thanks to its sprightly pace and the weirdly propulsive, Noh-style acoustic soundtrack provided by Joshua Abrams and Natural Information Society. And the donkey costume of the play’s title? A glumly grey Eeyore of Winnie-the-Pooh fame, which the actors appeared from at the start and got back into at the end. A.A. Milne, we were told, based Pooh’s Hundred Acre Wood on Ashdown Forest and, when Yeats and Pound were dabbling in Japanese theatre, Milne was writing war propaganda for the British government. A little bit of information that brought another layer of intrigue and entertainment to this exploration of the half-light before the dark.