‘The space is everything, it’s really important … The space is carrying a lot of the piece.’ Speaking a few days before the Glasgow performance of Sink Down Mountain, Rise Up Valley, Paris-based German artist Ulla von Brandenburg was unequivocal about the role of Langside Hall – a mid-19th century bank turned municipal venue on Glasgow’s Southside – in the staging of her hour-long production presented by The Common Guild. Billed as ‘a play for five actors and a chorus’ and inspired by the history and rituals of the Saint-Simonian commune, this dreamy mix of shiny-eyed idealism and ceremonial dressing took place across three rooms, moving upstairs from the hallway before heading back down to a main space where the audience was seated.

The Saint-Simonians were leftist libertarians who, among other things, believed in the coming of a female messiah, or ‘supreme mother’. Led by the charismatic and eccentric Barthélemy-Prosper Enfantin – referred to as Le père by followers – in the aftermath of the 1830 French Revolution they formed a commune on the outskirts of Paris, a place where they could punctuate their days with a variety of rituals that appeared more religious than political. Set in this commune, Von Brandenburg’s play drew heavily on their ritualistic lifestyle, in particular the precise and protracted process of dressing, dictated by a costume that included a waistcoat double-buttoned on the back, thus turning the act of putting it on into a shared task. The message of mutuality – of a common interest in each other’s well-being – conveyed by this simple garment was central to the play. With no clear narrative, it was a ‘story’ told by the creation of atmosphere through the repetitive, almost hypnotic combination of obsessive behaviour and the beautifully simple, hymn-like singing of the all-female choir.

There were elements familiar to anyone with an interest in Von Brandenburg’s work. Most striking was the strong use of colour and contrast to convey mood and conjure meaning. The Saint-Simonians’ immaculately tailored clothes, completed with blue doublet, white cotton undershirts and trousers, and neat black leather pumps, heightened the visual impact of the players and emphasized the ideology of equality and fraternity. The minimal staging – further stripped back from when first performed at the 2015 Performatif Festival, Brussels – highlighted the production’s site-specific nature and the artist’s use of fabric and simple, static imagery such as an eye-shaped painting in white, green and black. A dynamic, many-coloured patchwork curtain acted as an entrance and backdrop to the main space, before being ceremoniously folded up and set aside. 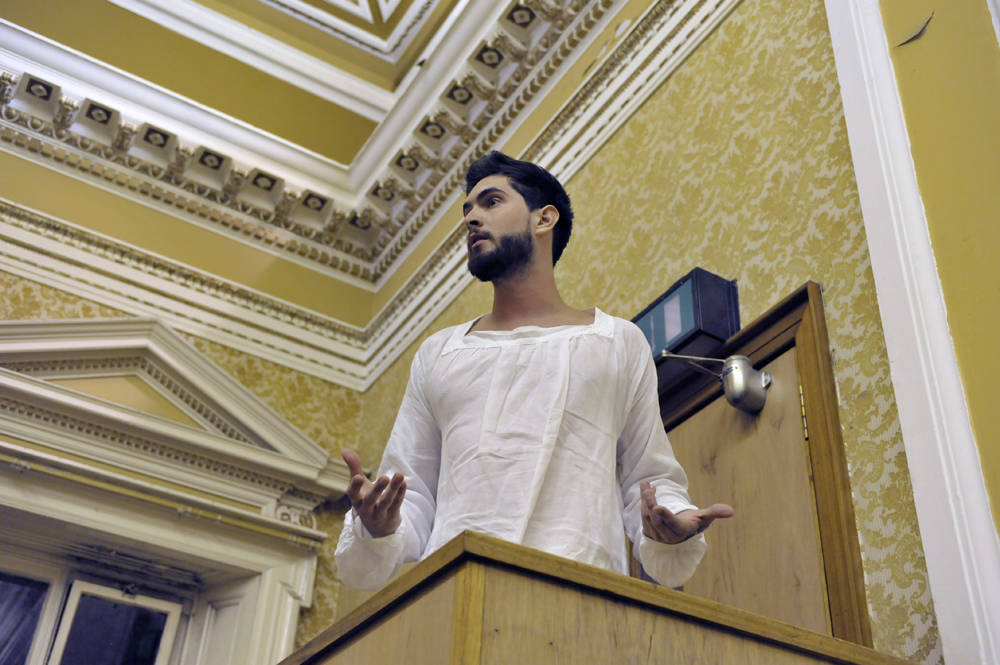 Viewed through a contemporary lens, the ideas and actions of the Saint-Simonians can seem contradictory, even farcical. Enfantin’s commune of men would spend much of their time singing; eschewing servants – highly unusual for men of their class – they shared roles such as cooking, bed making and gardening. And while their ‘different but equal’ doctrine in relation to the roles of the sexes could be seen as proto-feminist, this was a delayed notion of equality. Women would only be equal once a new society was achieved – and the female messiah, despite extensive searching, was never found.

The final scene of the play featured the ‘dead’ Talabot – a key disciple of Le père, played by a woman in what was perhaps a reference to the group’s messianic ideas – being dressed in boldly patterned, red, white and blue death robes, before a dramatic resurrection. This act, combined with the choir’s refrain (sang in French) of ‘For me I am the endlessness’, seemed to foreground the contemporary relevance of the Saint-Simonians’ shaky ideology. While in any clearly tangible way this may be fanciful – we’re unlikely to see revolutionaries in back-buttoned waistcoats any time soon – what Sink Down Mountain, Rise Up Valley did, like much of Von Brandenburg’s work, was to bring an historical moment and its ideas into the present, to create a place for possibility and alternative perception. Crucially in the context of this performance, it also provided a gathering point, a metaphorical space that is as much about sustaining the soul as stretching the mind. While the physical surroundings of Langside Hall informed its staging, the most important space here was in hearts and minds – from 19th century Paris to 21st century Glasgow.

Reviews
What Can We Learn from a Return to Witchcraft?