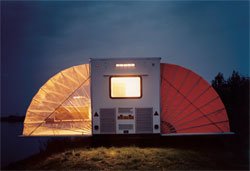 This coming autumn Boston’s ICA is decamping from its rather quaint Back Bay headquarters and moving into a spiffy new Diller Scofidio + Renfro-designed home on the city’s harbour waterfront. Appropriately enough, the farewell exhibition in the old space was imported from overseas celebrating transience, relocation and portability. ‘Living In Motion’ was originally put together by the Vitra Design Museum in Weil am Rhein, Germany, and has been travelling around the world for the last few years; the Boston venue provided its only US appearance. The three gallery floors were filled with delightful, clever objects: things that come apart, fit together, contract, expand, inflate, stack, slide and shuffle. Furniture, mostly – hinged chairs and tables with wheels – but an expanded notion of what ‘furniture’ includes: shading at one end into architecture and at the other into clothing. So there were also plans and mock-ups of modular homes, baskets and blankets, cooking pots and cargo pants. ‘Flexibility’ as a theme proved to be itself a very flexible concept.

The idea of function provided the organizing structure. The objects were divided into six categories: ‘Assembling and Disassembling’, ‘Folding and Unfolding’, ‘Adapting’, ‘Combining’, ‘Transporting’ and ‘Wearing and Carrying’. What was at stake, in other words, was not why people transport their environments, but how. Which seems fitting. There is something essentially functionalist in the idea of mobile existence: it’s all about breaking down a mythologized idea of ‘home’ into its component parts. Living becomes a set of needs, practical problems and more or less efficient solutions. How do you support the reclining body? Where do you sleep? How much privacy do you require? What do you do for warmth? How do you cook your food? How quickly can you set up and take down your shelter? How do you get it from place to place?

The various answers to these questions cut across eras and transcend culture and style. Or at least, that’s how it looked in the exhibition. The show’s organization highlighted formal rhymes: Buckminster Fuller’s Dymaxion (Wichita) House (1946) resembled a traditional Kyrgyz yurt; a 19th-century portable writing-desk had the same lines as an Apple PowerBook. Didactic material was kept to a minimum; short explanatory texts made little attempt to propound an overarching thesis. The objects themselves held their own. What they shared was a certain elegance (which is, I suppose, a word that describes the aestheticization of the functional).

One particular favourite of mine was an early 20th-century Japanese ‘stair/dresser combo’: a beautiful set of varnished wooden boxes – some of them open-fronted, some with brass-hinged doors – stacked to form a narrow seven-step stairway. The accompanying text explained that ‘in the old fire-prone wooden homes of Japan, quick evacuation was a necessity’. During escape the portable stairs divided into individual chests to serve as luggage for sudden flight. That brief description hinted at something more than simple ingenuity of design. An image – a narrative, really – emerged: a story of contingency and disaster, a family gathering their possessions and running for their lives as a house goes up in flames. There was, perhaps, a suggestion that even the most stable homes are potentially transitory, mobile living less an option than a threat.

Many of the objects on view were similarly resonant, but for the most part they told other sorts of stories. They portrayed the nomadic life as one of luxury and leisure: picnic sets and camping equipment, a Louis Vuitton wardrobe trunk from the 1930s, a samovar from the Orient Express. (Although a bleak-looking Sov-iet-era cupboard bathtub from worker’s housing in East Germany suggested a darker rationale for efficiency in design.) Or they proposed modular living as a form of Utopian experimentalism: from the Modernist systems of Gerrit Rietveld and Charles Eames to 1960s’-era communal crash pads, dwelling was presented as an ever-evolving sort of play. (There were models of the astonishing wall-less houses Shigeru Ban has built for Japanese aesthetes, but no sign of the cardboard-tube shelters he’s designed for victims of natural or man-made disasters.) A film presentation of Alberto Rosselli’s 1972 Expandable Living Container depicted two attractive couples setting up camp in the woods, walking hand in hand and lolling about their immaculate unit. It had the anticipatory feeling of period softcore porn, as if the flexible life of the future promised other sorts of new permutations.

This racy optimism seemed to be the note struck by the show as a whole, which is an appropriate mode for a museum about to begin a new chapter in its history. It was cheerful and inclusive. We all would like to think of ourselves as rootless cosmopolitans, after all. But in speaking more about fantasy than fear, more about the future than the contingencies of the present, the show missed what is most moving about mobility.