In the late 1970s, the streets that gave birth to Punk were a bleak and desolate playground for the imagination 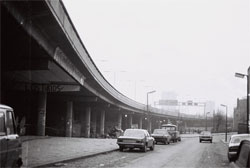 These photos were taken on an old Pentax during January 1977. Their purpose was to serve as an image bank for the second issue of the fanzine London’s Outrage. The location was the square of North Kensington that lies between Holland Park Avenue, the Shepherd’s Bush spur, Westbourne Park Road and the Harrow Road. The bulk of the images come from the streets around Latimer Road and Lancaster Road: the district called Notting Dale.

Here, as in other inner London areas such as W9 (the Chippenham) and WC2 (Covent Garden), the tide of industry and humanity had temporarily receded. Slum housing stock had been demolished, but there was no reconstruction: squatting communities such as Frestonia (based in Notting Dale’s Freston Road) occupied the remaining buildings. Not yet the clichés of Punk iconography, large tower blocks loomed like primitive monsters above the rubble and the corrugated iron.

I visited this area after seeing the Clash and the Sex Pistols. I was very taken with the Clash, partly because their North Kensington neighbourhood was so close to mine. Songs like ‘How Can I Understand the Flies’ and ‘London’s Burning’ (both 1976) reflected their environment with precision and passion. Areas of London were very poor in the late 1970s. The Clash and the Sex Pistols – the guttersnipes and the flowers in the dustbin – spoke of the human cost.

This focus on the forgotten parts of the city was part of the social realism that would soon swallow Punk. There was, however, something futuristic in this desolate landscape. The area that had been cleared a decade earlier to allow the Westway’s serpentine path opened up a gap for imaginative and physical space. By 1976 the ideas contained in J.G. Ballard’s Crash (1973) and High Rise (1975) were like spores in the wind.

Like the dub reggae that saturated parts of west London, early Clash songs such as ‘How Can I Understand the Flies’, with their instrumental drop-outs, incorporated these gaps into their very fabric. The hyper-velocity of the band’s early live shows was, in part, an indication of the energy that came from seeing London’s dereliction as an opportunity: the forgotten city as playground.

These areas are unrecognizable today. There are dwellings, theme pubs, smart media offices, cars, a new leisure centre. This regeneration is better, surely, than the blasted landscape of 30 years ago. But there was a kind of freedom in London’s spaces: before Punk became trapped in mass-media definitions and music industry marketing, it offered a way of envisioning the metropolis anew, of redrawing its mental and physical map, that is now impossible.

Jon Savage is a writer based in North Wales. The revised edition of his book England’s Dreaming: Sex Pistols and Punk Rock is published by Faber and Faber. His compilation of gay records: Queer Noises 1961–78: From the Closet to the Charts is released by Trikont this month.