The screams and roars can be heard even three floors down in the vast space that houses the Kunsthalle Zürich: something dark and menacing is going on upstairs. But the first scenes that the visitor encounters are calm and familiar snippets of domestic life and the quiet concentration of children at play: a boy makes his Playmobil characters fight in a plastic castle; a girl plays dead and then wakes suddenly to pull her friend into her fantasy. The sounds, from Ditch Plains (2013), and the images, from Trailer (My Throat, My Air, 2015), represent the two ends of Loretta Fahrenholz’s first institutional solo exhibition, 3 Frauen (3 Women), in which very different kinds of images conjure up a sense of terrible emptiness as they explore the horrors of disembodiment, domestic and urban disconnection and the disquieting limits of role play and make-believe. 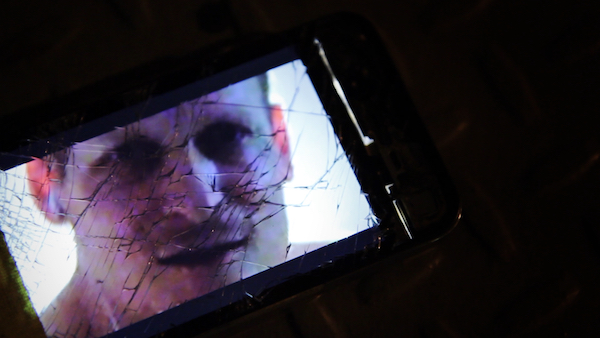 At the side of the monitor on which that first short film is screened hangs Lackierarm (Spray Arm, 2015), a 3D-rendered image of a paint-spraying robot on a car production line. On two walls of the next vast space are displayed Recently Deleted (2015), a series of framed prints of discarded thumbnail images – journeys, ferries, hotels, exhibition openings – all arranged like contact sheets or film stills; outtakes from a narrative that’s told elsewhere, or not at all. This piece has a simple but compelling conceit: here the saved smartphone images are simply gaps, unseen in the arrangement, while those destined for irreversible deletion have been waylaid and rescued for the gallery. A third wall bears a large digital print, Erlebnishof Millers, Kapelle (Miller’s Farm Experience, Chapel, 2015): a pale landscape, an indistinct topography (of a family ‘adventure’ farm in Bavaria). There are two more prints of this sort and scale in the next space: one, Erlebnishof Millers, Musikzimmer (Miller’s Farm Experience, Music Room, 2015) is dark and cavernous; the other, Erlebnishof Millers, Anschirren (Miller Adventure Farm, Harness, 2015) gives an incongruous impression of rural life. Implosion (2011) plays in this room as well, the soundtrack of the film obscured by sonic interference from Ditch Plains, the street dance dystopia playing in the darkened fourth and final space. 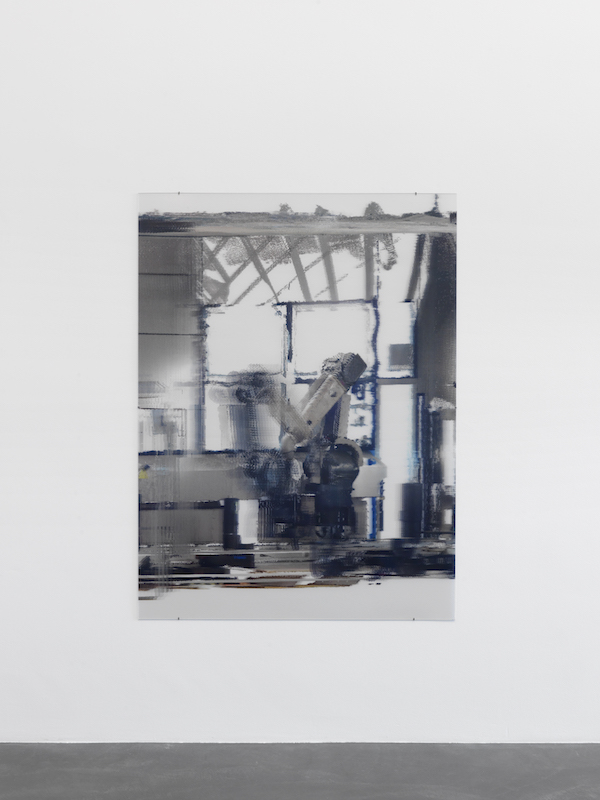 Fahrenholz has been widely praised for Ditch Plains, a thirty-minute film in which a troupe of New York dancers gives a fusion of horror, disaster and sci-fi devices an uneasy kind of half-life on the screen. Bodies jerk and struggle to contain themselves in a manic take on black street life; a hapless hero is continually tormented by a joker apparently animated by whatever has taken the struck the city down: a hurricane, a nuclear accident, perhaps a catastrophic gas that now glows only on the bodies of a chosen few, the neon picking out the detail of their clothes, life glowing only in its outlines, like the lighting of a city at night. A powerful soundtrack evokes Grand Theft Auto, collaging sparse exchanges, machinic howls, and distorted copy stolen from such sources as adverts for Honda and Hennessey and lines from William Blake; bodies slump in doorways and deserted streets; guests at an upmarket dinner party are frozen in their tracks, victims of this sudden interruption to their lives, dead or dormant, sometimes in the limbo of talking heads on shattered smartphone screens. This is a dense impression of a city on the edge, and at its edges: the white bourgeoisie is knocked out, the black street dancers are turned on, but much of the population queues for fuel as though only marginally touched by the catastrophe. 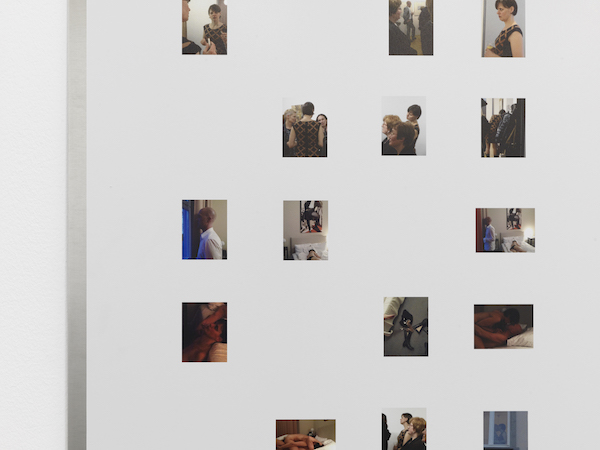 There are edges and outlines all over 3 Frauen: abstracts and extracts, pointers and teasers, highlights and outlines of things that never quite appear. The opening film (edited by artist Hans-Christian Lotz) is a trailer for Fahrenholz’s recent My Throat, My Air, and can only hint at what’s acted out among the genders, generations and races that make up the family of former Fassbinder actor Ulli Lommel and are explored in the film itself. The three enormous Erlebnishof prints result from an image-making process which cannot be divined from the images themselves, but in fact uses 3D spatial scanners of the kind normally deployed by architects and planners to map out a building or measure up a room. The contours are plotted but the dots are never joined; movements are drawn up but unresolved, resulting in ghostly contours and pointillist impressions, trails and traces of scenes rendered indistinct and remote. And the three women in the title of the show: are they Robert Musil’s Drei Frauen, or the (more or less three) women who actually figure in the images, or perhaps a more oblique reference to the uneasy boundaries between artist, role, and actor which are pushed and explored in many of these works? 3 Frauen is in fact named after Robert Altman’s trippy dream of a film from 1977 in which two women spiral in on a third in a series of doublings and dislocations, taking on each others’ roles in a story shot through with manipulations and possessions, twinnings, pairings and reflective surfaces. The exhibition certainly picks up on the unsettling flavour of the film, but otherwise the reference seems too remote to work; the film, and the women, are here in name alone. 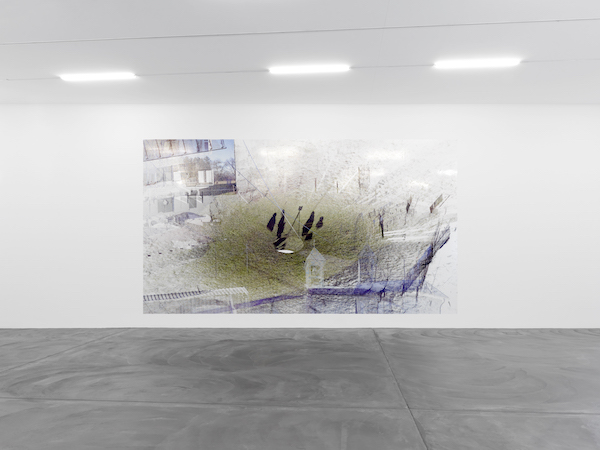 The sense that things are happening at more than one remove comes to a head in Implosion, a film adaptation of a Kathy Acker play. Even as a script, Acker’s collision of characters from the French Revolution and dialogue from New York’s ’80s underground makes for a jarring text; reinscribed against the high-rise backdrop of a flattened, disaffected, networked world, the effect odder still. In Fahrenholz’s film, the play is less performed than mechanically intoned, and a disconcerting mismatch of genders and generations gives the film an hypnotic sense of estrangement that takes Brechtian strategies of alienation to disturbing heights. The contrast with the later Ditch Plains is stark: the lighting is harsh, the actors are white, the music reminiscent of porn groove.

Implosion, Ditch Plains and Fahrenholz’s other quasi-documentaries are directed with an uneasy mix of collaboration and manipulation, which conjures up a feeling of remote control also invoked by the spray-painting arm and suggested by many of the still and moving images. Both their themes and their techniques work to a feeling of distancing and detachment. All exhibiting is a matter of selection and removal, extractions from the body of an artist’s work: an element of this, a trailer for that, an example of the other, promises and hints, tips of the icebergs of interests and intentions, ambitions and desires that inform the work on show. 3 Frauen takes this process as its theme, and to extremes: as Recently Deleted demonstrates, abstraction and subtraction are its means and ends. There’s no way back to what’s been left behind: the concern is not to dwell on the emptiness, but rather to see what can emerge from the play of outlines and tracings that are made. But some of the trails left by these images are so faint and indistinct that the whole exhibition can begin to feel too much like a trailer for some forthcoming work, or perhaps simply for itself.