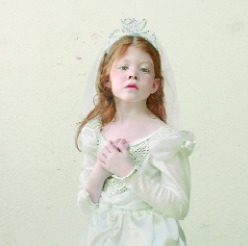 In the 1930s the New York street photographer Helen Levitt began shooting riveting images of feral urchins, interacting with all the intensity of adults. Although these are among her most compelling pictures, Levitt has always professed to have no special feeling for children, which no doubt helps to account for the work's stark, needling force. The young painter-turned-photographer Loretta Lux has also made similar remarks regarding her own images of children. Although Lux's unsentimental attitude to her subject (or even lack of maternal instincts, according to one interview) allies her to artists such as Levitt, at first glance these cool pastel-soaked photographs suggest a radically different motivation. Reminiscent of Victoriana, cloying greetings card illustrations, Margaret Keane's saucer-eyed waifs, department store studio portraits, Japanese anime and children's clothing catalogues, her portraits and eerie scenes demand deeper scrutiny through their profound strangeness and submerged hints of psychological unease.

Lux concocts these smooth, faintly toxic confections by digitally combining and altering photographs of her friends' children with shots of various locations and her own painted backgrounds. To a certain extent these static and highly formal compositions reflect her enthusiasm for Old Master paintings, magically echoing the simplest and most stylized single-figure Renaissance images, colouring them with Tiepolo ceruleans or the turquoise and pinks of frescoes. She cites as influences Agnolo Bronzino, Diego Velázquez, Francisco de Goya and Philipp Otto Runge. Among these, Runge is perhaps the most obvious source, with his enthusiasm for fairy tales and demented-looking cherubs. Bronzino's stamp is also evident, since Lux's kids are all as deathly pale as their poses are mannered; their pallor seems almost at one with the rarefied world they inhabit, as if they are somehow defined by their skin. Could there be a weirder hybrid than that between pencil-box kitsch, Romantic genre painting and the chilly, marmoreal flesh displayed by the court notables, cupids and goddesses depicted in Bronzino's sleekly fey Mannerist works?

Lux decks her models out in vintage clothing, thus heightening the photographs' sense of staginess. In one of the show's most striking images,The Blue Dress (2001), a sombre young brunette stands with her arms thrown out behind her. The girl's dress, which has a lace-up collar reminiscent of Renaissance clothing, picks up the pale turquoise hue of the balconies that embellish a strip of Modernist buildings on the horizon, while her celery-coloured sweater complements the oddly greenish sky and sandy ground. This work especially reflects the other dominant influence at work, namely the German photography tradition extending from August Sander to Bernd and Hilla Becher and Thomas Ruff. Lux was born and educated in Germany and seems to have absorbed from this tradition the sense that only surface and circumstance can be rendered through photography, and that she cannot represent her subjects' interior lives. The apparently manipulated colours of the faceless architecture in the distance feel like another nod to recent German photography.

Despite the apparent neutrality of The Blue Dress and other images, one also senses an undertow of dark fantasy, an element most potent when it lurks unseen. In Hidden Rooms 1 (2001) and Hidden Rooms 2 (2002) a closer look reveals shards of broken glass littering the floor, while in Study of a Boy 1 and Study of a Boy 2 (both 2002) a ghostly street scene with a little medieval tower and tiny woman pushing a miniature baby carriage appears to be incised on a mottled wall. These are perhaps red herrings: Lux's pale and impassive children, with their peculiar costumes and poses, are creepy enough.

A couple of memorable works also draw on Balthus' magnificently prurient canvases of young girls, but Lux has watered down his dynamic compositions by centring the figures in the insipid manner of department store portraits. The Wanderer (2003), for example, shows a girl similar to one in Balthus' The Mountain (1937), lying asleep next to her backpack in a mountainous landscape. As bland as it is lovely, The Wanderer feels like a transitional work.
At times Lux's images call to mind the discomfiting photographs of young girls taken by Charles Dodgson (Lewis Carroll), but thankfully she allows her subjects their isolation and, one assumes, their own sexuality, hidden deep beneath the work's milky surfaces.