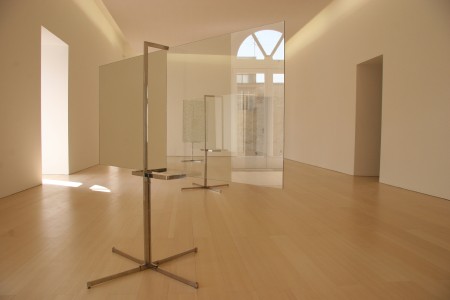 The word ‘Ricomincerò!’ (I will start again) was poignantly inscribed at the entrance to ‘Luciano Fabro: Didactica magna, Minima moralia’. Punctuating the end of an energetic, manifesto-like statement by the artist railing against the ‘reduction of the work to the status of an advertising gimmick’, this personal call to arms could not help but be read as Fabro’s unintentional last will and testament in the wake of his death in June 2007, during preparations for the exhibition. These potent last words revealed an undiminished ethical stance toward the value of a work of art: a stance that fuelled the artist’s creation of a remarkable oeuvre spanning almost six decades. Inevitably, Fabro’s untimely death burdened this exhibition with expectations of a broad and exhaustive survey, yet his adamant desire to focus solely on early works produced between 1963 and 1968 was fully acknowledged by curators Rudi Fuchs, Eduardo Cicelyn and Silvia Fabro, the artist’s daughter, who realized this coolly austere exhibition according to Fabro’s detailed notes and plans.

The exhibition’s cut-off date somewhat pointedly marked the moment Fabro became associated with the Arte Povera movement, which reflected a period of intense social and political change in Italy, characterized by strong anti-war sentiment, scepticism of new technology and a growing hatred of the rampant ‘Americanization’ of culture. Arte Povera embodied an art of protest, an art which, wrote Germano Celant in Arte Povera in 1967, consisted in ‘taking away, eliminating, downgrading things to a minimum, impoverishing signs to reduce them to archetypes’.

While some of Fabro’s first (and perhaps best-known) works encapsulated these characteristics – particularly a series of sculptural reliefs, fabricated in gold, glass, leather and other basic materials, bearing an inverted silhouette of the Italian peninsula – these earlier pieces displayed a narrative restraint and formal simplicity that waned in later works; Fabro’s predominant interests with these works were the framing of space, the phenomenological encounter between the constructed space of the work and the pre-existing space of the gallery, subjective forms of measurement, and the relationship between linguistic exposition and formal representation.

Each room in the exhibition’s chronological sequence was deftly installed with one or two works. Each sculpture, made predominantly from steel and glass and employing fundamental geometric forms, revealed Fabro’s rigorous and quasi-scientific approach, unfolding in gestures that obliquely resemble the stylized diagrams found in scientific textbooks. Works such as Asta (Pole, 1965–6), a suspended piece of metal that almost imperceptibly drifts off its perpendicular axis, or Ruota (Wheel, 1964), a metal hoop seemingly balanced on the end of a pole whose length corresponds to the hoop’s circumference, function as neat sketches of simple equations construed from what might have been a curious scribble in the artist’s sketchbook. The translation of ideas was the recurrent leitmotif in these works, revealing Fabro’s affinity for art in which structure and meaning are evidently manifest. The pedagogical tenor of the exhibition (loudly proclaimed in the title) was further emphasized by the accompanying wall texts, which flitted between description and poetic exegesis. Mezzo specchiato mezzo trasparente (Half Mirrored Half Transparent, 1965) was described as: ‘A sheet of glass – half mirrored and half transparent – which forces the eye to move continuously from one side to the other, inviting the viewer to measure oneself against the spaces of reflection: what one sees beyond and what comes forward.’ If these didactic interjections made the works seem illustrative at times, their channelling of Fabro’s voice nonetheless provided a welcome injection of personal insight into a miasma of tautological meanderings.

Some of the later pieces in the show afforded a breath of fresh air. In them Fabro tempered his phenomenological concerns with a more human dimension, resulting in pared-down allegories of work and protection that tacitly reflected the precariousness of human life at a time of escalating political crises in Italy. In cubo (In Cube, 1966), a wooden frame cube covered in white fabric that can be lifted to allow the viewer to enter, provides an isolated environment that prompts musings on one’s self in space as well as offers a haven of shelter and escape. Also from 1966 are a series of delicate, tailor-made garments designed to protect and support intimate parts of the body: Posaseni (Breast Rest), consisting of two breast supports that can be attached to a wall to create a temporary resting place, and Bandoliera (Bandolier), a strap to support the penis, are admittedly whimsical gestures, but their playful humour, expediency and focus on the value of human experience exemplify the prelapsarian moment of non-commercial bliss to which Fabro was so eager to return.