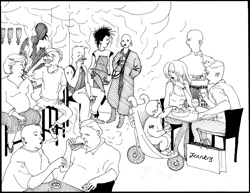 Lucy McKenzie’s touring solo exhibition ‘Ten Years of Robotic Mayhem (including sublet)’ comprises the following. Firstly, the title, taken – I assume – from a video of the same name by West Coast performance group Survival Research Laboratories. Then, a series of framed Hergé-influenced illustrations McKenzie made for the Edinburgh periodical One O’Clock Gun and an Alasdair Gray-esque map she created detailing the locations of outdoor sculpture in Dumfries and Galloway, Scotland; a reproduction Charles Rennie MacKintosh chair, and three large paintings after MacKintosh and Belgian Art Nouveau designers Georges Hobé and Paul Hankar. There are also collages of Slovenian band Laibach, the artwork she designed for Erasure’s Union Street album, and the releases on her own record label Decemberism – the compilation Nova Popularna, Bonnie Camplin’s excellent Heavy Epic (cover by Enrico David) and a spoken-word Alasdair Gray LP (distinctive sleeve art by the writer and artist himself). Last but not least, there is the ‘sublet’ – a small booth displaying clothes for sale by designer Becca Lipscombe, and photographs of McKenzie modeling the apparel.

McKenzie’s dexterous draftsmanship and punchy graphic sense has enabled her to develop a distinctive style; a kind of updated Jugendstil figuration spliced with a neo-New Romantic nostalgia, and a fatal attraction to rather self-consciously impeccable cultural reference points. Appropriation is the engine driving her work; less, however, specific images, than a coralling of stylistic licks and moods. Over the past seven years or so, along with the aforementioned examples, she has borrowed from Socialist Realism, Bauhaus, Polish Modernism, Viennese Secessionists, Scottish Muralists, Belgian record label Les Disques du Crepuscule, German record label Brain Records, Brian Eno and Depeche Mode.

Inasmuch as the weight of these lifts is in their socio-cultural significance, McKenzie’s work could be read as a hyper-acceleration of ‘Pictures’-era (the show curated by Douglas Crimp at Artists Space, New York, 1977), or Context Art appropriation strategies. The reality isn’t quite so academically neat. In a recent issue of Untitled magazine, Mick Peter suggested that, in depicting her artist friends, McKenzie seems to long for some kind of internationalist ‘league of the arts’; a life spent sitting in Brussels cafés, chatting about Slovenian Conceptualism or Dutch design whilst listening to hip Scottish bands. With its multi-disclipinary emphases, this exhibition (which originated at Talbot Rice Gallery, Edinburgh, and moves from Norwich to Arnolfini in Bristol, and finally San Francisco Museum of Modern Art) is indicative of this longing. In a sense, McKenzie’s processes parallel the ways in which subcultures construct their image, forming alliances with like-minds, and excluding those they define themselves against. It’s as if someone were to take Dick Hebdige’s 1979 sociological study Subculture: The Meaning of Style and apply its findings to art; Hebdige’s mapping of Antonio Gramsci’s theories of ‘conjuncture’ onto youth culture – forging identity and ‘social autonomy’ from the detritus of culture available to you.

For all of McKenzie’s savvy, I wonder what it is she is trying to communicate. If appropriation is about a reshuffling of image hierarchies and by extension an investigation of power and control, then McKenzie’s relationship to her references takes on more troubling aspects – it is difficult to escape from the fact that she places herself and her peer group at the centre of her referential nexus. The power of McKenzie’s source material serves to aggrandize her own intellectual pedigree. Whether it’s Laibach or Art Nouveau, each is co-opted into her self-image as a pan-European cultural operator. Is this a question of ‘open source’ art production, dilletantism, or cynical proximity to cultural capital? Perhaps what is more pertinent to consider is what is the intellectual return for the viewer from McKenzie’s matrix of influences?

The most interesting works here were the drawings illustrating One O’Clock Gun's articles on cultural instrumentalization and gentrification in Scotland. An elegant depiction of grizzled Glaswegian writer James Kelman sat in a bar next to Franz Ferdinand singer Alex Kapranos succinctly conveys the coarse rub of old versus new cultural attitude. Another image depicts the simmering class divisions an issue such as a smoking ban might compound – working class pub habitués and chicly retro punk girls enjoy a thick cloud of cigarette smoke whilst an upwardly mobile middle class family scowl across the room at them. These drawings, like One O’Clock Gun itself, address the complexities of why ‘culture’ should never be regarded as a cure-all panacea for a country’s ills. This localized purpose better serves McKenzie’s romanticized visions of collaboration than her borrowings.