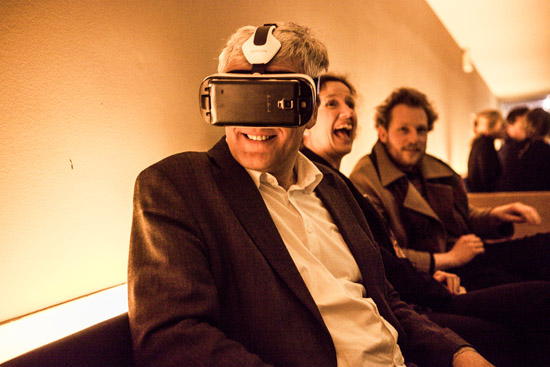 The internet has been hailed as a solution to all kinds of perennial problems: blogs will rectify the corporate consolidation of the press; Bitcoin will solve currency manipulation and rampant corruption in financial markets; social media will ameliorate deficits in the democratic process. But the digital economy also entails a shift from a regulated to an unregulated system, which replaces formal benefits – like salaries, pensions and social safety nets – with ‘likes’ and a barter economy, whilst the global circulation of images and commodities goes hand in hand with increasing partitions in the social sphere: segregation, antagonism, and social and economic inequality.

On 20 and 21 March, the HKW in Berlin hosted a symposium on the relation between art and the internet. Clustered around two keynote lectures, five panels addressed themes as broad as ‘Medium’, ‘Society’ and ‘Life,’ in an event curated by Melanie Bühler in collaboration with the Goethe Institute, as the concluding discussion of the series Lunch Bytes – Thinking About Art and Digital Culture, which took place around seven European cities during 2014. 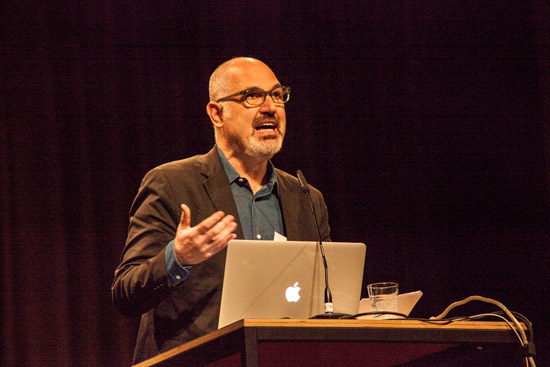 The conference commenced on Friday evening with the lecture ‘Dark Cloud: Shapes of Information’, by David Joselit. In this first keynote, Joselit contrasted the vectors of global circulation – and the boundless space conjured by the metaphor of ‘the cloud’ – to the physical confinement of Edward Snowden in a cramped Hong Kong hotel room (as documented in Laura Poitras’s 2014 film CitizenFour). But whereas Joselit was attempting to map the zones of friction between virtual and political geographies, in almost all the artistic positions represented, the ‘global’ appeared as an image – literally as the horizon of the Earth’s curvature – rather than as a reflection on the cultural logic of digital circulation.

Up until now, the critical reception surrounding what became known as the ‘post-internet’ condition has simply conflated cultural and technological novelty. While there is a broad consensus that the ‘digital turn’ had a wide social impact, its precise nature and contours are far from clear. 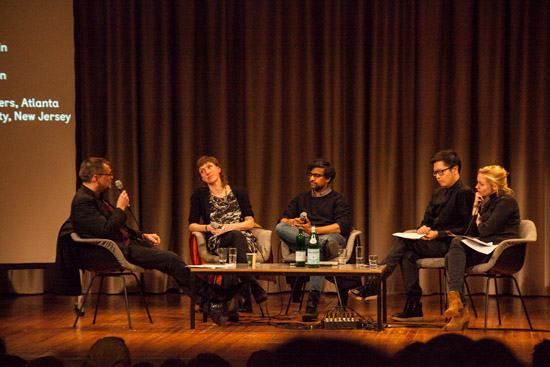 As Diedrich Diederichsen noted in the panel ‘Structures and Textures’, the transition from analogue to digital media is an aesthetic rather than an ontological problem. Rather than a departure from naturalism, what the digital domain introduced is an ‘aesthetics of affectivity’ coupled with a mobilization of nature at the service of a human agenda – a common theme in romanticism, which gained a new lease of life with the introduction of animated, and often times endearing, interfaces. This ‘vulgar Latourian fairy-tale’ – which is about to be intensified by the introduction of the IoT (Internet of Things) – that we call ‘third nature’ can also be seen as reified history, whilst what appears as the medium’s phenomenology can also be seen as allegory. In the same panel, Kerstin Stakemeier argued the post-media condition entails a recovery of ontology, and an infinite present-tense temporality, in which all artistic practices are aestheticized up-front – as Stakemeier noted one could perhaps see a continuity between capital’s emancipation from labour (under financialization) and aesthetics’ divorce from ‘art.’ Representing nature as spectacle and the biosphere as totality, post-net art shares with speculative aesthetics the notion that the world is code, materiality emerging as a secondary aspect only. 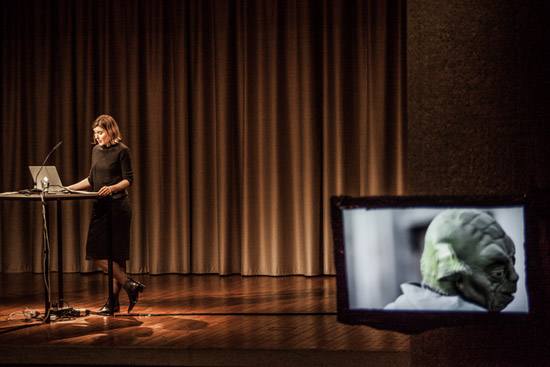 In the second keynote address, on Saturday, ‘What Was Pre-Post-Internet? Why Net Art and Cybernetics Are Forgotten’, writer and Afterall journal editor Melissa Gronlund noted that the ‘post-net condition’ seems to profess a form of cultural amnesia, cutting itself off from historical referents. Instead of building on the legacies of institutional critique, net art, or relational aesthetics – obvious historical precedents for many of the artists present on the conference – post-internet practices seem to operate in a historical void, as if the introduction of the internet would introduce an outright break with history. Artist Paul Kneale referred to this condition as a general ‘mental shift’, but as curator Maria Lind observed, this claim is hard to reconcile with the fact that post-net artists generally seem to hail from NATO or Commonwealth countries (excepting those south European countries afflicted by the debt crisis). It would rather seem that a political contingency (the consolidation of neo-liberalism after the fall of the Soviet bloc) is being portrayed as a historical necessity, and that the ‘condition’ ascribed to the pervasiveness of digital communications is rather the subjective effect of a socio-economic disposition. 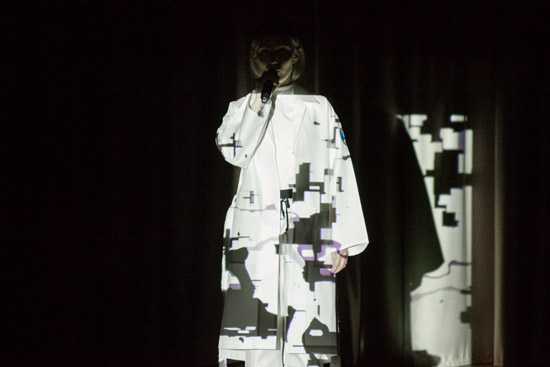 Gronlund went on to note that, whereas Net Art in the ’90s was interested in creating events or images to be set in circulation, as artistic experiments, post-internet art is not invested in the circulation of images but in their fixation – as private property, or as claims of ownership. In the panel on ‘Life’, artist Jesse Darling also objected to the artificial hierarchy erected between ‘dumb’ users (the digital’s brute force) and media-savvy artists (a form of digital gentry) which presides over the privatization of collectively generated resources. The most striking difference however, is that unlike its predecessors, post-net artists ––or at least the ones who have been readily institutionalized – seem inclined to pictorialize everything – a market-friendly trait that Gronlund and Lind believe explains its traction. 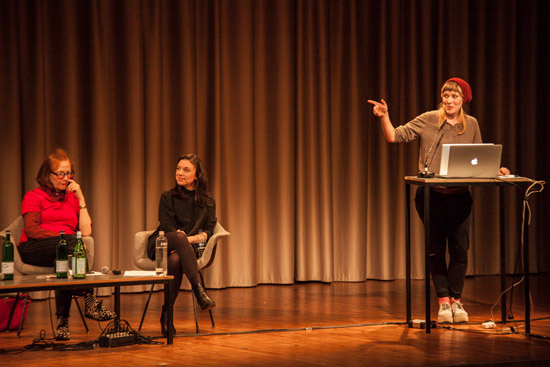 As art historian Philipp Ekardt suggested from the audience, it would be perhaps productive to refer to post-net art as a style, rather than as a ‘condition:’ a conflation of Warholian currency (appropriation, debasement, iconophilia) with symbolist themes and tropes (liquidity, over-humanization of nature, existential ennui, esoterism, disafection). Rather than the inaugural moment of the third millennium, post-net art could be construed as the closing chapter of 20th century art. But to sum up, paraphrasing Hito Steyerl, questions of periodization are much less interesting than questions of violence and power – CitizenFour for instance, is no less relevant for having made use of the traditional tools of documentary film. 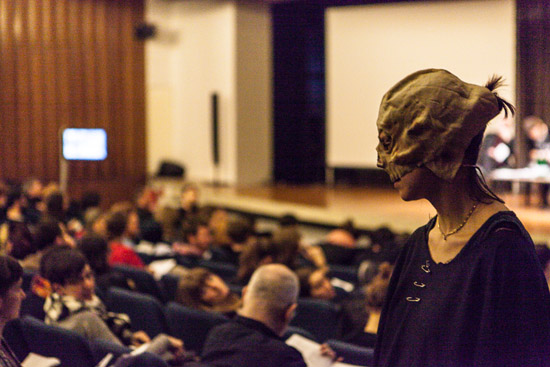 All things considered, the internet as we know it will likely disappear before its effects can be fully understood: by 2020 there will be nearly 26 billion devices on the Internet of Things dissolving the web into a wider convergence of computation and biology. Whether this will bring about a ‘technological singularity’ or result in a digital theme park is yet unclear, either way the complexities of the social will always resist being reduced to simple formulaic clarity.

Ana Teixeira Pinto is a writer from Lisbon who lives in Berlin. She is currently finishing her PhD at Humboldt University, and is a regular contributor to frieze d/e, Art Agenda and Mousse, among other publications.