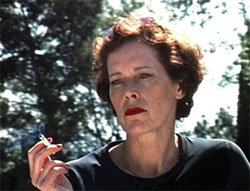 What does memory look like? Not one specific memory, but memory itself? Manon de Boer records people in the act of remembering their past experiences, their own words or memories of others’ words. The resulting films and sound-pieces sometimes testify not to the strength of memory but rather to its flexibility. The Alpha and Omega Project (2001) is an audio recording of a singer trying to recall a conversation between two actresses featured in de Boer’s earlier works. The result is a hesitating, fragmentary poem, like the utterances of someone who has taken a sedative while trying to remember a nursery rhyme. Struggling to recite the original conversation about Los Angeles, she dreamily intones, ‘I always remember, the light was very bright’. The words leave us with a series of dissolving impressions that only occasionally come into focus.

De Boer repeatedly recasts her subjects or reworks earlier conversations or material. Sylvia Kristel – Paris (2003) begins with the revelation that the work consists of two monologues recorded one year apart. In both versions the former star of the Emmanuelle films recalls her life in Paris, beginning with her first visit as an impressionable aspiring actress. Her memories flutter among addresses, former roles, husbands and love affairs. Regrets are raised and then dismissed; at one point she muses, ‘I was wondering why my stories always seem to lack depth […] From one bloke to another, from film to film. I never comment on the architecture, or the beauty of Paris ...’ Views of the city accompany Kristel’s narration: office buildings, Chinese restaurants, tourist buses and main roads. This is Paris seen through a local’s eyes, as absent of its fabled beauty, light or landmarks as it is in Kristel’s descriptions.

In Resonating Surfaces (2005), another portrait of a city constructed through a woman’s recollections, São Paulo appears through a similarly subdued lens, which wanders across streets and over rooftops. This time the narrator is Suely Rolnik, a former student of Félix Guattari and a lover of Gilles Deleuze who left her native São Paulo for Paris after being imprisoned as a dissident. Although her recollections are more analytical than Kristel’s, Rolnik also describes a former version of herself like a role she once played. The film’s introductory title reads ‘Suely Rolnik – Voice’, as if the narration could be as detached as the reading of a script. As in Sylvia Kristel, de Boer films her subject only in silence; occasionally we see Rolnik engaged in a conversation we can’t hear; instead, we’re left with footage of São Paulo’s high-rises, resembling wobbly constructions made of scraps of paper, as though they’ve been submerged in a filthy puddle, then pulled back out. ‘Colour of São Paulo? Grey’, declares the voice-over.

By their own accounts Kristel and Rolnik describe the ways that others, especially men, have framed their self-perceptions – one sexually (as a mannequin – the French word for model) and the other intellectually (as a subject of psychoanalysis). Kristel recalls ‘immediately falling in love’ or ‘being seduced’ by Paris, Hollywood, her directors and her co-stars. Men are repeatedly described as ‘charming’. She says of one former lover, ‘He treated me like someone who didn’t know anything, and that fascinated me.’ In Resonating Surfaces we see how Deleuze contributed to Rolnik’s development as a writer: ‘I was in love with his thinking. Going to his classes made me feel strong […] I was only 22, and I idealized him completely.’ Between these two portraits emerges a study of the possible ways that experiences can define us. Are we impressionable enough to let them mould us, like forms out of clay? Or do we reflect our experiences like mirrored surfaces, projecting multiple facets of ourselves?

Rather than suggesting that her subjects are permanently indelible forms or mere reflective surfaces, de Boer lets their identities emerge like photographs in a dark-room, developing over the course of their recollections – exposing some areas and hiding others, until their surfaces reveal as much as they conceal. Both women, having passed through their experiences, can describe them with self-awareness, even detachment. Through intermittent images of her subjects de Boer reminds us that they are still intact; they can deflect even the most traumatic experiences. In Sylvia Kristel we see the actress smoking a cigarette, wearing red lipstick, looking into the distance with a carved, almost masculine face. This strong but brittle woman could be Kristel the actress or Kristel herself between takes in a film. Likewise we see Rolnik sitting outdoors in a floral dress, smoking contemplatively. Seeing these two women acting out their remembrances, we’re aware that these portraits are just glancing illuminations of their characters and memories. The visible or audible form of those memories can only attempt to access their origin – something that is supple, refractory and floating.