Forty and Forty… with Manfred Pernice and Klara Lidén

It’s not every day that you come across the term ‘free range canary’. Referring to the birds flitting about Marc Camille Chaimowicz’s show at Galerie Neu during Berlin Art Week, these canaries were the talk of the town. In a range of colours from tangerine to neon yellow to muddy brown, the birds at times took refuge in the pastel-coloured ceramic vases installed on small shelves across the walls. A sheer-white curtain, creating the kind of hermetic environment for which Chaimowicz is best known, enclosed them in the space. Chaimowicz commissioned the vases from Bottega Gatti in Faenza, a ceramics studio founded in 1928 that often collaborates with artists. Wooden t-shaped, pedestal-cum-shelves – some left untreated, some painted white – punctuated the walls in no discernable order, and were topped with one of Chaimowicz’s 40 commissioned vases or an occasional spray of millet. The back wall painted green supported Untitled (bird housing) (2014) by the Swedish artist Klara Lidén, a simple birdhouse made from a wooden plank meant to mimic the modularity of the neighborhood’s low-cost Plattenbau housing. Nearby Stairs (2014), a skinny ladder propped against a wall recalled the ladder reaching to the moon in William Blake’s famous 1793 etching I Want! I Want! The gallery floor was bare save for bowls of water, bird food and two metal bike racks – one triangular, one shaped like a Nissen hut, chained together in the centre – covered in nervous canaries. Titled Parkstücke (2010) the bike racks are works by artist Manfred Pernice. 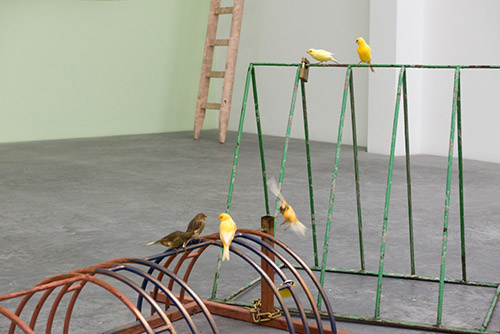 Chaimowicz’s decades-old practice remains elusive. Since the 1970s his work has ranged from sculpture and performance to the applied arts of wallpaper and furniture design. That the exhibition itself was ambiguous could be measured by its press release’s fumbling reference to topics of interiority and ‘interpersonal communications’. The theme of interiority made sense given Chaimowicz’s proclivity for domestic space (take for example, his imaginary version of Jean Cocteau’s bedroom (Jean Cocteau…, 2003–14) as well as the vases included here. But if ‘interpersonal communication’ was present, it was lost in translation, even with the use of the vocal live animals within the exhibition space. 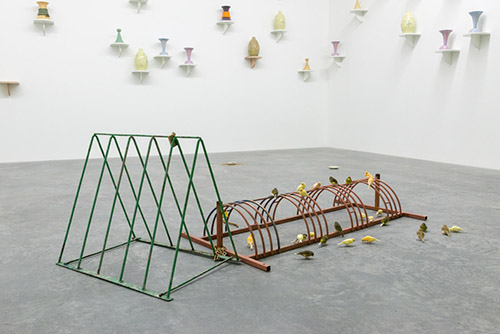 What Chaimowicz’s installation did achieve was the construction of a sensitively hewn environment for us to ponder where our most personal thoughts are articulated. For me, the canaries became a metaphor for the apprehensive city-ravaged human body, peripatetically searching for mental and physical cover. Pernice’s Parkstücke took on an architectural appearance – gargantuan steel ribcages desiccated by the urban sun. It helps that canary shit looks like pigeon shit. The bird’s poop and Pernice’s steel, in addition to Lidén’s Communist-style bird-house, helped Chaimowicz’s majolica ceramics, mint green wall paint and toy-like ladder seem less twee. And given the artist’s fondness for all things cute and 19th century bourgeois, the exhibition rides the line of being much too twee. While Chaimowicz’s pensive show provided a place to consider our own exhaustion and psychological trappings in both interior and exterior lived environments, it was nevertheless slightly enervating to do so in such a politely aestheticized atmosphere – especially against the backdrop of the city’s rapid gentrification. 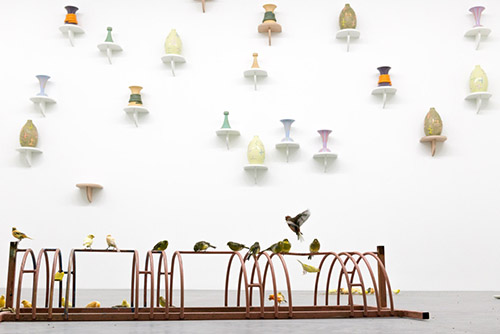 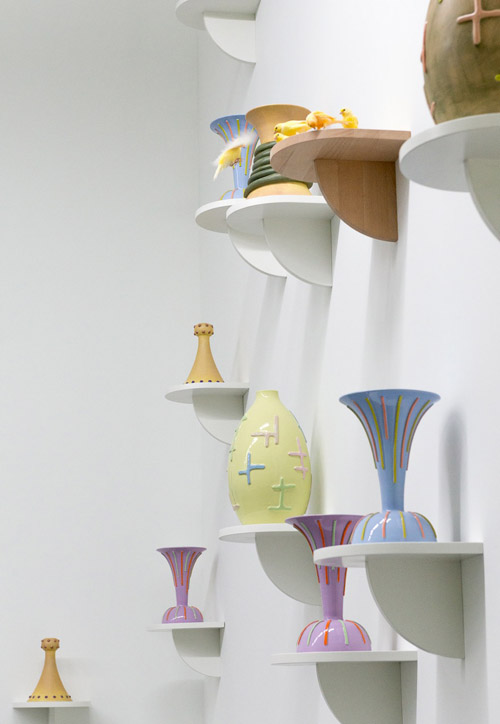 Karen Archey is an art critic and Curator of Contemporary Art, Time-based Media at the Stedelijk Museum Amsterdam.