Mark Fisher and The Work of Mourning: A Visual Essay by Tony Cokes

On a hot day in May last year, I went to see Tony Cokes’s exhibition at Greene Naftali in New York. Power had just gone out in the building; the show was momentarily on hiatus. I had to wait until the next month, in Berlin, to encounter Cokes’s works for the first time. In an electric, club-like underground room at the Berlin Biennale, his audio-visual environments bounced with pop music and sharp, sampled social commentary. I picked up on the irony of my earlier miss in Chelsea: the (temporarily) non-viewable show had been titled ‘On Non-Visibility’. Cokes’s works are often examinations of power, as an electro-temporal rate of flow (as in voltage) and as political mobilization (as in crowds). His works ask: what happens when power is off, and when it gets flipped on again?

For decades, Cokes’s video works have addressed the formation of groups, media events, institutional power, state terror, cultural production, club culture, recent art criticism and theory as well as the representation of race and gender. Uniquely, they achieve this as much by what they don’t show as what they do. His videos, which often employ rhythmic, slideshow-like text on an opaque colour background, toe a line between visual restraint and iconicity. They also often draw from the richly intertextual and connective effects of music, repurposing pop group Oasis or electronic duo Modeselektor or eclectic polymath Mocky. (In one chilling piece, Cokes employs songs with documented use within US torture programmes.) For a key early work, Black Celebration (1988), Cokes juxtaposed black and white newsreel footage of urban riots in US cities in 1965 with samples from a situationist text by Guy Debord and music by industrial group Skinny Puppy (the title is Depeche Mode). Cokes’s ‘Evil’ series (2001–12) – sampled from George W. Bush’s speeches during the US war on terror, an interview (‘On Evil’) with philosopher Alain Badiou as well as, aurally, a range of pop and electronic music. What amounts is a sequence of pointed case studies surrounding the media construction of political terror. As in today’s increasingly vertiginous news streams and algorithmic talking heads, in Cokes’s works we often cannot rely on the eye to reinforce the ear. What we see deliberately contradicts what we hear.

Cokes repeatedly asks what is left out when we make an image of – or brand – a movement, a cause, an event. His richly encoded, deftly mixed works are too groovy, too affective, to be reduced to iconoclasm. But in their discursive precision, he displays an acute sensitivity and a scepticism towards images’ power to connect, alienate, silence, empower and even exclude. I would go so far as to term Cokes’s practice ‘post-representational’ – a relief, in our age of simple representations and reductive identitarianism. You could call Cokes’s post-conceptual works appropriative, but I prefer the dusty rhetorical term prosopopeia. In Greek, this means to ‘put a face on’; to speak as someone who isn’t you, as a kind of channeling, drag or possession.

To possess is to have; to be possessed, to invoke the missing. Cokes’s Testament A (mf fka k-p x ke rip) (2019), commissioned by frieze, is a study of the labour of mourning.  The setting is the memorial talk given at Goldsmiths in 2018 by the writer and artist Kodwo Eshun one year after the untimely death of his friend and colleague, the cultural theorist Mark Fisher. When finalizing this work, Cokes sent me a quotation from Jacques Derrida’s book Specters of Marx (1993), an investigation into the ghosts of Marxism: ‘Mourning always follows a trauma. I have tried to show elsewhere that the work of mourning is not one kind of work among others. It is work itself, work in general, the trait by means of which one ought perhaps to reconsider the very topic of production.’

Work, production, mourning; super-added to our exchange was the recent passing of the curator Okwui Enwezor, among too many other great figures within the arts and music. Memories, testaments and refracted histories all orbit around the ultimate unplugging: death. Ultimately omnipresent and non-visible, this is the inevitable line that Cokes draws between ‘here / today’ and ‘for those of us that cannot be here’. 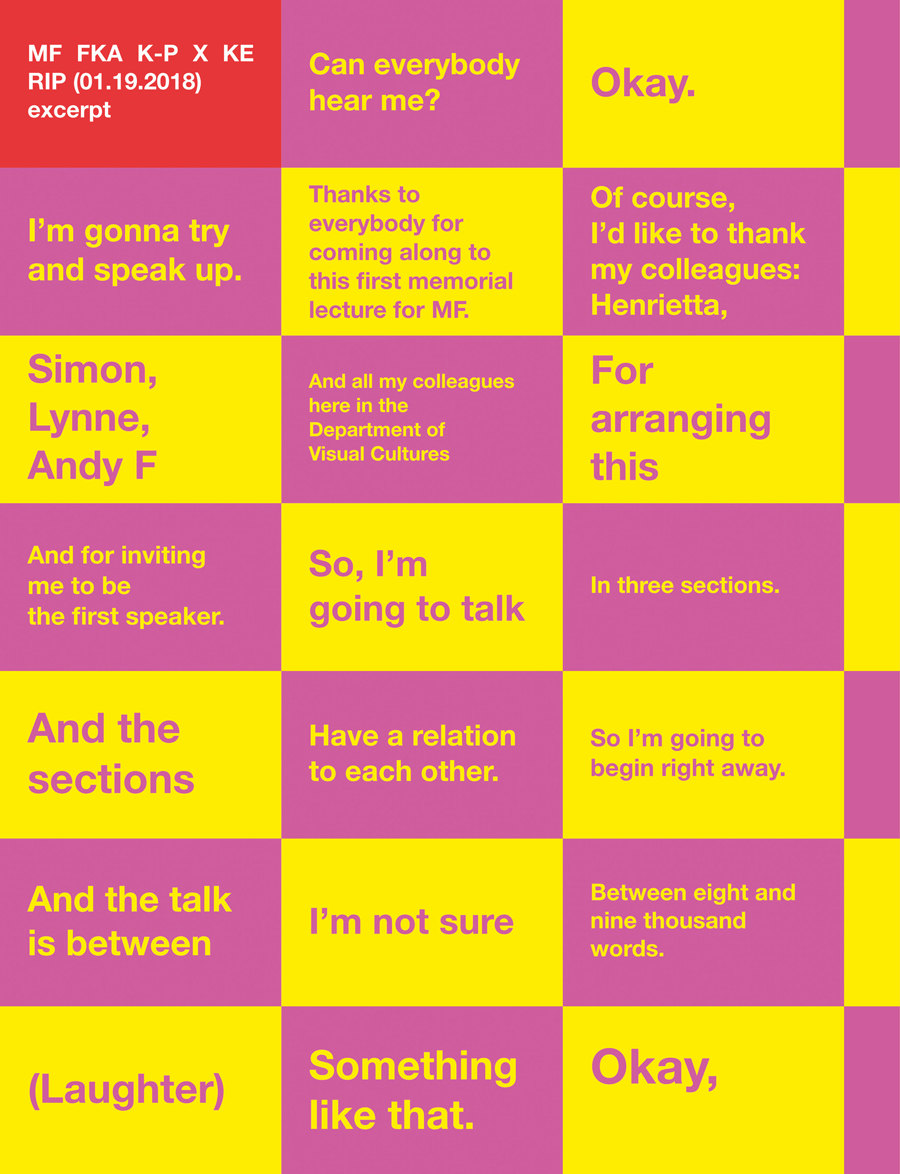 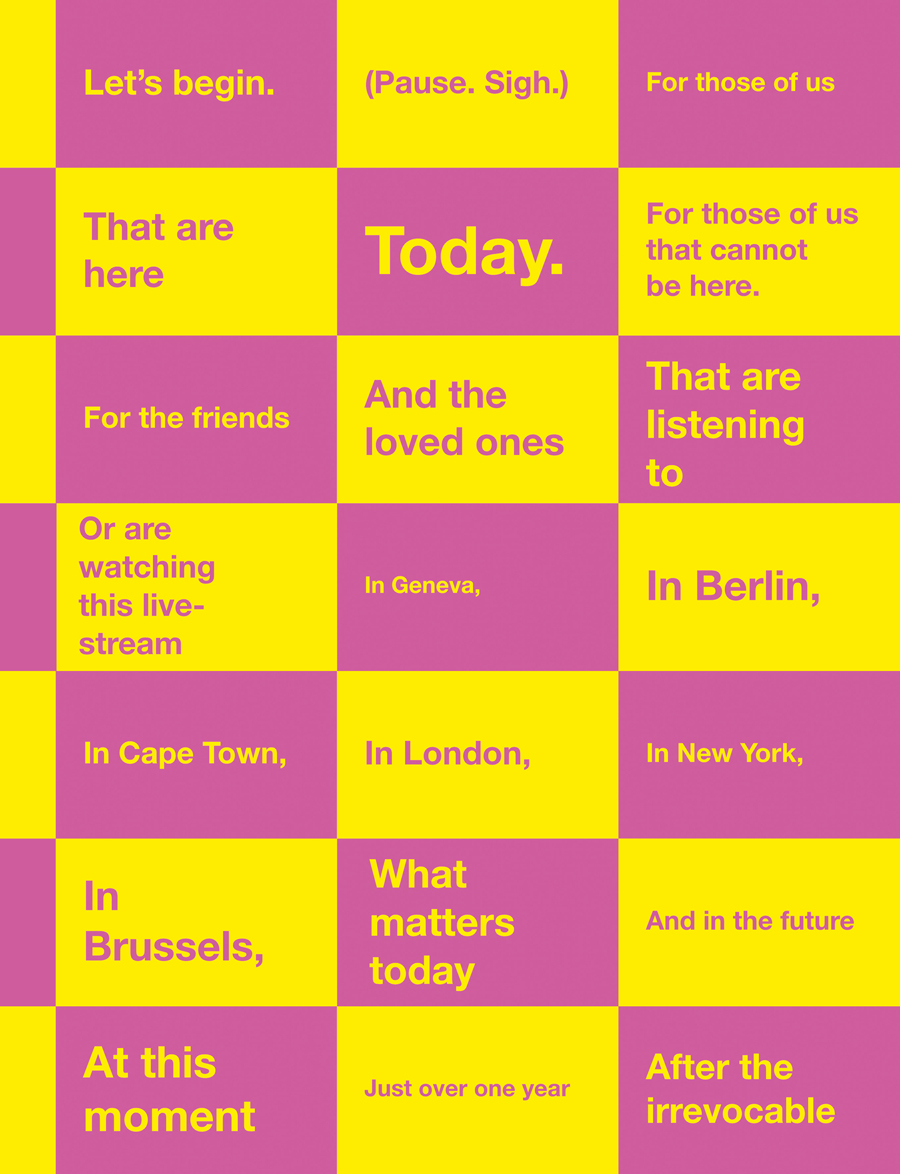 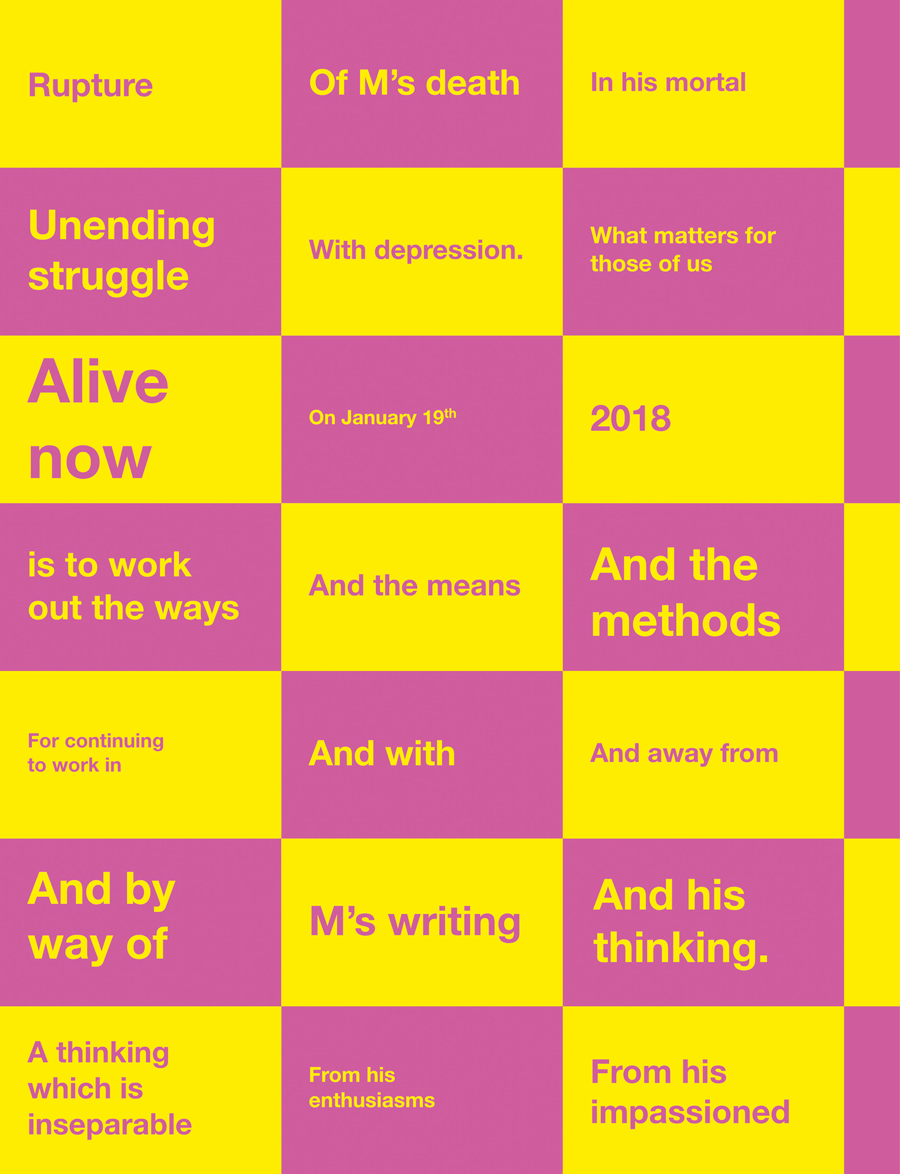 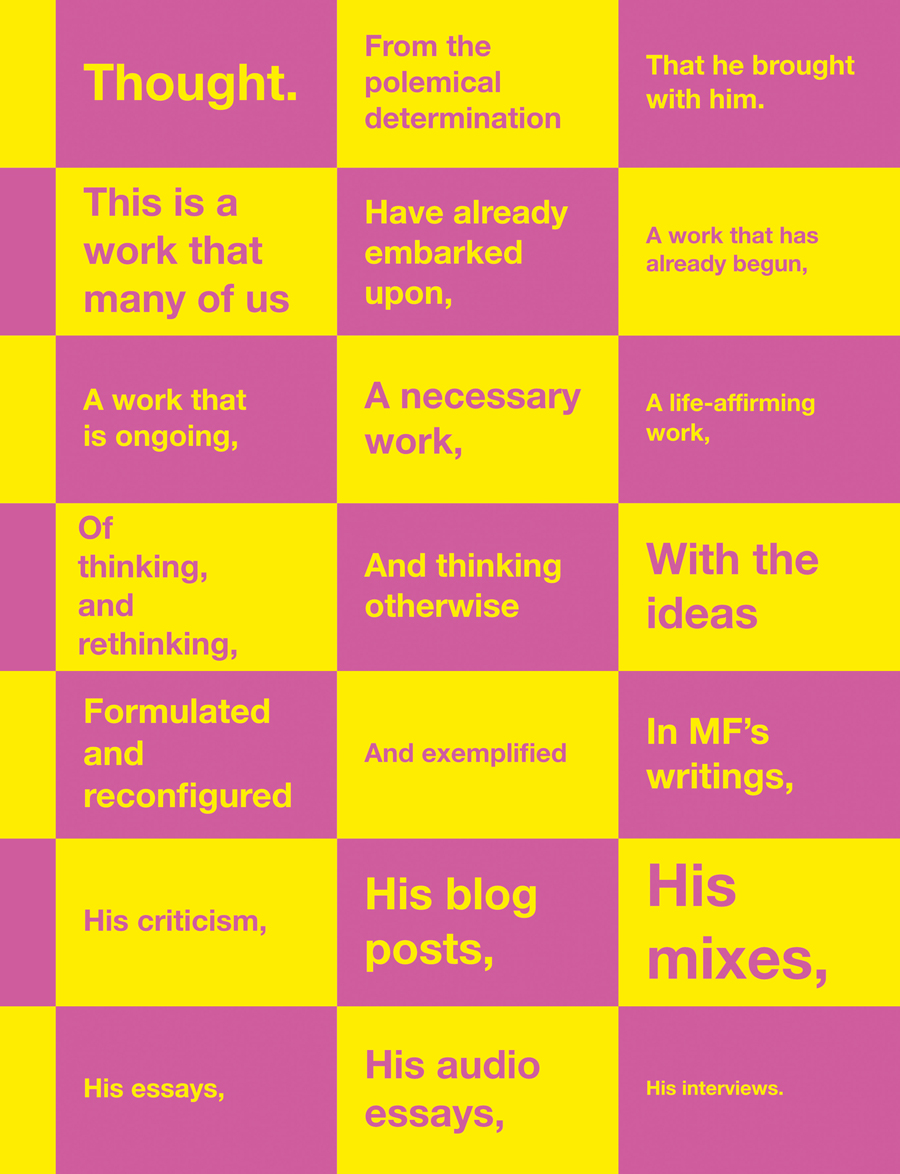 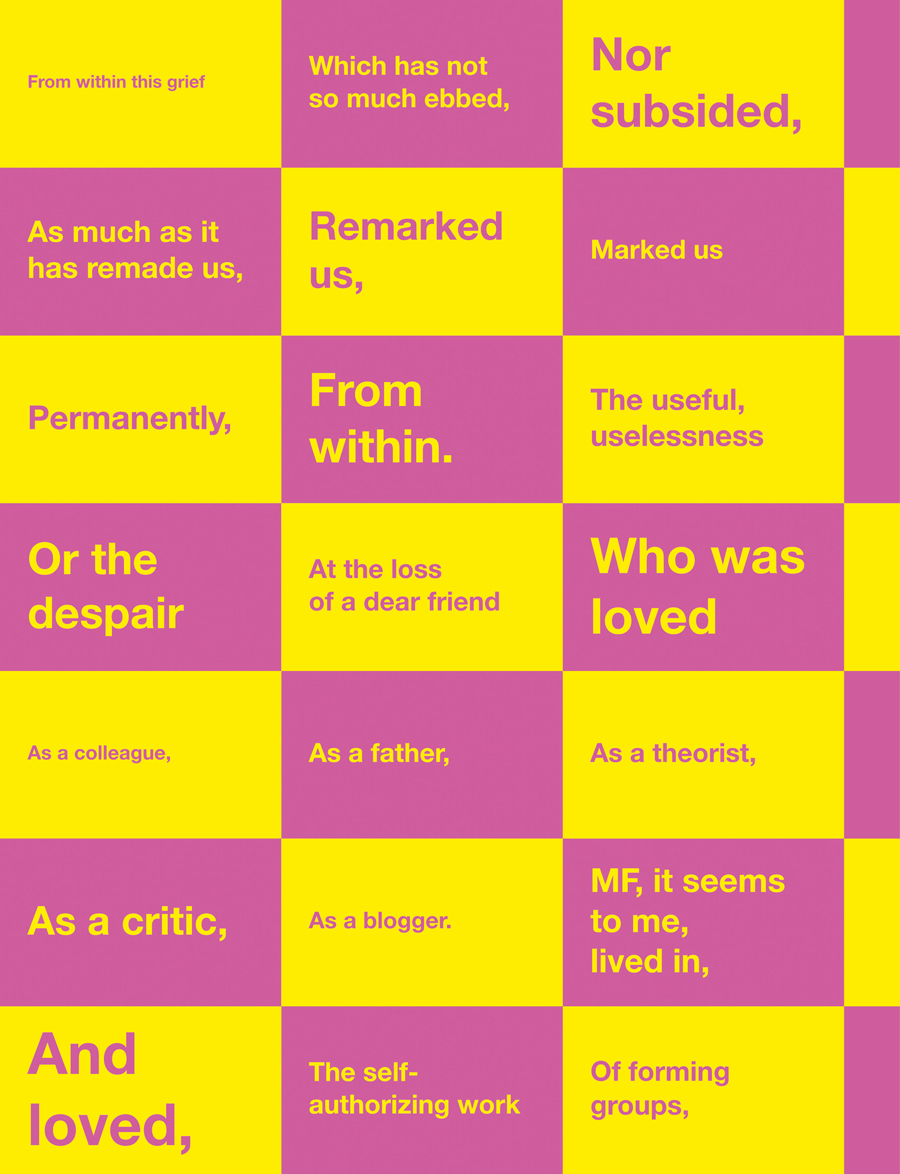 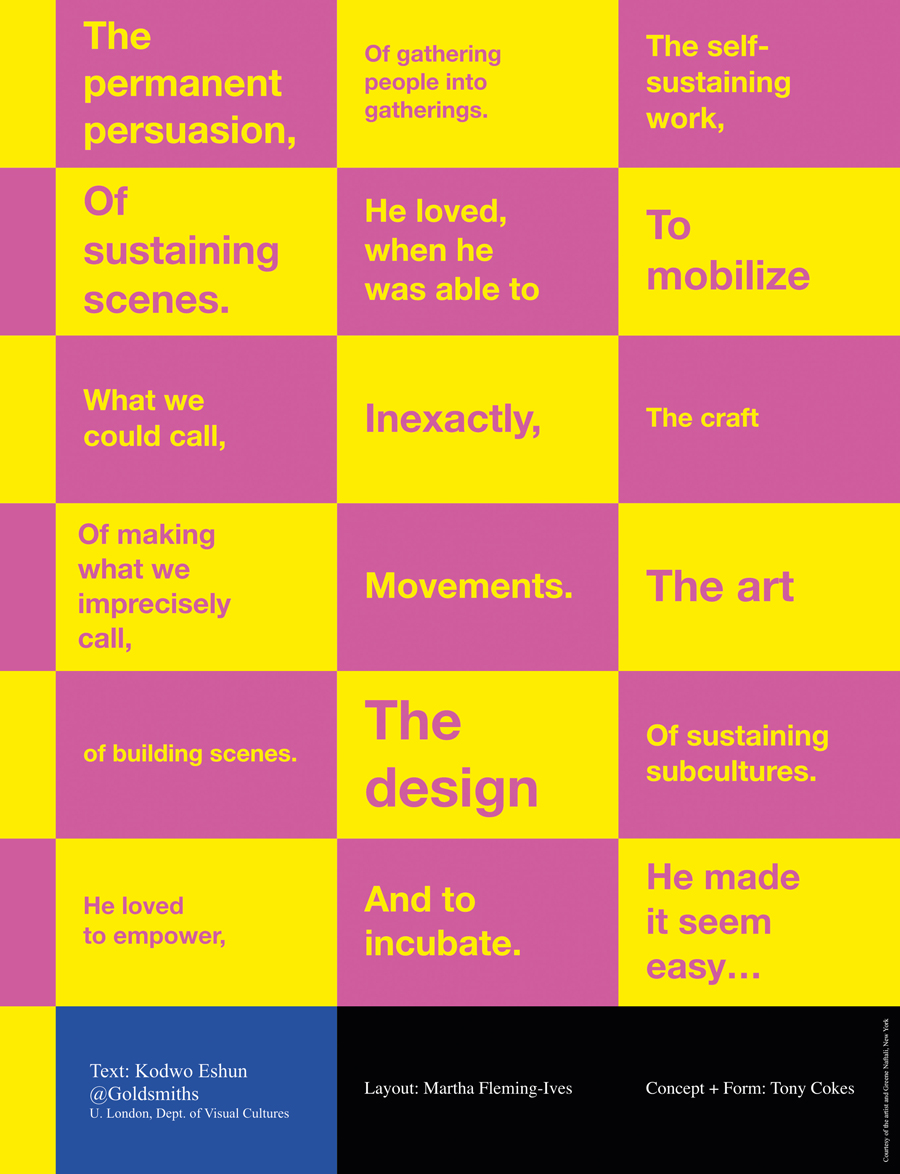 Tony Cokes is an artist based in Providence, USA. In 2018, he had solo shows at Bergen Kunsthall, Norway, Kunstnernes Hus, Oslo, Norway, and Greene Naftali, New York, USA, and his work was included in the 10th Berlin Biennale, Germany, as well as group exhibitions at S.M.A.K., Ghent, Belgium, and Galerie Nathalie Halgand, Vienna, Austria. In 2019, he has had a solo show at Hannah Hoffman Gallery, Los Angeles, USA, and his work was featured in a group exhibition at the Museum of Modern Art, Warsaw, Poland. Later this year, he will have solo shows at Tate Film’s cinema programme, London, UK, Atlanta Contemporary Art Center, USA, The Shed, New York, and Goldsmiths CCA, London, and will participate in the Ruhrtriennale, Germany, and Intonal Festival, Malmö, Sweden.