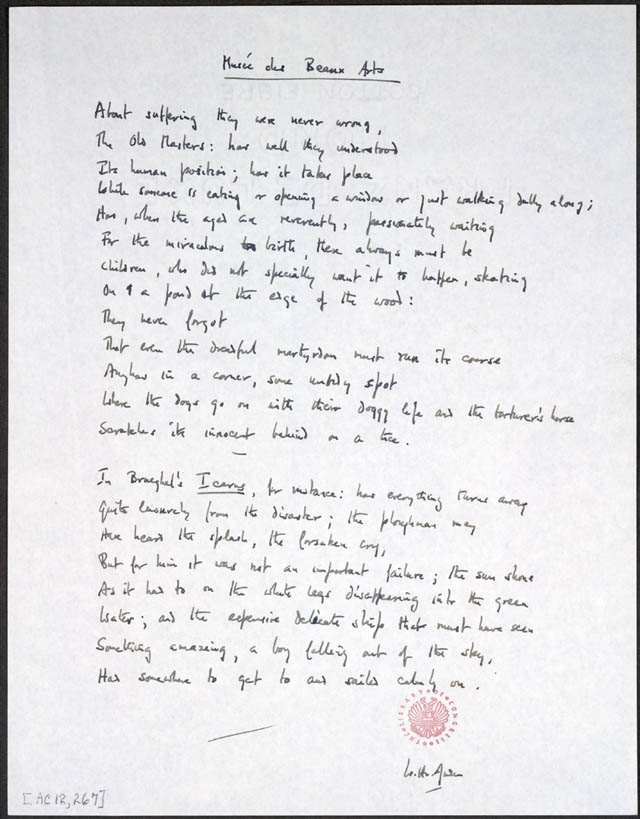 Written in the form of interviews between Beckett and Duthuit, these texts were composed entirely by Beckett. Each takes a contemporary painter as its theme, but devolves into an “analysis of the relation between an artist and his occasion”. The tone is peremptory; the prose riddled with paradox. Beckett calls for “the expression that there is nothing to express, nothing with which to express, no desire to express, together with the obligation to express”; for an art “too proud for the farce of giving and receiving.” In our culture of fluently transmitted artistic brands, Beckett’s dismissal of “art and craft, good housekeeping, living” is abrasively challenging.

A poetic meditation on painting’s ability to comprehend the contingency that must puncture the afflatus of dramatic narrative in order for it to represent recalcitrant reality.

Written during the last 18 months of Wittgenstein’s life, Remarks on Colour is a fragmentary collection of short, speculative propositions. The prose is, by turns, phenomenologically reductive and expansively metaphysical. His subject is the relativism of perception, and the question of whether or not colour might be amenable to theory, but his enquiry comprehends the essential mystery of the relation between a painting and the reality it depicts.

Gowing’s tender, luminous lecture takes as its theme the ‘failure’ of the 18th Century Welsh landscape painter Thomas Jones, whose plein air oil sketches have only gained their reputation since the 1950s, and are now considered radical precursors of Constable and the French Impressionists. The text is possibly enriched by a personal angle, in that Gowing, like Jones, was a British painter who was sidetracked from his art. Jones returned from his Italian tour, where he made the oil sketches for which he is best known, to become a gentleman farmer in his native Wales. Gowing worked increasingly as a teacher and writer in the latter part of his career. But his text resolves itself as a tale of heroic triumph against the odds, a highlighting of the arbitrary nature of culturally conferred value; how what we see in a painting is what our time allows us to see.

James Fenton
Johns: A Banner with a Strange Device (1998)

When Fenton, a British poet and essayist, has written about visual art he has tended to focus on sculpture, but this is a generous and deeply informed account of how Jasper Johns’ evasive self-presentation is intimately bound up with his evasive art. The essay connects tangentially with my first entry, in that Johns and Beckett collaborated, in 1976, on an artist’s book, with Beckett choosing the etching for the cover. At the time, Beckett remarked, I think approvingly, “Here you try all these different directions but no matter which way you turn you always come up against a stone wall”.

Recorded sporadically between the 1950s and the 1980s, these are discussions between an art critic and a painter who were also friends. The interviews explore the tensions between 20th Century painting’s bias towards abstraction, and a desire to empirically represent a specific subject. Bacon is constructing an image of himself as an existential outlaw living among his Kensington studio, Soho watering holes, London casinos and The Ritz. But this self-mythologising is indistinguishable from his rigorous attempt to define painting as a game of chance in which the artist is cast as the critic of his own serendipity.

Bois’s analysis of Ryman willfully elicits contradictions from a reductive premise. Ryman is shown to elude the logical parameters which his work initially suggests. An attempt to reduce painting to a deterministic methodology is unable to contain an inevitable “residue of arbitrariness”. It is as though Bois is setting up his own critical apparatus to fail in the face of Ryman’s ultimate elusiveness.

Passion is a self-reflexive movie about a Polish film director – played by a Polish film director – struggling to fund a film which reconstructs, as staged mises en scène, some of the great compositions of Old Master painting. A camera roams through ‘painterly’ space, lingering over the models as they pose in their 17th Century costumes. The contextual scenes, in which the cast – who are also ‘the cast’ – farcically blunder around 1980s Switzerland, pitch a new image language out of the medium of colour film, which is implicitly asked to measure itself against the relative “depth of field” of pre-modern painting.

Ashbery wanted to be a painter before he was a poet, and he earned his living for many years as an art critic. Recently, images of a suite of his surrealistic collages were published in the Paris Review. His poem Self-Portrait in a Convex Mirror takes its cue from a self-portrait of Parmigianino. The distorted image in the curved mirror reflects Ashbery’s own poetic idiom, in which the allusive density of poetic language is given free rein to meander, and subjectivity is filtered through a plethora of eavesdropped “I”’s, all merging into one another. The poem’s metaphorical symmetry relies on that idiom doubling as a metaphor for the circuitous workings of painterly representation.

Terse, antagonistic, mutually misunderstanding, this interview reads as a dramatic dialogue as much as wide-ranging historical enquiry. Buchloh asserts the conceptual rigour of the academic in contrast to Richter’s laconic ambivalence, and Richter prevails because his wary tolerance of ambiguity is truer to the subject, painting, and its resistance to serving a didactic narrative.