Triumphant in her vengeance, Mary Beth Edelson’s transformed mannequin Kali Bobbit (1994) is a welcome sight in these dark times. Brandishing a butcher’s knife and a severed phallus in two of her six hands, her hips strung with a girdle of blades, the sculpture – the centrepiece of Edelson’s solo exhibition, ‘The Devil Giving Birth to the Patriarchy’ – cuts a warrior’s silhouette against the lower Manhattan skyline, visible through the windows of David Lewis Gallery.

A prominent participant and agitator in the feminist art movement of the 1970s, Edelson is long overdue attention from US institutions – her most recent retrospective toured four university art museums from 1988 and 1990. The close affinity between Edelson’s early output and the feminist spirituality that took shape in the 1970s, with its emphases on the body and an overarching female deity, resulted in critical disdain for her work in the theory-heavy 1980s – a tension that continued to rankle in 2007’s large-scale touring show ‘WACK!: Art and the Feminist Revolution’, where earnest engagements with the ‘Goddess’, such as Edelson’s, were quietly excluded. This exhibition at David Lewis Gallery does a service to Edelson’s work from the early 1970s, positioning it alongside the later, and more raucously combative, Kali Bobbit as part of a singular, coherent vision of resistance.

The exhibition opens with its earliest work, a series of hand-altered photographs from 1973, collectively titled ‘Woman Rising’. Hung in one row, the 17 prints included here are from only two exposures that document actions carried out in private by Edelson on North Carolina’s Outer Banks. Naked, her stomach and nipples ringed with paint, Edelson photographed herself head-on in assertive poses: legs planted wide apart, arms raised in a stance adopted from Predynastic Egyptian statuary. Seen together, Edelson’s alterations of these self-portraits with paint, marker pen and collaged elements produces the impression of serial transformation: here, the artist toys with being Wonder Woman; there, she appears as a praying mantis; there again, a bloody-mouthed hound emerges from her vagina. If Edelson’s experimentation with various avatars prefigures Cindy Sherman’s prop-based cycle through different female stereotypes, it also reflects a central concern of 1970s feminist theory: the performance of the self. Onto one photograph of Edelson holding her breasts (a pose borrowed from Mesopotamian figurines), the artist has inked a television over her head, from which a large, unlidded eye stares out. With its scratchy, hand-written inscription (‘Seeing you looking at me’) the work forms a counterpart to Laura Mulvey’s 1973 dissection of the male gaze in film, ‘Visual Pleasure and Narrative Cinema’.

In the main gallery, two later works testify to Edelson’s continual experimentation with an array of media and formats to articulate her vision of female empowerment. Rearing up on a plinth opposite the doorway, Kali Bobbit is a rare example of theatrical, life-sized figure sculpture allied to a feminist agenda, having originally formed part of the artist’s ‘Combat Zone’ ensemble, a 1994 Creative Time project in which Edelson converted a SoHo shopfront into a dialogue-and-resource-filled space for countering domestic violence. A field of paper collages, dating from the early 1970s, wraps around the gallery walls, enveloping the sculpture. Edelson began deploying these collages as large-scale installations in the 2000s. Here, small black and white reproductions of a miscellany of winged creatures and cellular organisms, crossed with the features and bodies of women past and present, ascend the gallery’s walls like spores carried on a breeze. It is fitting that this marshalling of vital images is Edelson’s most ambitious to date in terms of scale and critical mass: the times require no less. 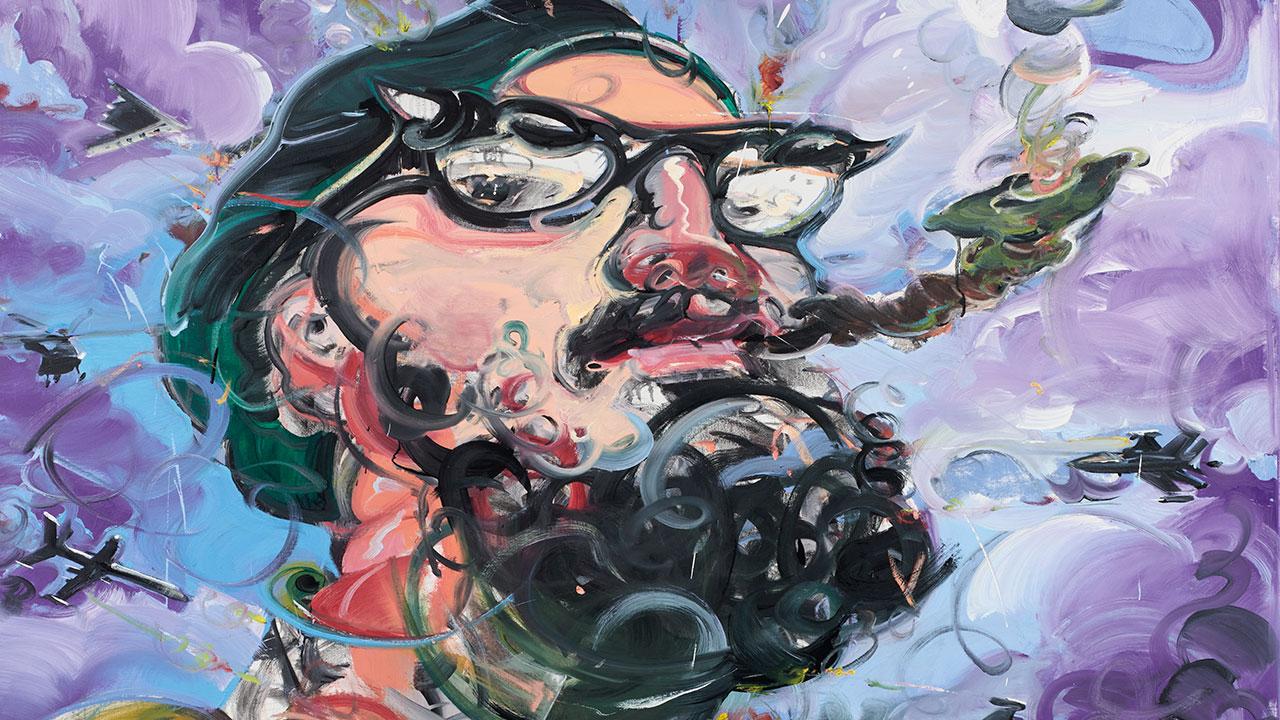