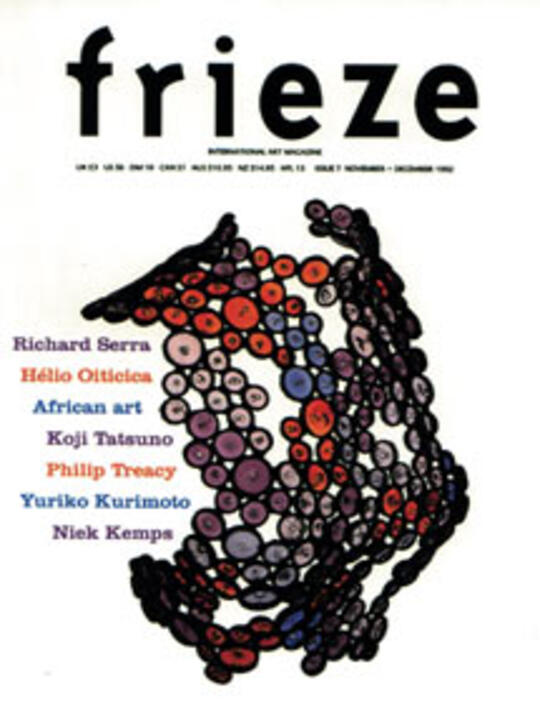 More discussion has been given to the renovation of Mary Bounds Gallery than to any contemporary art exhibition that has opened in New York during this economically recessed and pre-Presidential autumn of 1992. For over ten years the building at 417 West Broadway has been the virtual centre of New York's gallery galaxy: Mary Boone has come to represent the 80s art boom, and could possibly even be credited with having created it. But what now, when those once tidal collecting waters have subsided to a tiny faucet drip? If we've come to expect and accept Jenny Holzer’s High-80s maxim, that 'money creates taste', where does taste go when money runs dry?

According to the fancy face lift at 417, when the going gets tough, the tough get French. Ln one of the most bizarre and compelling refurbishments of any visual art institution since I.M. Pei's pyramidisation of The Louvre, Boone has introduced a Louis XIV tableau vivant into the sterility of her haute modeme white cube. A mis en scène whose controlled theatri-cality echoes the taut sadomasochism of Peter Greenaway mingled with the désirer and nostalgie of Madame Bovary, the composition foregrounds a del-icate and consciously impractical writing table, a haute-cozy upholstered court chair, and an attractive Aryan man, all set against a back drop of high-tech functionalism. Even the floors, once terracotta tile, are now French: white limestone.

The ebonised writing table, with bronze and tor-toiseshell ormolu and gilt fluted legs topped with fox-like heads, is fairly representative of the Louis XIV style, which was a bit toned down compared to earlier styles of the ancien regime but still recognis-ably posh by modern day standards. Purchased sometime during the last decade from Drouet, the Paris auction house, Boone's piece is dated circa 1780s.1n her gallery it is accompanied by a salon style chair upholstered in gold threaded cream damask, from the same period, though never intend-ed for an office career; its provenance is unknown. The blond gentleman, the only animate item in the tableau, is dressed in the conventions of late 20th century Euro-American men's wear and, as is typical of male costumes of this period, he usually wears at least one thing that is navy. And his clothes change daily. The contemporary attire of the Aryan man, and of his visage, contrast with the two wooden memo-ries of the 18th century and place him in closer aes-thetic and historical proximity, as well as use value to the functional elements of the setting, most of which are in noir: two push button wall phones, an IBM Selectric typewriter with stand intended for a televi-sion, a wall of vinyl binders alphabetised from Artschwager to Stephan, two rows of wall-recessed drawers, a two-plug electrical outlet, and a grid of sixteen dimmer switches.

The scene is an unstable enactment of austere intimidation and intense vulnerability. Does Boone mean to suggest that a bourgeois revolution is imminent and beware the guillotine? Or is her tabernacle to the time of Marie Antoinette actually an ahistorical paean to post-WWII Paris, a prayer to the place that gave New York the ideas, artists and galleries that eventually led to the hyper-speculation and, for Boone, the multi-million dollars, of the High-80s? Perhaps the so-overt exposure of the gallery employ-ee trapped by court furniture is meant to imply both that Boone is still rich and still working? And his uncomfortable working conditions - including a lack of privacy similar to that experienced by wax figures in Madame Tussaud's; a typewriter set too low by its placement, for design purposes only, on a TV stand; a desk surface not much larger than the tray to a toddler's high chair; and visibly unreachable resource materials - are perhaps meant to mimic the Sisyphean feeling Boone is experiencing now, as she heroically attempts to push art prices up, even as they keep rolling back down again.

For maybe the French ensemble, while seemingly the centre attraction, is actually the backdrop - and the full-walled bookcase is the crucial piece of iconography in this crypto-pictorial. The bookcase is a truly formidable fortification of thick black vinyl binders. Each binder contains artists' slides on the inside, and outside, all in caps, the name of the artist. The library-style towering wall, whose top three shelves are unreachable without the aid of a ladder, historicises the artists. But, perhaps more important, the highly visible placement of this private biblio-theque allows, even forces, visitors to reckon with the specific magnitude of Boone's stable - and can successfully quelch wrong-minded rumours regard-ing runaways. The next time I hear, for instance, that a certain artist has fled to Larry Gagosian, I'll just run into 417 West Broadway and look for verification in the presence or absence of any thick vinyl binders labelled 'Sherrie Levine'.